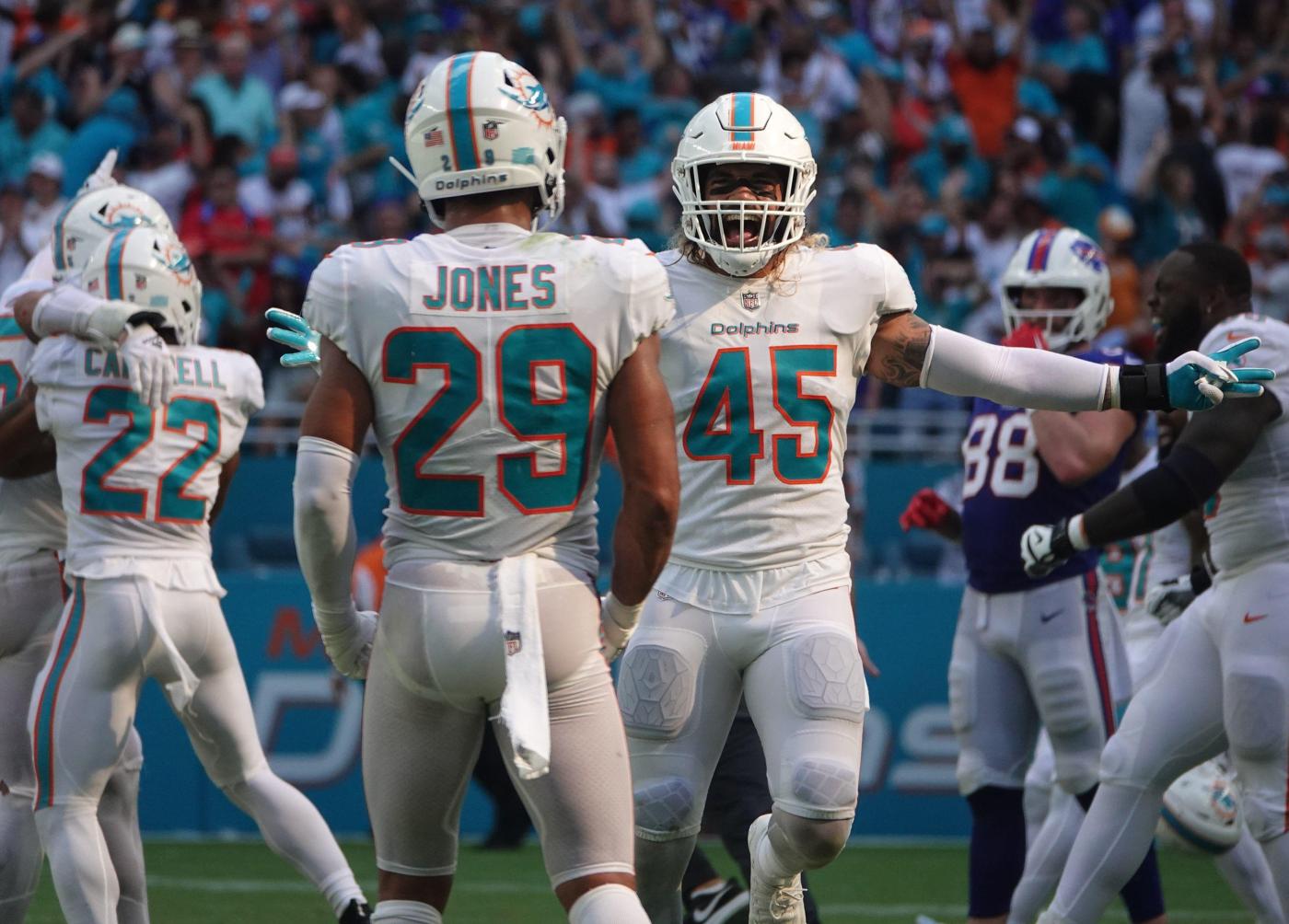 Christian Wilkins was preaching late Sunday afternoon, brothers and sisters, but before he talked about this nastiest Miami Dolphins win, before he addressed the grittiest little goal-line stand or the glory of this 3-0 start, he asked something himself.

“Come on, can I get an, ‘Amen!’” the Dolphins defensive tackle asked again.

Sunday’s 21-19 win over Buffalo, where the Dolphins practiced what they preached, probably deserves something more, too. Hallelujah? Lord have mercy?

For the first time in years — or decades depending how you frame — the Dolphins won the kind of game in the kind of scheduling stretch that says they belong in the conversation of contenders. That’s it. That’s the hallelujah moment.

They’ve now beaten New England, Baltimore and top-of-the-heap Buffalo in their first three games, and that’s as good a line-up as any team has put down thus far. They weren’t electric Sunday. They were just good enough against their most important measuring stick right now.

Buffalo had drives longer than some television mini-series. Fourteen plays. Twenty plays. And then the most important of all, a 17-play series late in the fourth quarter, where they had first-and-goal at the Miami 2-yard line and trailing 21-17.

“We made four plays,”’ Wilkins said.

Buffalo quarterback Josh Allen then got the ball again with 1:33 left and just needing a field goal thanks to a Dolphins punt that ricocheted off a Dolphins player into a safety. Most teams don’t survive Allen getting two cracks like that. Defensive coordinator Josh Boyer’s defense did.

So something has changed. This defense has grown up from the team that got dragged around the field at the end of last season in Tennessee. This team has changed, too, after losing seven straight games to Buffalo.

“It was special for everyone involved in that regard, as special as a Week 3 regular-season game can be,” first-year coach Mike McDaniel said. “I will say that much, but we know that we’re going to see them again. If they at all took us lightly at all, I promise you they won’t again, so we’re going to get their best shot. That’s a really, really, really good football team.”

The Dolphins won Sunday. They made just enough big plays to take the day. Holland blitzing Allen into a fumble and Melvin Ingram recovering at the Buffalo 6-yard line to set up a touchdown? Tua Tagovailoa returning from injury for a 45-yard throw to Jaylen Waddle on third-and-22 to set up another touchdown?

“I was wishing and hoping I was open,” Waddle said.

Players were dropping especially on the Buffalo side, mostly from the heat. Buffalo lost 13 players from the start of the game, reinforcing that a Dolphins home game in September is the biggest home-field advantage in sports. Buffalo already had their entire secondary out with injuries, too.

The Dolphins lost players, too, and the day turned nasty as it went on. Allen was flagged for a personal foul late in the game. What happened?

That was the entire day. Just football stuff. Allen is a beast, passing for 400 yards, running for 46 more and getting two chances in the final minutes to win the game — and not winning. There’s little doubt he’ll be waiting at the end of October when the Dolphins go to Orchard Park. And that’s good. It means this rivalry can mean something again.

“This is one game,” Allen said. “We’ll learn from this one tomorrow, take it on the chin and again prepare for next week.”

The Dolphins will learn, too. They’re believers. But then most Dolphins teams have been believers over the last couple of decades until results show them otherwise. This start suggests something different is happening.

“Three-and-oh is not our goal,” Wilkins said.

“You don’t want to do yourself a disservice and fall short of your potential,” McDaniel said.

Yes, it’s September and there’s a long way to go. But when’s the last time you could say the Dolphins had to be mentioned among the contenders for anything but the No. 1 pick in the draft? When’s the last year you looked ahead at the good possibilities?