Todays Though > News > Have Heat failed by not hoarding picks, or has NBA failed by allowing such gluttony? – Boston Herald
News

Have Heat failed by not hoarding picks, or has NBA failed by allowing such gluttony? – Boston Herald 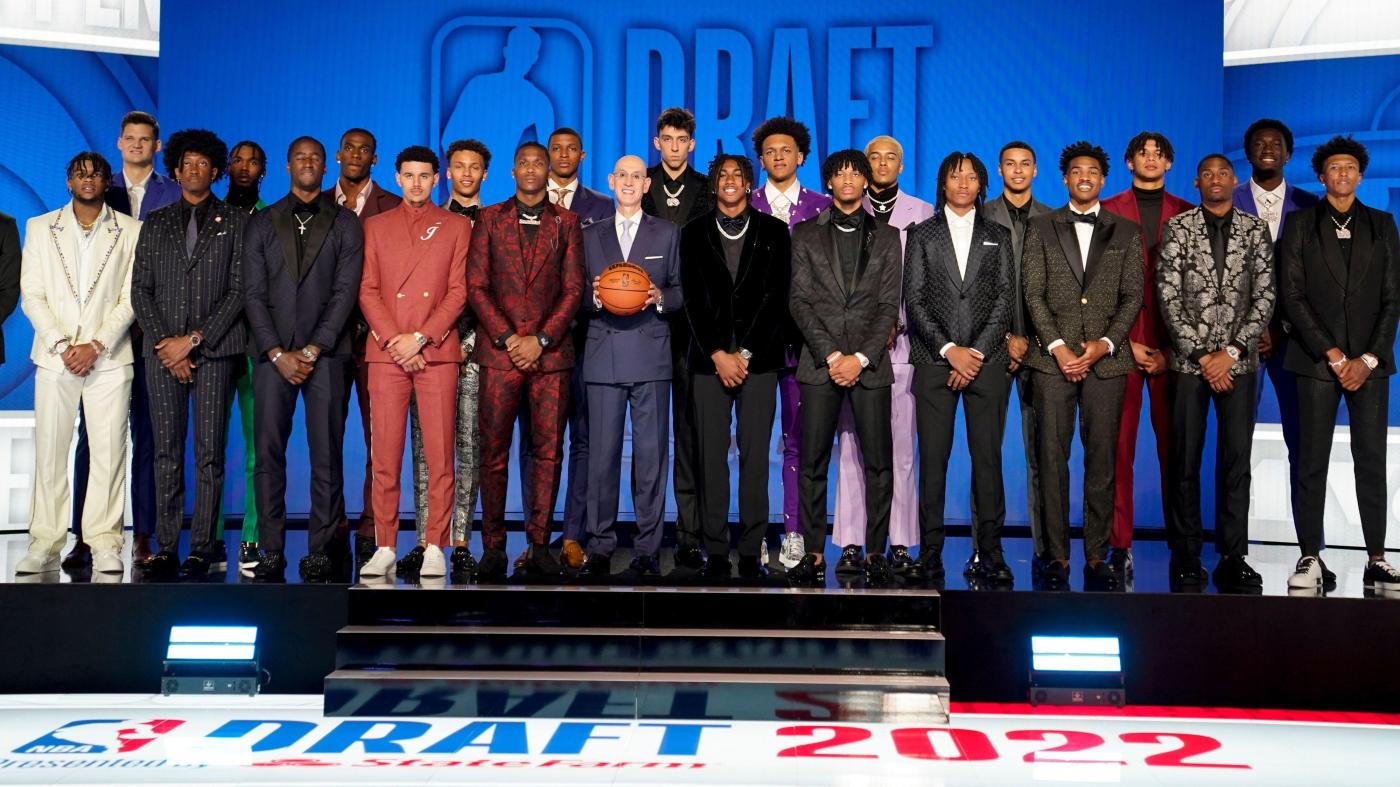 When exactly was the last time a fan attended or tuned in to watch NBA draft choice play?

No, not talking about a draft pick that after being exercised turned into an actual walking and breathing and dunking and shooting human being, one with a name and number.

But rather the future picks that teams have been hoarding this offseason and during recent offseasons.

After getting four first-rounds picks for Rudy Gobert, Utah Jazz CEO Dany Ainge appears to be in the market for even more for Miami Heat trade target Donovan Mitchell,

Only none of those draft picks are lining up this season (and most not in the near future) to actually play for the Jazz. It’s as if Ainge plans to line up a series of NFTs at Vivint Arena and insist they’re worth something.

For all of the consternation of NBA Commissioner Adam Silver at his media session in Las Vegas about players demanding trades, perhaps there is a greater concern at play.

It used to be that when teams sent out packages of picks, it was considered trading away their future.

But what about the other end of the spectrum, teams selling future hope while charging real-time pricing for a product mortgaged for the future?

In 1981, the NBA instituted a rule prohibiting teams from trading away successive future first-round picks. So, instead, teams are trading away every-other-year first-round selections, three (or more) at a time. And when first-round picks can’t be traded because of that rule, then pick swaps have become the workaround (basically, if the acquiring team has a better record in that year, it can swap out to the more advantageous draft position in the first round with the trade partner).

Question: With the decision to prematurely (and thankfully) cut short The Process in Philadelphia, wasn’t that when a signal was being sent? It was a bad look for the league, and even worse look with what the 76ers had put on the court.

And for all the credit given Oklahoma City Thunder and the genius of Sam Presti for hoarding selections, the payoff — if there is to be a payoff — appears years away.

When selling the future, there is no imminent risk of acknowledging failure. Sam Hinkie essentially made that the campaign platform in Philadelphia.

And the reality is that the future picks are not necessarily even harvested, with the Knicks attempting to broker their picks from a 2022 draft night tossed aside, in the hope that Ainge will take them for Mitchell.

What free agency has shown in recent years is there is a carnivorous appetite for the NBA transaction period, Woj and Shams as the sentinels to revived hope with each tweet of Player X going to Team A.

Except these days, it often results in Team B winding up instead with a package of picks. Not even a name to put on a jersey.

The solution, and it would appear relatively simple, would be to limit the amount of years out teams can trade future picks. The rule prohibiting the trade of first-round picks in consecutive future years, only goes so far. A three-year-out limit on trading first-round picks would deliver the conversation back to the moment.

Is there a single NBA fan, a true NBA fan, who right now is thinking about the 2025-26 season?

Pick hoarding is criminal in terms of real-time hope. It robs the moment, even with it being a zero-sum game with only 30 such picks each year.

So, yes, the Heat seemingly lack the first-round capital to create a robust position for a trade for Kevin Durant or Mitchell … because they have dared live in the moment under Pat Riley.

As for those pick swaps? Who exactly believes they can benefit with a swap of first-round position with the Heat? The last time the Heat’s draft position placed them in the Top 10 was when Justise Winslow was selected at No. 10 in 2015.

Some teams live in the moment, making the moment matter.

Others sell hope of futures that may never arrive. Yes, Ainge, while with the Celtics, fleeced the Nets with the deal of aging Paul Pierce and Kevin Garnett that turned into the picks for Jaylen Brown and Jayson Tatum. There are exceptions to every rule.

But the NBA should not be a waiting game.

It should be played in real time.

MISSING MAN: Although no longer a part of the team, P.J. Tucker clearly retains a place in the Heat’s thoughts. In the wake of Tucker’s free-agency departure to the Philadelphia 76ers, both Caleb Martin and Haywood Highsmith cited Tucker’s influence while addressing the media at the NBA Las Vegas Summer League. “Tuck was a big asset for us, man, and guys know what he brought to our team and our locker room every day,” Martin said. “That’s hard to replace. But we got a great group of guys, man. We got great leaders in the locker room.” Highsmith revealed that the first thing he did after joining the Heat last season was to request video of Tucker. “I asked for tape on P.J. as soon as I got there,” Highsmith said. “I just watch him because he’s just such a dawg in the way he plays. I want to play like that.”

DULY IMPRESSED: Among those Heat summer-league guard Kyle Allman Jr. went against while playing in the French League was Victor Wembanyama, the projected No. 1 pick for the 2023 NBA draft who has drawn comparisons to Giannis Antetokounmpo. And, yes, Allman said he was duly impressed by the versatile 7-foot-2 big man. “He’s huge,” Allman said. “So he kind of alters the way you play a little bit. You’ve got to put your layups a little higher. You’ve got to focus on him a lot. He’s really skilled. It was tough playing against him. He was really good.” Allman wasn’t willing to go as far as to predict No. 1 for Wembanyama. “I don’t really get to watch college a lot, because I’m nine hours ahead,” he said of being based in France. “But I think that would be a pretty good No. 1 pick.”

BETTER PLACE: The 2021-22 Brooklyn Nets apparently was as miserable an experience as it seemed from the outside. At least that’s how former Heat guard Goran Dragic characterized it in an interview with Slovenian newspaper Vecer. “I played with some stars, like Kevin Durant and Kyrie Irving, and I have to admit that it was quite difficult because the focus was not the team, but more the individual performances,” Dragic, 36 said, according to a translated transcript. Instead, Dragic watched the latter stages of the playoffs at FTX Arena, before joining the Chicago Bulls earlier this month in free agency. “It was really tough last year, but that’s part of the sport,” Dragic said. “I’m happy that I came to the club environment that I wanted, in which I know that I will play, where I can get to consistency again.” Dragic’s whirlwind began in August, when his contract had to be put in play in the Heat’s sign-and-trade with the Toronto Raptors for Kyle Lowry. He then was dealt at midseason to the San Antonio Spurs, in a salary-cap maneuver, bought out by the Spurs, and then signed with the Nets.

CASE CLOSED: During his appearance on The Long Shot Podcast of teammate Duncan Robinson, Heat captain Udonis Haslem made clear just how much in his rearview mirror his March bench-side dustup with teammate Jimmy Butler stood. “At the end of the day, I love the hell out of Jimmy,” Haslem said. “Jimmy’s my brother. He’s very intelligent. He taught me how to make coffee in the [2020 Disney quarantine] bubble. I spent time with him. I learned to make coffee taking classes with Jimmy, barista classes.” Haslem operates South Florida Starbucks locations, while Butler markets his Big Face Coffee brand.

$11.5 million. Differential between the three-year, $32 million free-agency contract received by Charlotte Hornets forward Cody Martin and the three-year, $20.5 million free-agency contract twin brother Caleb Martin got with the Heat. “You know what I think about that,” Caleb Martin said with a smile. “But at the end of the day, that’s my brother. I love him to death. If I could wish for somebody to make more money than me, it would be him.”