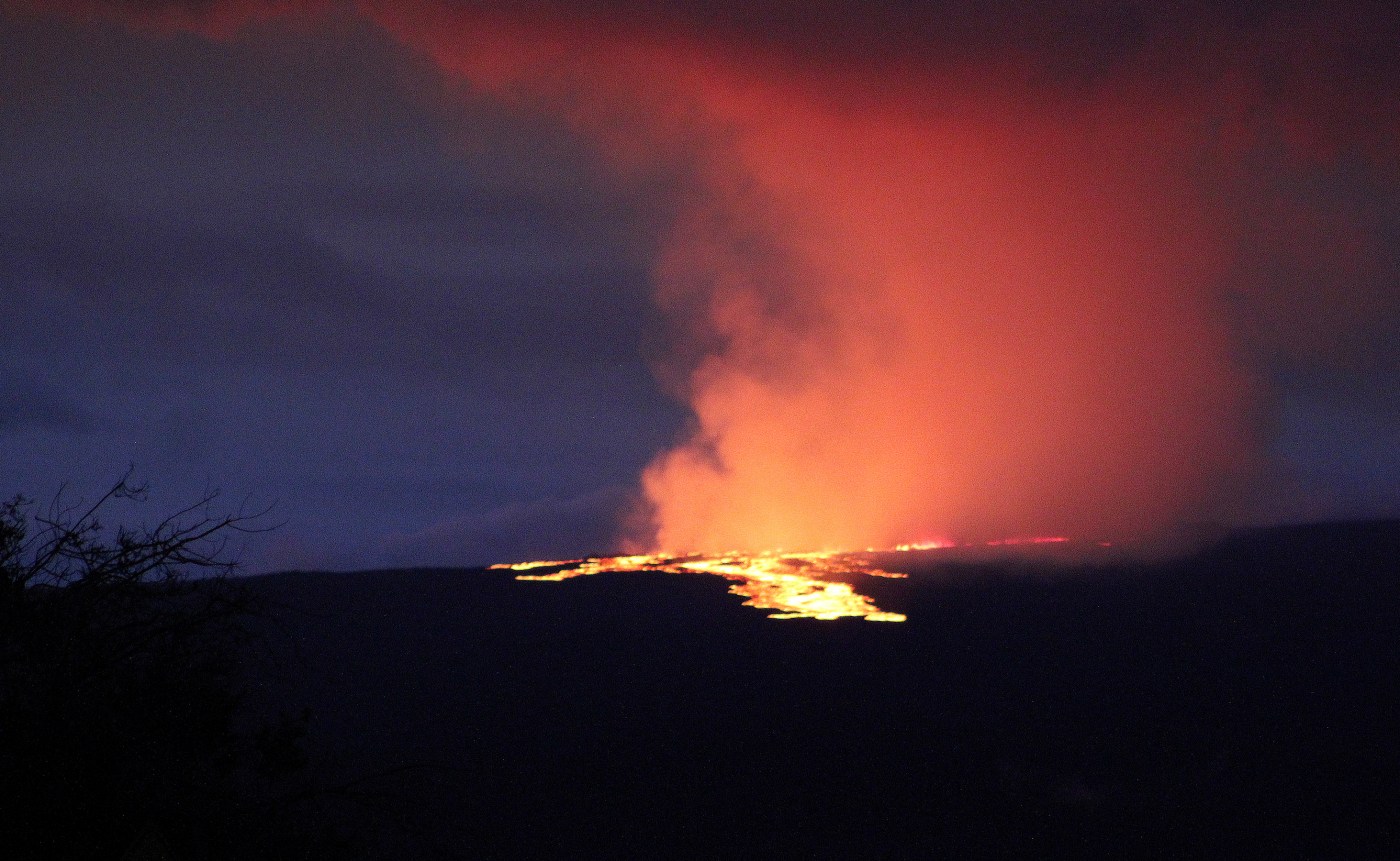 The eruption of Mauna Loa wasn’t immediately endangering any towns, but officials told residents to be ready for worse.

Many now living in the area weren’t around when Mauna Loa last erupted 38 years ago. The U.S. Geological Survey warned the roughly 200,000 people on the Big Island that an eruption “can be very dynamic, and the location and advance of lava flows can change rapidly.”

Lifelong Big Island resident Bobby Camara, who lives in Volcano Village, said everyone across the island should be alert and keep track of the eruption.

“I think everybody should be a little bit concerned,” he said. “We don’t know where the flow is going, we don’t know how long it’s going to last.”

He said he’s seen three Mauna Loa eruptions in his lifetime and knows that people need to be vigilant.

Gunner Mench, who owns an art gallery in Kamuela, said he awoke shortly after midnight and saw an alert on his phone about the eruption.

Mench and his wife, Ellie, ventured out to film the eruption’s eerie red glow over the island and watched as the lava spilled down the side of the volcano.

“You could see it spurting up into the air, over the edge of this depression,” Mench said.

“Right now it’s just entertainment, but the concern is” it could reach populated areas, he said.

There’s been a surge of development on the Big Island in recent decades — its population has more than doubled, from 92,000 in 1980.

More than a third of the island’s residents live either in the city of Kailua-Kona to the west of the volcano, which has about 23,000 people, and Hilo to the east, with about 45,000. Officials were most worried about several subdivisions about 30 miles (50 kilometers) to the south of the volcano, which are home to about 5,000 people.

A time-lapse video of the eruption from overnight showed lava lighting up one area, moving across it like waves on the ocean.

The U.S. Geological Survey said that the eruption had migrated to a rift zone on the volcano’s northeast flank. Rift zones are where the mountain rock is cracked and relatively weak — making it easier for magma to emerge.

An eruption from the northeast could send lava toward the county seat of Hilo or other towns in East Hawaii but it could take the lava weeks or months to reach populated areas. It’s possible the eruption may later shift to a rift zone on the southwest flank. Lava emerging from this area could reach nearby communities in hours or days.

“We don’t want to try and second-guess the volcano,” Hon said. “We have to let it actually show us what it’s going to do and then we inform people of what is happening ASAP.”

Hawaii County Civil Defense announced that it had opened shelters because it had reports of people evacuating from along the coast on their own initiative.

The average Mauna Loa eruption is not typically prolonged, lasting a couple of weeks, Hon said.

“Typically, Mauna Loa eruptions start off with the heaviest volume first,” Hon said. “After a few days, it starts to calm down a little bit.”

The USGS warned residents who could be threatened by Mauna Loa lava flows to review their eruption preparations. Scientists had been on alert because of a recent spike in earthquakes at the summit of the volcano, which last erupted in 1984.

Portions of the Big Island were under an ashfall advisory issued by the National Weather Service in Honolulu, which said up to a quarter-inch (0.6 centimeters) of ash could accumulate in some areas.

Mauna Loa is one of five volcanoes that together make up the Big Island of Hawaii, which is the southernmost island in the Hawaiian archipelago.

Mauna Loa, rising 13,679 feet (4,169 meters) above sea level, is the much larger neighbor of Kilauea, which erupted in a residential neighborhood and destroyed 700 homes in 2018. Some of Mauna Loa’s slopes are much steeper than Kilauea’s, so lava can flow much faster when it erupts.

During a 1950 eruption, the mountain’s lava traveled 15 miles (24 kilometers) to the ocean in fewer than three hours.

Tourism is Hawaii’s economic engine but Big Island Mayor Mitch Roth predicted few problems for those on vacation during the eruption.

“It will be spectacular where it is, but the chances of it really interrupting the visitor industry — very, very slim,” he said.

For some, the eruption might cut down on some travel time, even if there is more volcanic smog caused by higher sulfur-dioxide emissions.

“But the good thing is you don’t have to drive from Kona over to Hawaii Volcanoes National Park to see an eruption anymore,” Roth said. “You can just look out your window at night and you’ll be able to see Mauna Loa erupting.”

Julia Neal, owner of Pahala Plantation Cottages, said the eruption brings some relief after many preparedness meetings, and much wondering about what the volcano will do.

“It’s exciting,” she said. “It’s kind of a relief that it’s happening and we’re not waiting for it to happen.”

A few future guests from the U.S. mainland called Neal “asking me to make a prediction, which I can’t,” she said. “So I said, just stand by.”