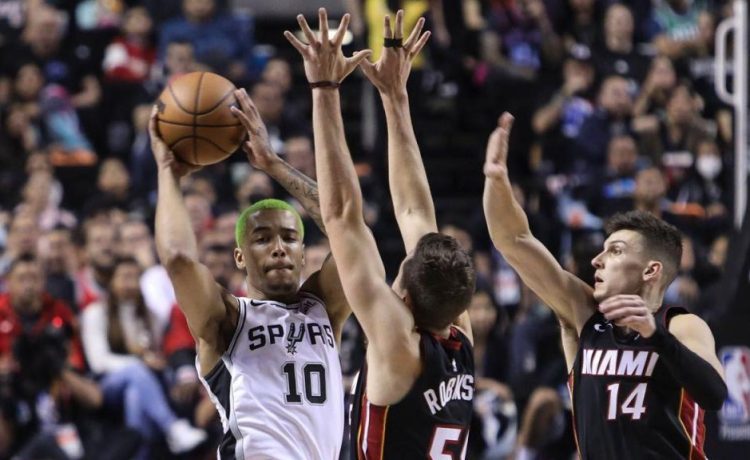 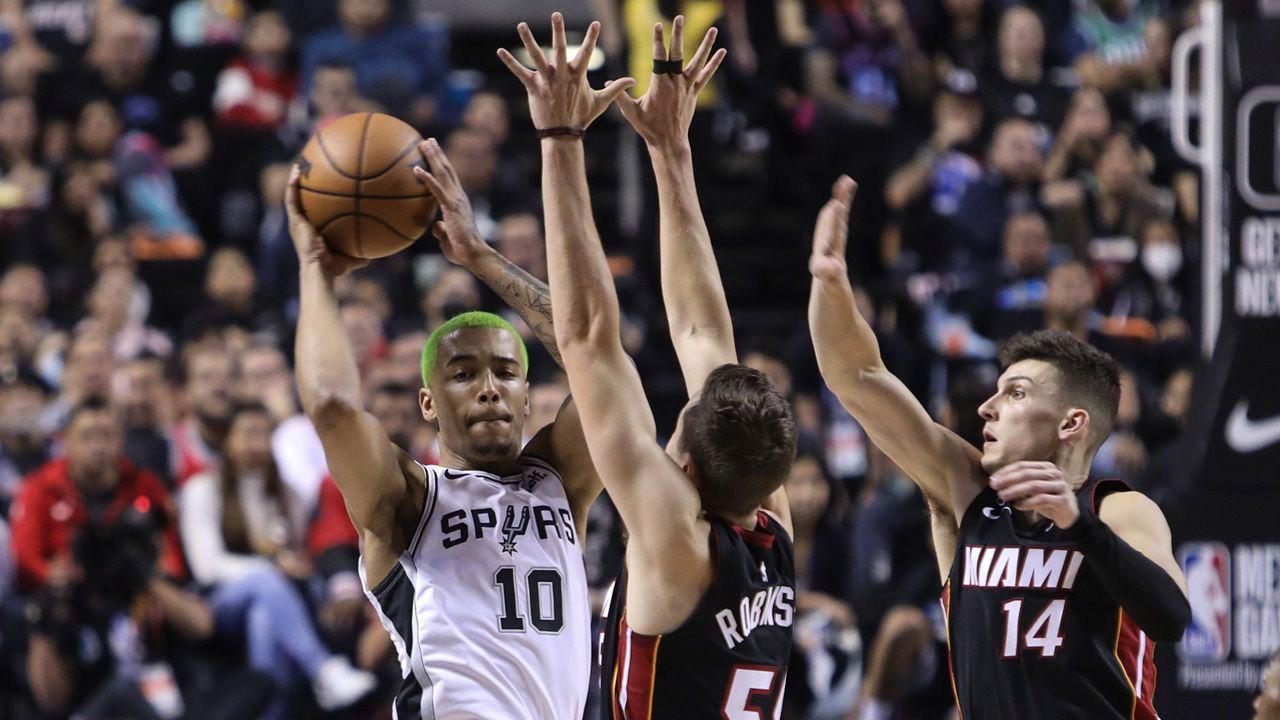 The game was in Mexico City; that made it a unique experience. The Miami Heat were without two starters; there was nothing forgeign about that amid this injury-ravaged season.

Through it all, a game that required an altitude adjustment and attitude adjustment while playing in the injury absences of Kyle Lowry and Caleb Martin ended as each of the previous three on the four-game trip completed Saturday.

Short on bodies, the Heat turned to the biggest three of those who remained available, with Jimmy Butler scoring 26, Tyler Herro 21 and Bam Adebayo adding a 22-point, 13-rebound double-double.

Factor in five steals off the bench from Victor Oladipo, and the Heat avenged last Saturday’s home loss to the Spurs,

A Duncan Robinson four-point play as part of an 8-0 run put the Heat up 90-86 early in the fourth. Another Robinson 3-pointer then pushed the Heat lead to 95-88.

The Heat pushed their lead from there to 13 with 3:55 to play, holding on from there.

The Heat outscored the Spurs 31-17 in the fourth quarter.

2. Short again: For the second time in as many games, the Heat were without two starters, with Lowry sitting out with knee pain, Martin with an ankle sprain.

Lowry also sat out Thursday night’s victory over the Houston Rockets, as did Adebayo, who returned after dealing with a sprained left ankle.

The Heat had only 10 players available, with Lowry, Martin, Gabe Vincent, Omer Yurtseven, Udonis Haslem and Jamal Cain out.

That number dropped to nine when backup center Dewayne Dedmon was lost for the night in the second quarter with an ankle sprain.

3. Stepping back: After scoring 35 points Wednesday night in Oklahoma City and a career-high 41 Thursday in Houston, Herro took somewhat of a step back, forced to play more as a playmaker with Lowry and Vincent out.

Herro’s second 3-pointer moved him past Voshon Lenard for eighth on the Heat all-time list.

“It just depends on what’s called for, what the scheme is, how teams are approaching him,” Spoelstra said. “I assume we’ll see more aggressive defensive schemes.”

4. Butler gets going: Having largely reserved his volume scoring recently for late-game situations, Butler this time was up to 21 points by the end of the third quarter.

5. Road less traveled: For the Heat it was just a brief taste of Mexico, arriving overnight Thursday and out immediately after Saturday’s game.

“I wish we had an extra day to do a little bit more sightseeing. We were able to do that five years ago,” Spoelstra said of Heat’s lone previous trip to Mexico City.

Butler said it was a moment to be embraced.

“I think it’s a blessing to be able to play some basketball in this beautiful country,” he said.

NBA Commissioner Adam Silver was in attendance, with Alonzo Mourning representing the Heat.

The game was delayed 15 minutes before the start of the second half due to lighting issues.