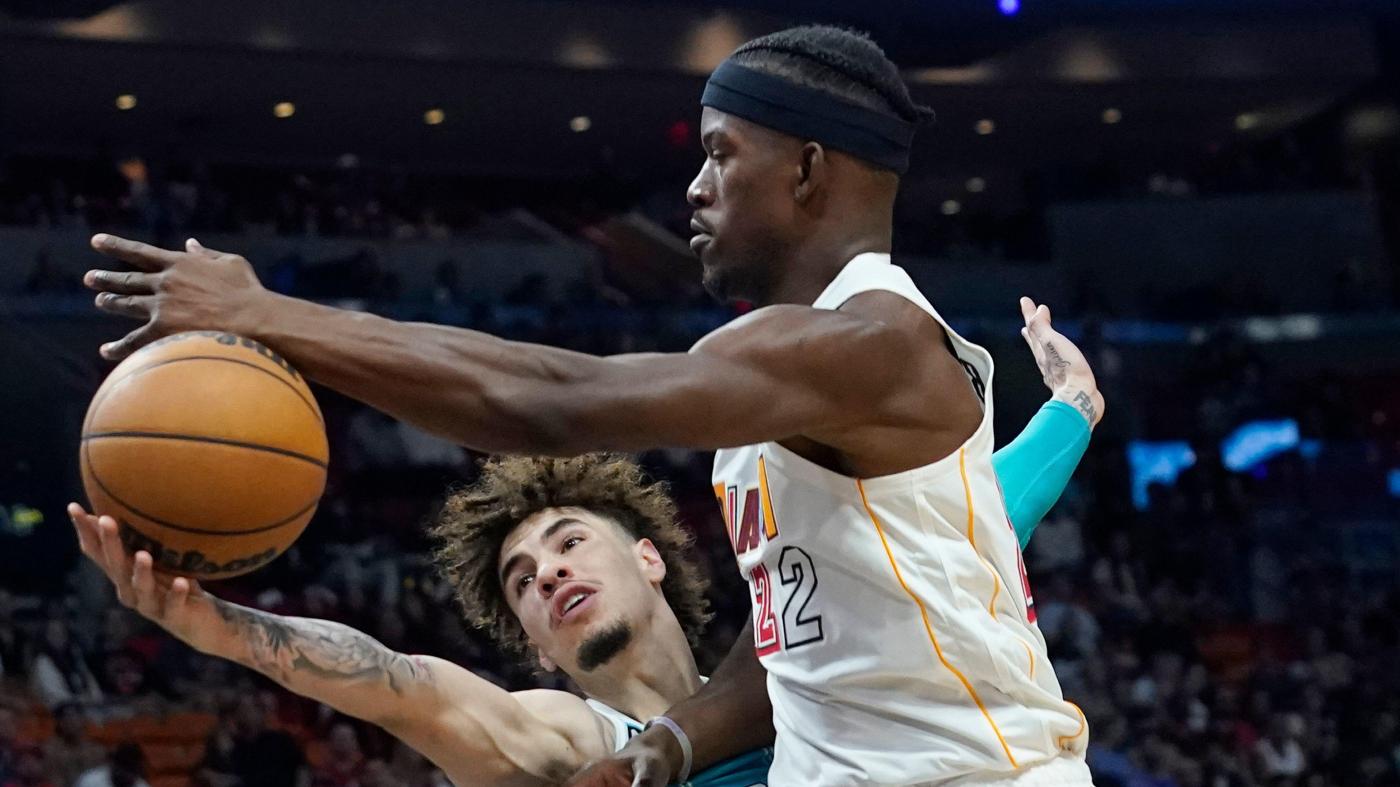 This was the reminder that Miami Heat games can be more than hair-raising thrill rides decided in the final nerve-racking seconds.

Saturday night’s 132-115 victory over the visiting Charlotte Hornets actually was – dare we say it? – fun.

While the record remains south of .500, at 6-7, Saturday night offered 25 Heat points in the first five minutes of the third quarter, an 11-of-11 shooting start to the second half and enough of a cushion that Kyle Lowry didn’t have to push to the finish for a triple-double.

But that also also wasn’t the lone cushion on a night of frivolity against the worst team in the Eastern Conference.

There also was the pink cushion at the feet of DJ Khaled as he sat next to the Heat bench on the north sideline, showing off his new signature Jordan Brand sneakers.

And the celebration began even before the final buzzer, with the Heat honoring point guard Timn Hardaway at halftime for his September Basketball Hall of Fame induction with a warm and passionate ceremony.

Heck even Jamal Cain got to make his NBA debut, and score his first NBA points. And Nikola Jovic played.

As for the game, the Heat made their statement when they emerged from the intermission to outscored the Hornets 45-25 in the third quarter.

Guard Max Strus led the Heat with 31 points, shooting 8 of 14 on 3-pointers. Center Bam Adebayo provided the power play, with 24 points and 15 rebounds.

As for filling out the boxscore, Jimmy Butler closed with 20 points, eight assists and seven rebounds for the Heat, with Lowry with 12 points, 11 rebounds and eight assists.

Even then, there was a degree of trepidation for a team that had already blown a pair of 15-point leads earlier in the week, on Monday in a loss to the visiting Portland Trail Blazers, then doing the same Thursday against the visiting Hornets before recovering for an overtime victory.

Charlotte, in fact, got the deficit down to 102-91 less than two minutes into the fourth quarter.

But this time, no need to play until the final ticks, as the Heat pushed the lead to 19 with 7:20 to play, cruising from there.

2. Fresh outlook: The Heat came out of the intermission percolating, hitting their first 11 shots, including 4 of 4 on 3-pointers. The streak did not end until Lowry was off on a 3-point attempt with 4:48 left in the third quarter.

The Hornets shot 1 of 8 on 3-pointers in the third.

3. Strus loose: For as much as 3-point shooting has been a struggle for the Heat, including their 6 of 21 in the first half, Strus helped make things right in the third, by converting all three of his 3-pointers in the period.

He kept going from there, with his seventh 3-point attempt moving him past Antoine Walker for 24th on the Heat all-time list.

4. Herro out again: Tyler Herro missed his third consecutive game with an ankle sprain suffered Nov. 9 against the Indiana Pacers.

“He’s done work at shootarounds and everything behind the scenes,” coach Erik Spoelstra said. “Sometimes those things just take a little bit more time than what you want it to. And that’s where we are right now. But he’s doing everything he needs to do to give himself a chance.”

Strus again started in place of Herro, making it Strus’ sixth start in the Heat’s 13 games, at a time he was expected to shift into the sixth-man role Herro held last season.

5. Still FTX: While the goal remains to scrub the name of the arena’s former naming-rights holder, there still was ample FTX presence, including the logo of the failed cryptocurrency exchange prominently displayed on each side of the court.

While not a formal policy, the team has taken to calling the facility “The Heat’s House” when identification is necessary.