Todays Though > News > Heat go from cruise to chaos, hold on for 112-109 victory over Raptors for season’s first win – Boston Herald
News

Heat go from cruise to chaos, hold on for 112-109 victory over Raptors for season’s first win – Boston Herald 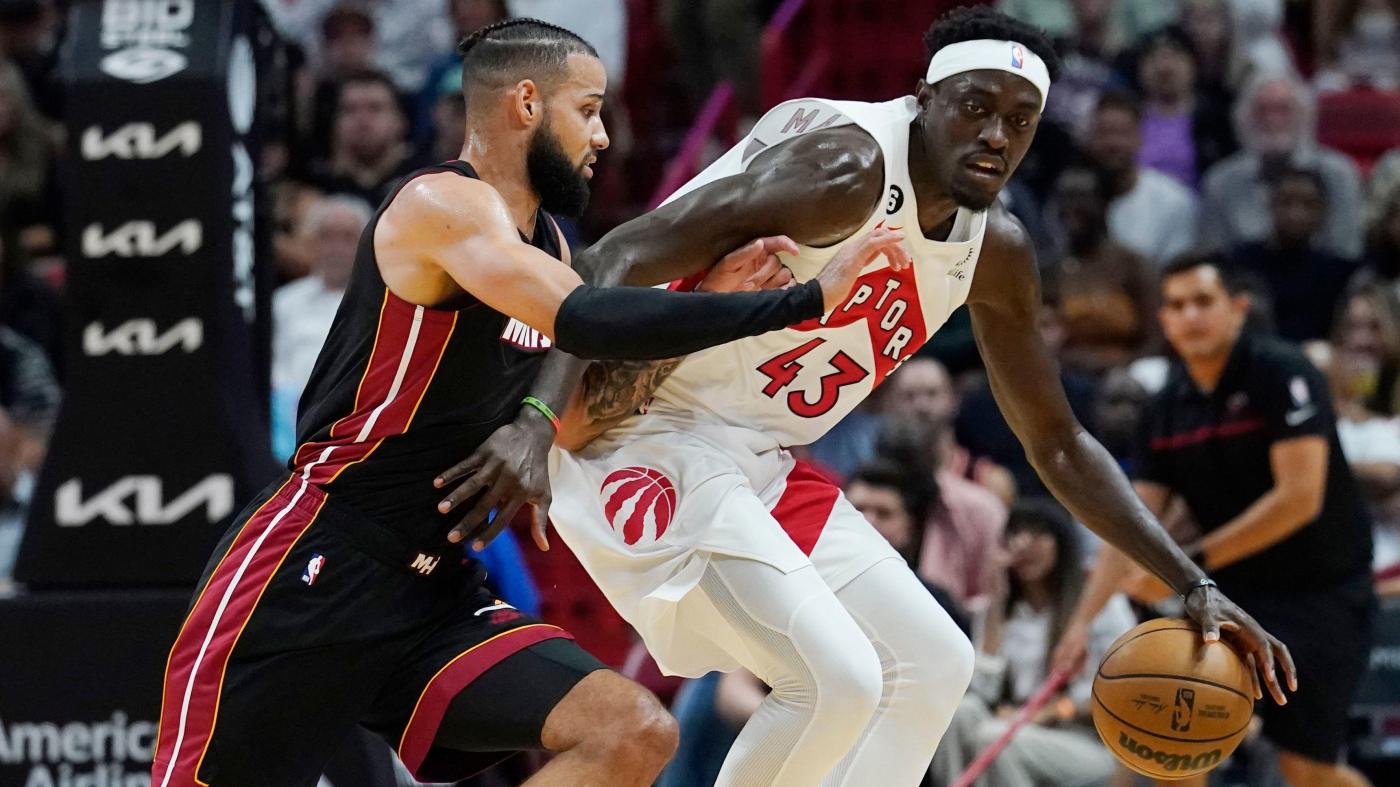 No, not a must-win game. Not three games in.

It just felt that way Saturday night for the Miami Heat.

After dropping the first two games of their season-opening four-game homestand the Heat regained their offensive rhythm and were able to shake off a shaky finish to hold off the Toronto Raptors 112-109 at FTX Arena.

Now all the Heat need to do before heading out for a three-game western swing is to do it again, with the teams also meeting Monday night at FTX Arena.

It is a rematch that figures to feature added spice after Heat forward Caleb Martin and Raptors center Christian Koloko were ejected in the third quarter after a shoving match sent both into the stands.

It was balance in terms of inside play and 3-pointers.

Balance in terms of standing up to the length of the Raptors.

Balance in terms of the even keel needed after a blowout turned competitive.

And balance in the scoring column, with Jimmy Butler with 24 points, Max Strus 20, Kyle Lowry 17 and Tyler Herro 14.

And then the Raptors came roaring back, fueled seemingly by the Martin-Koloko fracas, with a 19-2 run that drew them with seven, before the Heat went into the fourth up 92-83.

But with 64 seconds left, after Herro was tied up for a jump ball off a Heat inbounds attempt, Pascal Siakam converted a layup to draw Toronto within 109-103.

That sent Butler to the line with 10.2 seconds left and both teams out of timeouts, converting only the first, for a 112-108 lead. Butler then fouled former Heat center Precious Achiuwa, who missed the first free throw to effectively end it.

2. Hostile act: A lopsided game took a heated turn with 7:46 left in the third quarter, when, with the Heat up 81-59, Martin and Koloko tangled on a rebound battle, with Martin’s lunge sending both into the front row.

Martin was called for a loose-ball foul, with the two each called for a technical foul and ejected. Strus then entered for Martin.

Martin, who started for the third consecutive game at power forward, closed with eight points and five rebounds in his 22 minutes, with possible league scrutiny to follow.

3. Strus boost: For the second time in three games, Strus provided a significant boost in his new bench role, this time with five points early in the fourth quarter after the Raptors inched closer.

4. Range finder: After shooting 5 of 20 in the first two games, Lowry opened 3 of 3 on 3-pointers, with one of the conversions turning into a four-point play.

Lowry briefly had to leave in the first two minutes to treat a facial laceration, with Gabe Vincent stepping in in the interim to convert a 3-point and then assist on a Herro 3-pointer.

Lowry was back to his typical feisty self, receiving a technical foul after he was called for a take foul in the third quarter, it was the first time the Heat have been cited for the NBA’s new rule on intentional fouls designed to stop play.

5. Do it again: The Heat figure to get a motivated Fred VanVleet in Monday’s rematch, but now there is uncertainty whether they again will see Scottie Barnes, the University School and Florida State product who was last season’s Rookie of the Year.

Barnes sprained his right ankle on a dramatic second-quarter dunk over Herro and was unable to make it out for the second half, with X-rays negative.

Koloko, the second-round pick out of Arizona, started the second half in place of Barnes.

VanVleet was called for his fourth foul with 66 seconds left in the second quarter and his fifth 20 second into the third. His first points came on the free throws for Lowry’s take foul and technical foul with 7:55 left in the third.