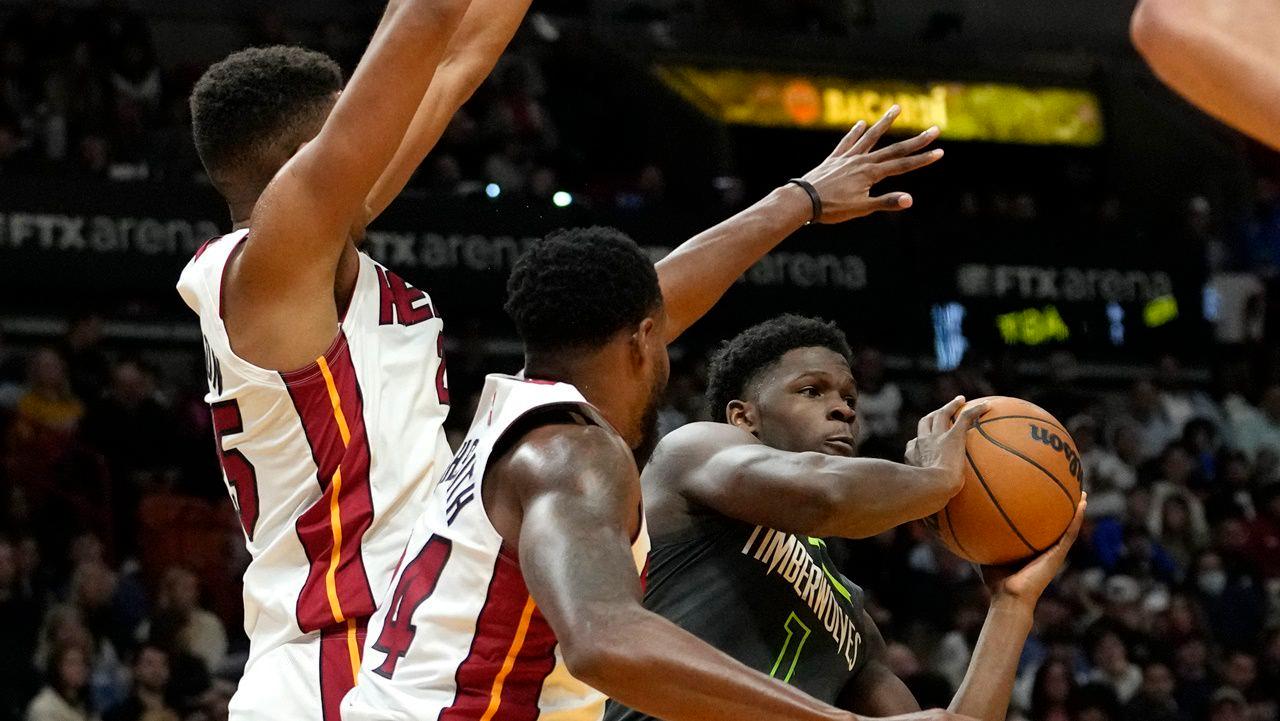 The lineup again was in flux.

But there also remained the constant of fights to the finish.

With Jimmy Butler and Bam Adebayo sidelined, the Miami Heat had to conjure a different formula in Monday night’s 113-110 victory over the visiting Minnesota Timberwolves.

So with Dewayne Dedmon also ailing and sidelined, the rotation at center was reduced to Nikola Jovic and Orlando Robinson.

And with Butler unable to go, Max Strus was elevated to go-to scorer.

No, not exactly what you’re looking for after an 0-2 start to a four-game homestand, with one more home game to follow before a challenging five-game western swing,

But with Adebayo ill and Butler unable to go due to an ankle sprain, desperation turned to inspiration for Erik Spoelstra’s team.

And so, back to .500 at 17-17, doing it the hard way, including a key late jumper from Tyler Herro on a night when precious few of his outside shots were falling.

Strus led the Heat with 19 points, with Kyle Lowry adding 18. Combined with several other complementary contributions, it was enough to overcome the 29 points from Anthony Edwards, in a game the Timberwolves were lacking ailing big man Karl-Anthony Towns.

The Timberwolves would then pull within two, before the Heat upped their lead to 109-101 with 5:22 to play.

But with the shot clock expiring, Herro stepped up with a corner jumper with 33.2 seconds left for a 113-108 Heat lead. Initially ruled a 3-pointer, it was changed to a two-point basket (Herro closed 0 for 8 on 3-pointers).

Later, it came down to a moment of truth with 28.8 seconds left on a block-charge play, with Spoelstra challenging a blocking call against Lowry. The ruling went against the Heat, with Edwards’ basket drawing the Timberwolves within 113-110.

A miss by the Heat’s Caleb Martin followed, setting up the Timberwolves down three with 2.5 seconds to play, with the game ending on a Minnesota turnover, their 22nd of the night.

2. Doing his part: With Butler and Adebayo out, Lowry stepped up his game, up to 18 points and nine assists by the end of the third period, keeping the Heat afloat when needed most.

Lowry accounted for nearly two-third of the Heat’s 34 third-period points, with seven points of his own and five assists that led to 13 Heat points.

He closed 8 of 16 from the field, playing his 34 minutes without a turnover.

3. By committee: With Adebayo, Dedmon and Omer Yurtseven out, and with Udonis Haslem dealing with Achilles soreness, it came down at center to the Heat tandem of 19-year-old Jovic and two-way contract player Orlando Robinson

Jokic and Robinson both dealt with early foul trouble, with Robinson, who was up to 10 points and six rebounds by that stage.

The Heat went to extensive zone early due to that foul trouble, with Jovic also picking up his third foul midway through the second period, necessitating time at center for Haywood Highsmith.

“They’re two different types of players and depending on the matchup, O can give us a little bit of more traditional center play,” Spoelstra said. “And Niko, we’re just continuing to develop him and learn what he’s capable of. His skill set is really unique and I think it’s really promising.”

4. A 3 with meaning: Amid the Heat’s 3-of-19 start on 3-pointers, Heat guard Duncan Robinson enjoyed a double-milestone moment.

In addition, those three points lifted him to 3,000 for his career.

Robinson’s second basket, another 3-pointer, was the 1,000th of his career.

Robinson had been held out of Friday’s loss to the Pacers.

“He understands his role now,” Spoelstra said. “I think he’s in a good place.”

Robinson closed 3 of 5 on 3-pointers.

5. As needed: Again injected into the starting lineup out of necessity, with Butler out, Strus stepped up with his 3-point stroke when needed.

He beat the buzzer to end the first half with a 3-pointer and then moved to 5 of 9 from beyond the arc midway through the third quarter at a stage when the rest of his teammates were 5 of 27.

It was Strus’ 19th start in his 32 appearances, after having been projected as a sixth man in the preseason.