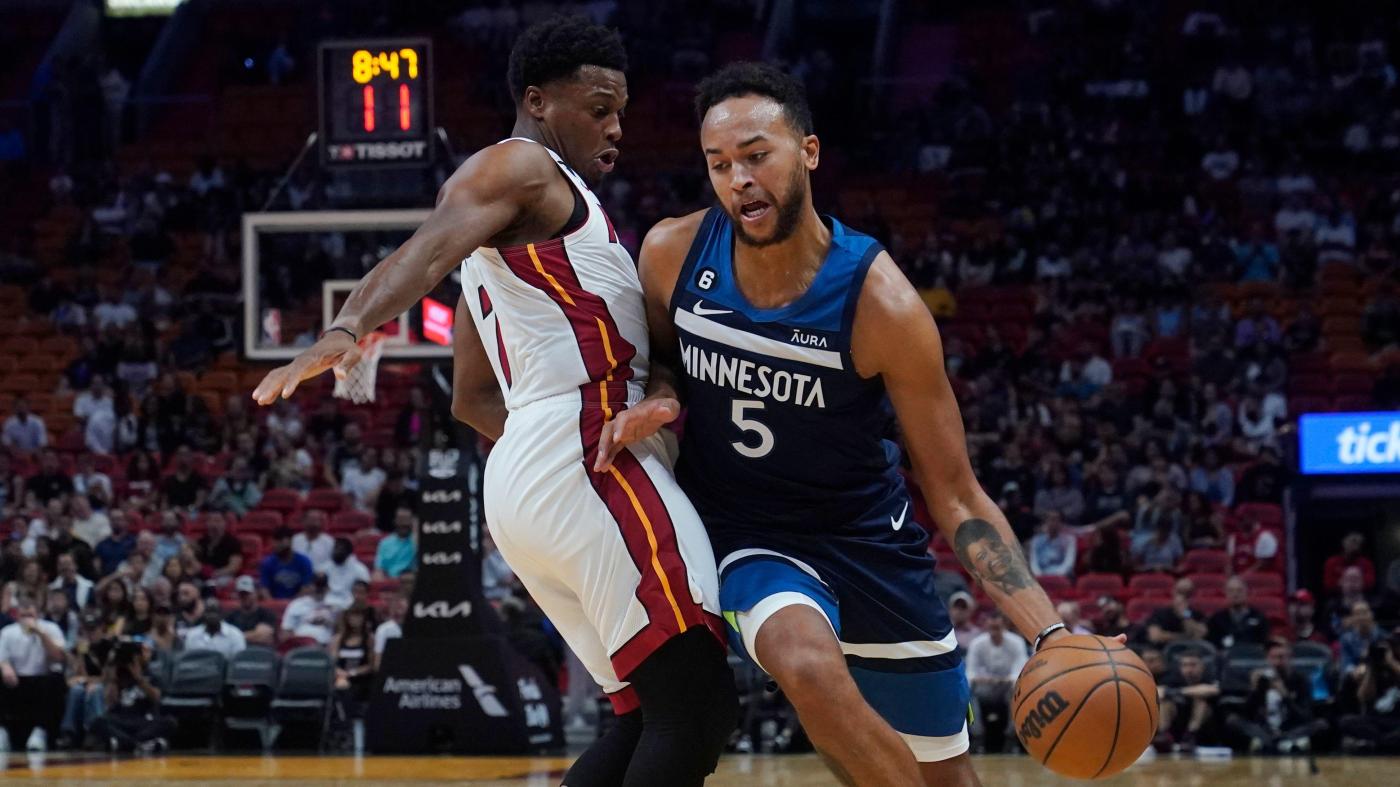 Chalk this one up to what could preface any recap of an NBA preseason game, “Indicative of nothing, . . . “

Because without Jimmy Butler and Victor Oladipo, and with only a nominal amount of Kyle Lowry, it’s not as if there was going to be much in the way of cohesion for the Miami Heat in Tuesday night’s 121-111 exhibition loss to the Minnesota Timberwolves at FTX Arena.

So, instead, greater focus was on the lineups and rotations coach Erik Spoelstra rolled out, with four more exhibitions to follow before the Oct. 19 season opener against the Chicago Bulls.

Less than a week removed from training camp in the Bahamas, the Heat for part of the night had the look of a team with a Caribbean hangover.

There were, however, some redeeming Heat performances, including 22 points, six rebounds and four assists from Tyler Herro and 22 points and six rebounds from Bam Adebayo, with neither hitting the 30-minute mark.

Five Degrees of Heat from Tuesday’s exhibition against the Timberwolves:

1. Something big: With Butler given the night off for rest, Spoelstra opened with dual big men, with Omer Yurtseven starting alongside Adebayo.

Caleb Martin, who has been projected as the possible starting power forward, instead opened at small forward. Lowry and Herro started at guard.

It wasn’t exactly the ultimate big-man challenge, with the Timberwolves giving both Rudy Gobert and Karl-Anthony Towns the night off.

Yurtseven was uneven on defense, including a pair of fouls in the opening 4:58, with the Heat’s spacing mostly cramped with Yurtseven and Adebayo on the court together.

Spoelstra then went smaller midway through the opening period, with Max Strus entering for Yurtseven, moving Martin to power forward.

The highlight of Yurtseven-Adebayo might have been a Yurtseven 3-pointer late in the second period off an Adebayo assist. Yurtseven closed with 11 points, nine rebounds, fouling out with 9:17 to play.

While there had been focus on increased 3-point attempts by Adebayo, he took only one among his 17 shots, a successful catch-and-shoot basket late in the third period.

2. Herro’s night: After opening at shooting guard, Herro moved to point guard at the start of the second half, with Lowry’s night ending after 16:18 of action, with four points, three rebounds and one assist.

There was a brief scare with 8:11 left in the third quarter, when Herro went down after knee-to-knee contact with the Timberwolves’ Jaden McDaniels.

But after a timeout, Herro, who had limped to the bench, remained in the game, with McDaniels subbed out.

3. Next up: The Heat eventually moved late in the first quarter to a second unit of Dewayne Dedmon at center, Haywood Highsmith at power forward, Strus at small forward, Duncan Robinson at shooting guard and Marcus Garrett at point guard.

That alignment came with Butler, Oladipo and Gabe Vincent not available. It left first-round pick Nikola Jovic out of the initial 10-man mix, not entering until the waning minutes, as the Heat’s eighth reserve.

All the while, Butler watched from the bench wearing a cap, with his training-camp braid extensions gone . . . for now.

4. Early warning: The Heat bench was given a sideline warning by referee Scott Foster — part of a new rule — 55 seconds into the game for standing during the course of play.

Under the stronger interpretation of bench decorum, the second warning is a technical foul, as is each additional warning.

5. Waiting game: Despite Spoelstra stressing Oladipo being back up to speed after years of knee and quadriceps issues, the 30-year-old guard was held out Tuesday after also being one of only three players (Vincent and Udonis Haslem the others) not to see action in Monday’s intrasquad scrimmage.

“He had a great camp and the workload was pretty significant,” Spoelstra said. “So he’s been doing work the last two days behind the scenes. But we want to rest him a couple of days before he gets out there and competes.”