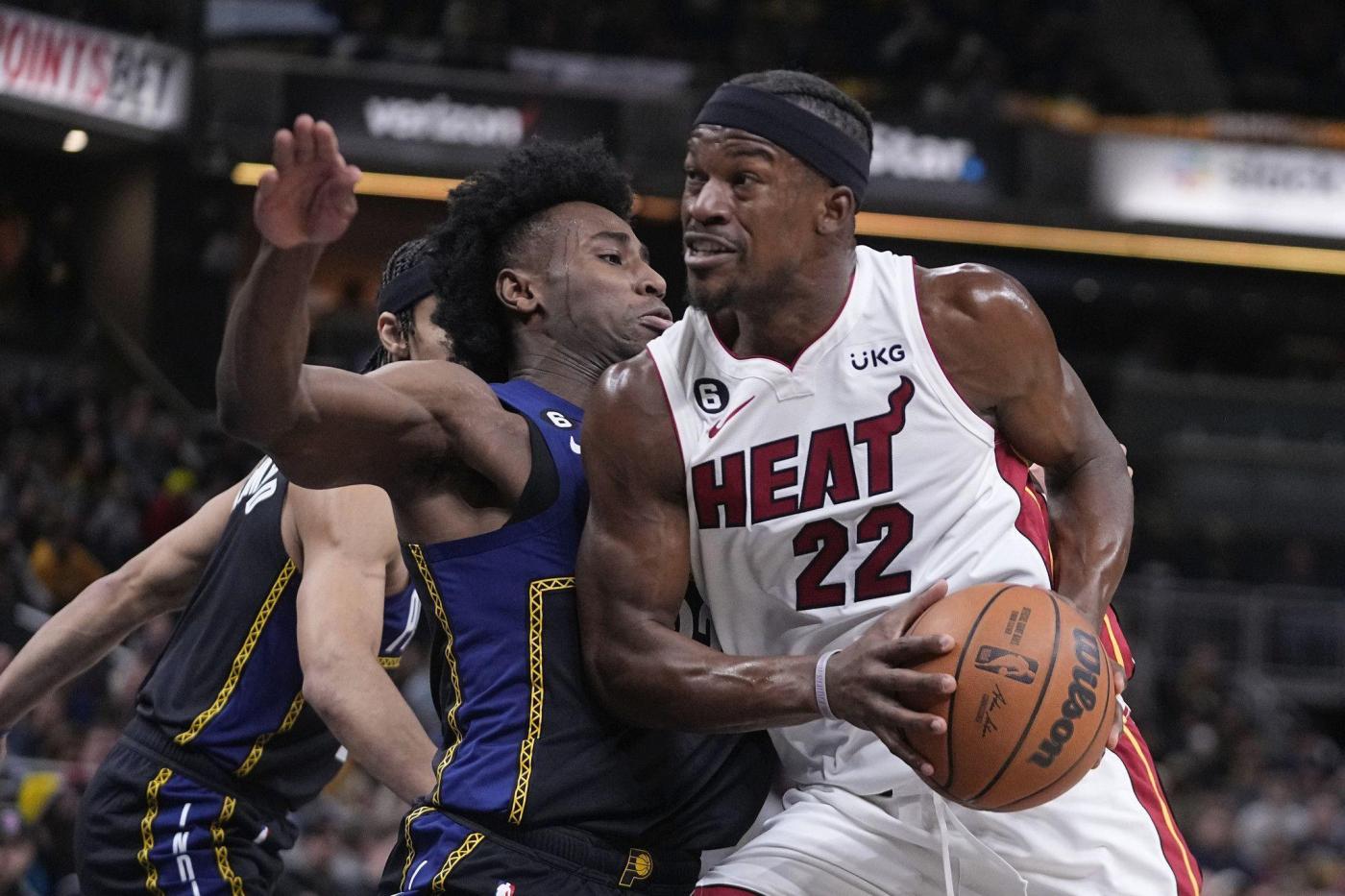 The Heat are still trying to get healthy.

Miami has been racked by various injuries and ailments all season, and they are hoping two key players, Jimmy Butler and Bam Adebayo, can return to the court against the Los Angeles Lakers on Wednesday.

The latest case of injury woes for the team: Adebayo, who missed Monday night’s game against Minnesota with a non-COVID illness, is questionable with a sprained right shoulder. Butler is also questionable with an ankle sprain he suffered in a loss to Indiana on Friday.

Additionally, center Dewayne Dedmon is out with plantar fasciitis in his left foot for a third consecutive game, potentially leaving the Heat short-handed at the position.

“That’s the deal,” Spoelstra said. “Some years, you have more of this than other years. For the most part, last year — other than that stretch in January — we were healthy. We were one of the more healthy teams over the course of the regular season. Two years ago, we weren’t. This year, we haven’t so far. It could change. It might not change. You just have to deal with whatever is thrown your way and you have to consistently make progress.”

Heat veteran Udonis Haslem, who is in his 20th season with Miami, said the team has had worse injury luck than in a usual NBA season.

“It’s definitely more than normal,” Haslem said. “But you can’t really worry about those things in an NBA season. You would hope to go through with no injuries, nobody gets hurt, but that’s just not realistic.”

Both Haslem and Spoelstra said the Heat have not used the injury bug as an excuse for the team’s performance this season.

“It’s been extremely hard for us, but we’re not the type of team to make excuses,” Haslem said. “We have a system, we have a culture, we preach next man up. And the guys that have been coming in have been doing a great job at just filling the gaps and doing the best they can.”

However, the Heat have struggled to keep a consistent lineup on the court. They have had their preferred starting lineup available for just 12 of 34 games. Only four players (Adebayo, Kyle Lowry, Caleb Martin and Max Strus) have played 30 or more games so far this season.

With the Heat sitting at .500 and tied for eighth place in the Eastern Conference with a little more than half of the season to play, Spoelstra said it takes “constant communication” with the training staff and with players to know when to put banged-up contributors back onto the court.

“We don’t want to have guys take steps back,” Spoelstra said, “and you get a sense of urgency, like‚ ’Hey, we want to get everybody out there right now.’ We have to be responsible with these decisions and we’ve proven that we can get better and we can get closer to an identity that gives us a better chance to win every single night, regardless of who’s in, who’s out, as long as everybody’s present and everybody’s pouring into the team, even if you’re not playing.

“We’ve had some great instances this year with Gabe [Vincent], Kyle, Bam, with Jimmy, when they have not been playing where they have moved the needle to help us win with their communication or leadership or guidance during the course of the game or just infusing confidence in the group that’s out there.”

Haslem to have high-school number retired

Years before he joined the Heat, Haslem was making a name for himself in South Florida.

Haslem led Miami High to a pair of state titles before departing for college and eventually the NBA. On Tuesday, the Heat veteran will be honored by his alma mater and have his No. 50 high school jersey retired.

“It’s making a winning priority at all levels, it’s knowing how to sacrifice, knowing how to be a great teammate, knowing how to bring a group together,” Spoelstra said. “So many of those qualities, UD had and [they] were innate, and then the ones that he needed to learn from experience in this league, he gathered all those and made them tools.”

In addition to his high school honoring him this week, Haslem was inducted into the University of Florida Athletic Hall of Fame in 2012. He is due for a future ceremony at FTX Arena, as well: Heat president Pat Riley said in August that the team will eventually retire Haslem’s number, too.

“He means everything [to the local community],” Spoelstra said.

“Look, this guy is an absolute winner. There’s no coincidence about being a winner at every single level. Winning championships [at Miami High], going to Florida before they were really known as a power basketball program and taking them to the Final Four with a lot of other great players and a great coach in Billy [Donovan], and then winning, helping a franchise as much as he has here. That is an intangible that you would love to infuse in everybody, but it’s leadership at all levels.”