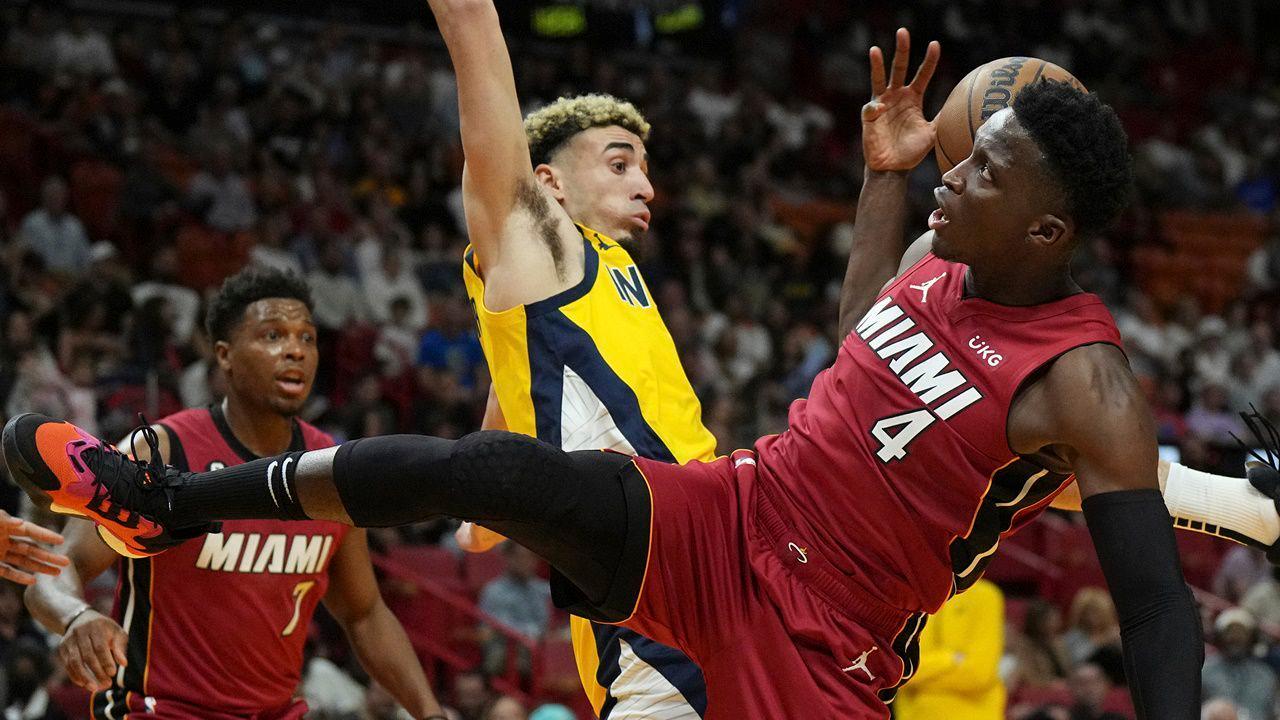 Observations and other notes of interest from Friday night’s 111-108 loss to the Indiana Pacers:

– Who can’t have nice things for Christmas?

– Who also can’t have a whole and healthy lineup for any type of enduring period.

– This time, it was as desired at the outset, with Bam Adebayo, Caleb Martin, Jimmy Butler, Kyle Lowry and Tyler Herro taking the court for the opening jump.

– For only the 12th time this season.

– And then Butler turned an ankle in the first half.

– And momentum was lost.

– When it appeared problem solved.

– As it was, Friday marked the sixth time in as many games that the Heat opened with a different lineup.

– So, for only the 12th time this season, the Heat rolled out their projected preseason preferred lineup.

– Coach Erik Spoelstra said prudence required the team to give Lowry the past week off.

– “He’s also been able to work, also, behind the scenes,” Spoelstra said. “I think that’ll be helpful.”

– With the start, Lowry moved past Mark Eaton, Terry Cummings and Rolando Blackman for 97th on the NBA all-time list, at 815, tying Stephon Marbury for 96th.

– With his first conversion, Lowry extended his streak of at least one 3-pointer to 28 games. His career best is 34 such games while with the Raptors.

– The game was the 200th regular-season appearance of Herro’s career.

– Herro’s third point moved him past Brian Grant for 19th on the Heat all-time scoring list.

– Herro’s third 3-pointer moved him past Dwyane Wade for seventh place on the Heat all-time list.

– Butler’s third free throw moved him past Otis Thorpe for 84th on the NBA all-time list.

– Butler’s third assist tied him with Eddie Jones for ninth on the Heat all-time list.

– The Heat, however, were not wholly whole, particularly in the middle, with Dewayne Dedmon sidelined by his ongoing foot soreness. That was with Omer Yurtseven long sidelined from November ankle surgery.

– But guard Gabe Vincent was back available, after missing the previous eight games with knee soreness.

– Spoelstra was the extended stretch of inactivity was required with Vincent.

– “Those are things that if you’re not moving well and you have some kind of ailment, it can get worse,” Spoelstra said. “And we all met about it. We wanted to take care of it right where it was. Thankfully, it didn’t need any kind of procedure, anything. It just needed rest and then a ramp up.”

– Spoelstra added, “And he’s passed every test to get to this point. And we just want to keep him feeling good. And we’ll see how he continues to respond. He’s had some really good work.”

– In addition to Dedmon and Yurtseven, rookie forward Jamal Cain was inactive, as a means of preserving the remaining games he can on the active list under the 50-game limit of his two-way contract.

– With Orlando Robinson playing as backup center in Dedmon’s absence.

– Haywood Highsmith then made it nine deep, ahead of Vincent and Duncan Robinson.