Heat’s Jimmy Butler shoots down notion of casting him at power forward (and he shows off new hairstyle); Herro downplay starting role, extension 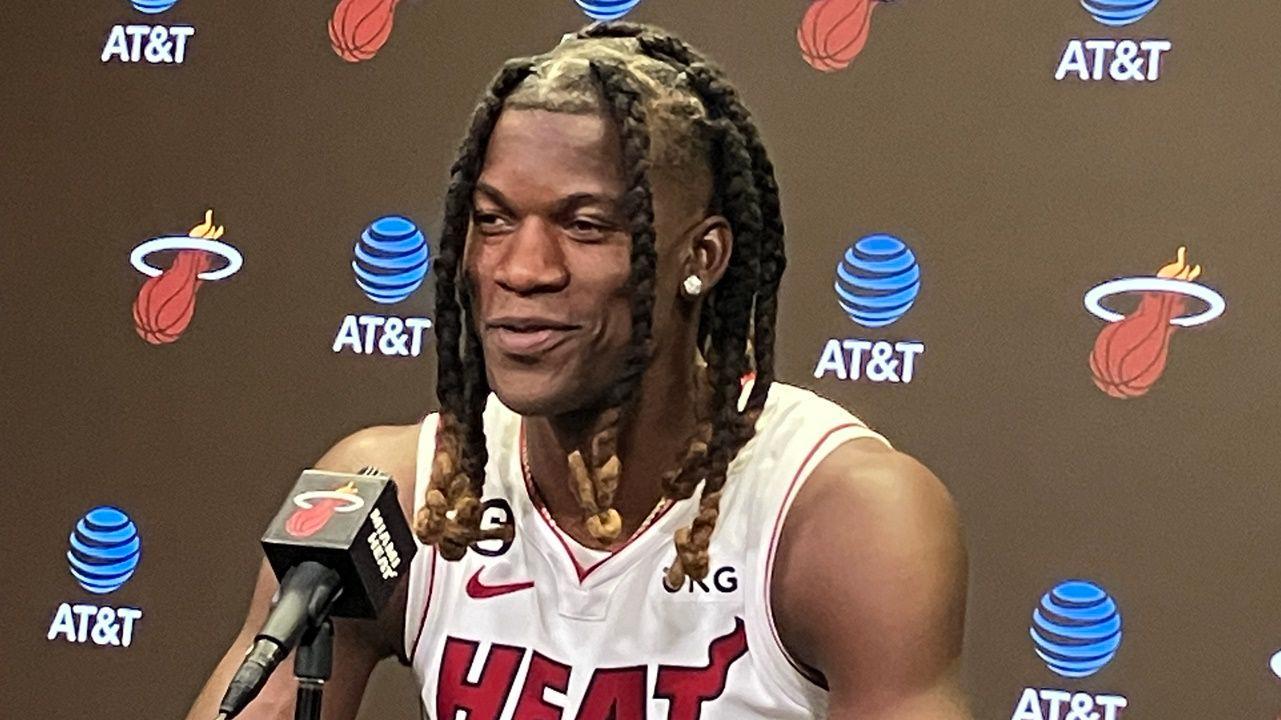 When it comes to Jimmy Butler potentially playing power forward this season, the Miami Heat’s leading man said Monday that his team had better start considering Plan B.

With power forward P.J. Tucker having left in free agency for the Philadelphia 76ers, and with the Heat not signing an outside replacement, Butler was asked at the team’s media day at FTX Arena if he would be willing to play this season in a power role.

“If they absolutely wanted to have a conversation,” Butler said of relenting to at least listen. “But I’m not going to play the four.”

The Heat’s other options at power forward include Caleb Martin, Haywood Highsmith, Max Strus, or one of the team’s center types, such as Dewayne Dedmon or Omer Yurtseven, albeit with coach Erik Spoelstra rarely favoring big lineups.

Of Tucker leaving, Butler said with a smile, “P.J.’s a traitor. I tell him every single day.”

Butler, 33, said the Heat would find a way to make it work without the veteran power forward.

Butler also downplayed offseason workout video showing him spending significant time working on his 3-point game. He stressed that his focus remains getting into the paint and getting to the foul line.

“Scout me however you want,” he said. “I’m still going to find a way to get into the paint.”

Of his offseason shift to a lengthier coif, Butler tried to insist that he hadn’t added extensions. But he also said he did not know if he would continue with the look during the regular season.

“I’m just messing with stuff to make the internet mad,” he said of the long braids he continued to sport Monday.

For his part, he said he plans to take a more proactive approach in the offense.

“Yeah,” he said with a wide smile. “We are a lot better when I’m scoring.”

Heat President Pat Riley spoke at the end of last season of Adebayo getting up at least 15 shots a game.

“You heard,” Adebayo added of Riley, “what the old man said about me.

“It is a big deal to me to come back better.”

The ongoing focus, though, he said, is to emerge with the NBA’s Defensive Player of the Year award.

“I mean, at this point, it’s politics,” he said of the annual media vote that went to Rudy Gobert and Marcus Smart the past two years.

Having said at the end of last season that he wanted to emerge as a starter, and with Riley saying shortly thereafter that such a role has to be earned, Tyler Herro somewhat softened the stance Monday.

“I’m a team player,” he said, “whatever Spo and organization wants me to do.”

Herro, appreciative of the importance of a well-rounded rotation, said he would accept, “whatever role fits me best.”

Eligible for an extension until the start of the regular season, Herro deferred such talk to his agent.

“I’m focused this season on basketball,” he said.

But confidence remains firmly in place.

“My offensive skill set is one of the best in the league,” he said.

With room, he said, for growth, “becoming more of a catch-and-shoot guy and attacking off the catch.”