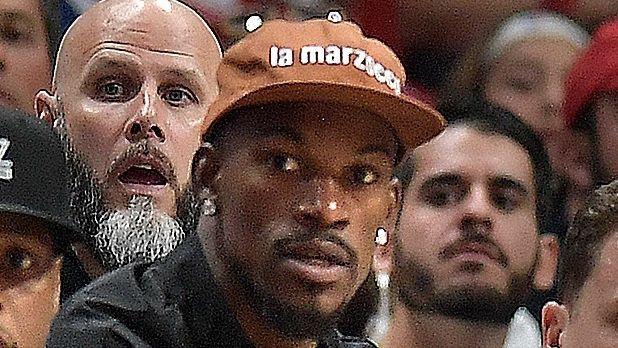 So apparently the reason Jimmy Butler did not look like himself in Wednesday night’s loss to the Toronto Raptors at the start of this four-game trip is that the Miami Heat’s All-Star forward wasn’t himself.

Coach Erik Spoelsrta confirmed that at Friday morning’s shootaround at Capital One Arena, when he said Butler would miss Friday night’s game against the Washington Wizards due to knee soreness.

It is the third game missed by Butler this season, having sat out a pair at the start of the month with hip soreness, a home victory over the Sacramento Kings and a road loss to the Indiana Pacers.

Butler matched his season low of eight shots in the loss in Toronto, when he finished with a season-low 13 points.

Spoelstra acknowledged Friday that it wasn’t Butler at his best on Wednesday night.

“It’s been bothering him for two or three games,” Spoelstra said, with Butler’s productivity having declined since a 35-point performance in last week’s home victory over the Charlotte Hornets. “So we’ll give him some rest right now and just treat him day to day. I don’t have a timeline on that.

“But he certainly needs a little bit more mobility than how he was moving the last two of three games.”

Butler had just one basket in the decisive fourth quarter in Toronto, but Spoelstra said there was no thought of pulling him from that game.

“You’re not telling Jimmy in the heat of competition,” Spoelstra said. “He’s going for the win, and we had those opportunities at the end. And he was loose at that point.”

Butler’s absence comes with guard Tyler Herro back in South Florida with a sprained left ankle, missing his sixth consecutive game, and with center Bam Adebayo sidelined by a bruised left knee.

While the Heat struggled in their power rotation in Toronto, Spoelstra would not go as far Friday as calling Adebayo his most irreplaceable player.

“I don’t know,” he said. “Great players are always very irreplaceable on any team. Bam is a great player. He’s a great winner. He impacts that line of winning and he does it on both ends. So of course there’s going to be an impact for us.

“Right now, we’re not trying to wrap our mind around winning 20 games without him. We have enough to be able to win one game. And that’s all we’re focused on right now, and then we can move on from there.”

Also on the Heat’s injury report Friday were center Dewayne Dedmon, due to foot plantar fasciitis, and forward Caleb Martin, due to right knee tendinosis, with both having pushed through their ailments.

“I just love the spirit and competitiveness of our guys,” Spoelstra said. “Whatever they have, they’re giving to the team. Dewayne has been very effective in his minutes the last few games and that’s really helped our second unit. Regardless of how he feels, his size, his activity, his voice, his toughness, those are good things for our basketball team.”

The Heat remain without guard Victor Oladipo, who is on the trip receiving treatment for knee soreness, yet to play this season, and center Omer Yurtseven, who underwent Tuesday ankle surgery. Also, captain Udonis Haslem remains away for personal reasons.

Spoelstra downplayed older players having to deal with injuries so early in the season, including Butler, 33.

“I think we have a young team,” he said. “We’ll play our depth as necessary and these guys have put in a bunch of time. They’re ready for their minutes and we’re going to need some X factors, so I’m looking forward to seeing that.”