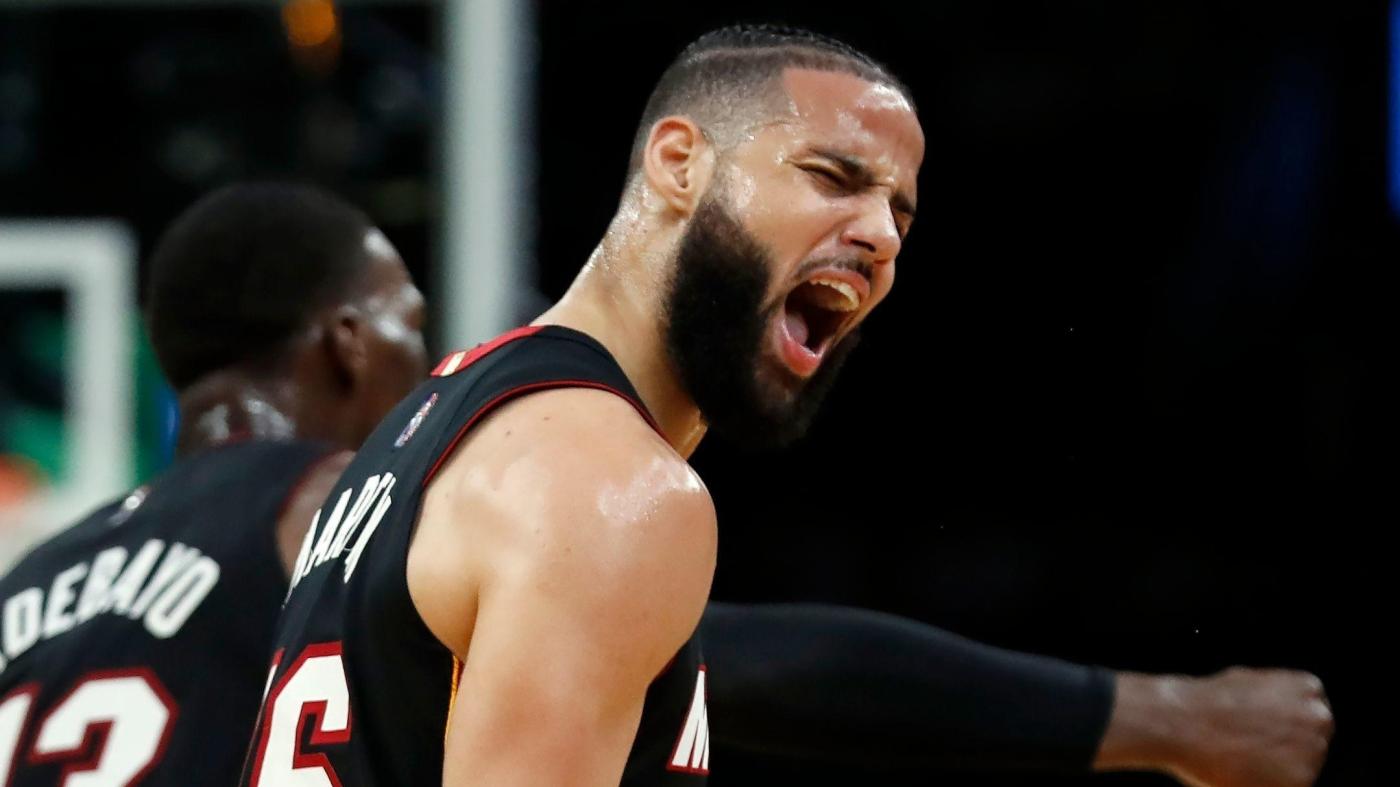 It was a moment that left Caleb Martin at a loss. It also left the Miami Heat power forward wondering how much of a loss.

Stepping into the role of starting power forward this season, Martin found himself caught up in the intensity of Heat-Toronto Raptors in Saturday night’s 112-109 victory at FTX Arena, particularly with 7:46 to play in the third quarter.

That’s when, on a rebound scramble, what Martin perceived as a push from Raptors rookie center Christian Koloko turned into a shove by Martin that sent Koloko into the first row.

While players on both teams rushed to the scene, no punches were thrown, Martin was assessed a loose-ball foul, with both Martin and Koloko receiving technical fouls and ejections.

League review followed, with Martin on Sunday night suspended for the teams’ Monday night rematch at FTX Arena and Koloko fined $15,000. In addition, Heat rookie forward Nikola Jovic also was suspended for Monday’s game for leaving the immediate bench area during the altercation.

Per the NBA official release: “Miami Heat forward Caleb Martin has been suspended one game without pay for instigating an on-court altercation by taunting Toronto Raptors center Christian Koloko and then tackling him into the spectator stands, and Koloko has been fined $15,000 for grabbing Martin during the altercation, it was announced today by Joe Dumars, executive vice president, head of basketball operations.

“Heat forward Nikola Jovic has also been suspended one game without pay for leaving the bench area and entering the altercation. The incident, for which Martin and Koloko were each assessed one technical foul and ejected, began when the players became entangled while battling for rebounding position.”

Martin said it was a brewing situation that boiled over.

“I just think that there was a lot of plays like kind of leading up to it, it was a chippy game,” Martin said after his second career ejection. “That’s just typically how it goes with Toronto, it’s chippy back and forth.

“Ultimately, like, you know what I mean, I just think emotions were high, the game was a close game, it was back and forth, and overall I got to be more professional in the way I handle those type of situations.”

Koloko, the native of Cameroon who was selected No. 33 out of Arizona in June’s NBA draft, had started the second half after the Raptors lost Scottie Barnes, last season’s NBA Rookie of the Year, in the first half with a sprained right ankle. Barnes is listed as questionable for Monday.

As for Koloko, the lanky 7-foot center said after the game he wasn’t sure what happened, at a loss to why he, too, was ejected.

“I feel like everybody saw what happened,” he said. “I got fouled and I fell and I don’t know what he was trying to do. I just stood up for myself, and I get ejected. So that’s what happened.”

Koloko said he never expected on such an innocuous play to wind up prone in the stands.

“I was as confused as you,” he said during his postgame media session. “I had no idea. He just stood there looking at me like crazy. I just stood up. I don’t know.”

The eyes, Koloko said, had it.

“He was looking at me aggressively,” he said. “So I just stood up for myself. I don’t know.”

Koloko said the anger was excessive for the moment.

Martin said he had no history with Koloko, asking after the game about Koloko’s background.

Even though he wound up prone on the play, Koloko tried to take the high road afterward.

Like Martin, Koloko spent the remainder of the game in the locker room, as the Heat allowed almost all of a 24-point third-quarter lead to evaporate before holding on for their first victory after a pair of season-opening home losses.

“I was watching the game in here and they tried to win the game even though we were playing pretty bad,” Kolloko said. “And we came back in the second half and almost got the win.”

With his tenure with the team dating to a more violent era of such scrums in the playoffs against the New York Knicks in the late ‘90s, Heat coach Erik Spoelstra downplayed the magnitude of the moment.

“It got pretty intense under the backboard,” he said. “I wish it didn’t come to that, but we were able to respond and have a lot of contributions in that fourth quarter.”

Max Strus entered in place of Martin, scoring seven of his 20 points in the decisive fourth quarter.

“I don’t want to make light of it; it’s different than the ‘90s, though. Of course, that’s where I immediately go,” Spoelstra said of making sure his bench players remained by the bench. “I’m thinking about getting everybody off that baseline. I thought [assistant coach] Malik [Allen] did a great job of keeping everybody by the bench.

“It’s just one of those emotional things that happen. And thankfully it didn’t escalate. I don’t think it affected necessarily the tenor or emotions after that. It was an isolated incident between two players. Again, like I said, I wish it didn’t happen like that with Caleb. But it did.”

The Heat posted the same injury report for the fourth time in as many games this season, with Victor Oladipo listed as out for Monday due to left-knee tendinosis and Omer Yurtseven out due to a left-ankle impingement.