Todays Though > News > Heavy Russian barrage on Ukraine, no water for most of Kyiv
News

Heavy Russian barrage on Ukraine, no water for most of Kyiv 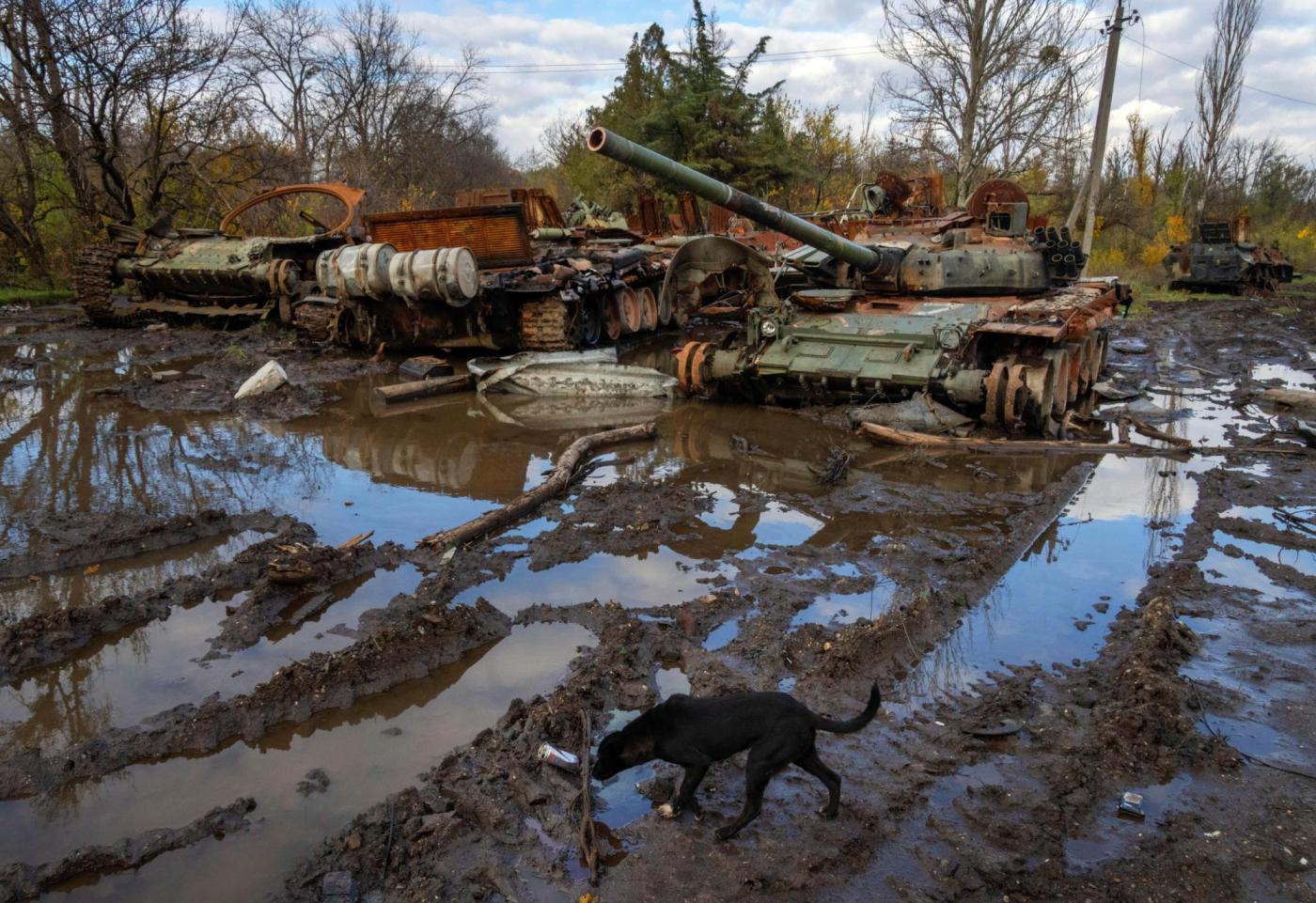 KYIV, Ukraine (AP) — A massive barrage of Russian cruise missile and drone strikes hit critical infrastructure in Kyiv, Kharkiv and other Ukrainian cities early Monday, knocking out water and power supplies in apparent retaliation for what Moscow alleged was a Ukrainian attack on its Black Sea Fleet.

Russia has intensified its attacks on Ukraine’s power plants and other key infrastructure as the war enters its ninth month. Large parts of Ukraine are already experiencing rolling power cuts as a result.

“The Kremlin is taking revenge for military failures on peaceful people who are left without electricity and heat before the winter,” Kyiv region Gov. Oleksii Kuleba said.

Russia’s Defense Ministry said its forces carried out “strikes with long-range, high-precision air- and sea-based weapons against the military command and energy systems of Ukraine.”

“The goals of the strikes were achieved. All designated targets were hit,” the ministry said in a statement.

Meanwhile, 12 ships with grain left Ukrainian ports on Monday despite a Russian threat to reimpose a blockade that threatened hunger across the world, Ukraine’s Ministry of Infrastructure said. One vessel carried Ukrainian wheat to Ethiopia, where a severe drought is affecting millions of people.

Ukraine’s air force said it shot down 44 of more than 50 cruise missiles that Russia launched.

Hundreds of localities in seven Ukrainian regions were left without power, he said in a Facebook post, adding that “the consequences could have been much worse” if the Ukrainian forces hadn’t shot down most of the Russian missiles.

Thirteen people were wounded as a result of the morning attacks, the head of National Police, Ihor Klymenko, said on national television.

Loud explosions were heard across the Ukrainian capital as residents prepared to go to work. The emergency services sent out text message warning about the threat of a missile attack, and air raid sirens wailed for three hours during the morning commute.

Kyiv Mayor Vitali Klitschko said 80% of consumers in the city of 3 million were left without water because of damage to a power facility. By Monday evening, workers had reduced the percentage to 40% and the number of apartments without electricity from 350,000 to 270,000. To cut power consumption, Kyiv authorities extended intervals between subway trains and replaced electric trolleybuses and trams with buses, Klitschko said. Subway service resumed Monday night.

Across Kyiv, hundreds lined up, often for more than an hour, to pump water by hand from wells to fill plastic bottles and cans.

“It has an influence on our lives, it is really inconvenient,” one 34-year-old resident, who agreed to provide only his first name, Denis, said as he collected water. “But the truth is, it’s not a problem. The problem is we have a war.”

Smoke rose from the left bank of the Dnieper River in Kyiv, either from a missile strike or where Ukrainian forces shot it down.

Associated Press reporters saw soldiers inspecting a crater and debris from where one of the missiles landed on the outskirts of Kyiv. The missiles flew fast and low and sounded like bombs exploding, according to witnesses.

“It was scary, actually,” said Oleksandr Ryabtsev, 28, who was on his way to work. “I raised my head and it was flying there. You could see this cruise missile, I didn’t even go to work. I went home.”

Prime Minister Shmyhal said that in the Kyiv, Zaporizhzhia, Dnipropetrovsk and Kharkiv regions, emergency power shutdowns were underway. “Today, just like in previous weeks, it is important that Ukrainians consume energy mindfully and reduce the load on the grid,” the official said.

In the eastern city of Kharkiv, two strikes hit critical infrastructure facilities, according to authorities, and the subway ceased operating.

Critical infrastructure sites were also hit in the Cherkasy region southeast of Kyiv. In the Kirovohrad region of central Ukraine, an energy facility was hit, according to local authorities. In Vinnytsia, remnants of a missile that was shot down landed on civilian buildings, resulting in damage but no casualties, according to regional Gov. Serhii Borzov.

Power was cut to parts of Ukraine’s train network, the Ukrainian Railways reported.

The attacks come two days after Russia accused Ukraine of a drone strike against Russia’s Black Sea Fleet off the Russia-annexed Crimean Peninsula. Ukraine has denied the attack, saying that Russia mishandled its own weapons, but Moscow still announced it was retaliating by halting its participation in a U.N. and Turkey-brokered deal to allow safe passage of ships carrying grain from Ukraine.

Turkish Defense Minister Hulusi Akar urged his Russian counterpart, Sergei Shoigu, in a phone call Monday to “reconsider” Moscow’s suspension of its participation in the grain deal, which has allowed more than 9 million tons of grain to be exported from Ukraine. According to a statement, Akar hailed the deal as an example of how problems can be solved through “cooperation and dialogue” and argued it’s a “completely humanitarian activity” that should be kept separate from the conflict.

Monday’s strikes were the third time this month that Russia unleashed massive attacks on Ukrainian infrastructure. On Oct. 10, a similar attack rocked the war-torn country following an explosion on the Kerch Bridge linking Crimea to mainland Russia — an incident Moscow blamed on Kyiv.

One of the Russian missiles Ukraine shot down landed on a Moldovan border city, causing damage but no casualties.

Moldova’s interior ministry released photos showing a thick plume of smoke rising over the northern city of Naslavcea, on the border with Ukraine, as well as broken house windows.

In another development, Russia’s Defense Ministry on Monday reported completing a partial mobilization of troops, ostensibly fulfilling a promise to end the call-up at 300,000 men. Some human rights lawyers, however, warned that only Putin can end the call-up by signing a decree.

Suzan Fraser in Ankara, Turkey; Karel Janicek in Prague; and Sabina Niksic in Sarajevo, Bosnia, contributed to this report.

This story has been corrected to show that Monday’s strikes were the third major Russian barrage against Ukrainian infrastructure this month, not the second.