‘He’s so happy where he is’ – Boston Herald 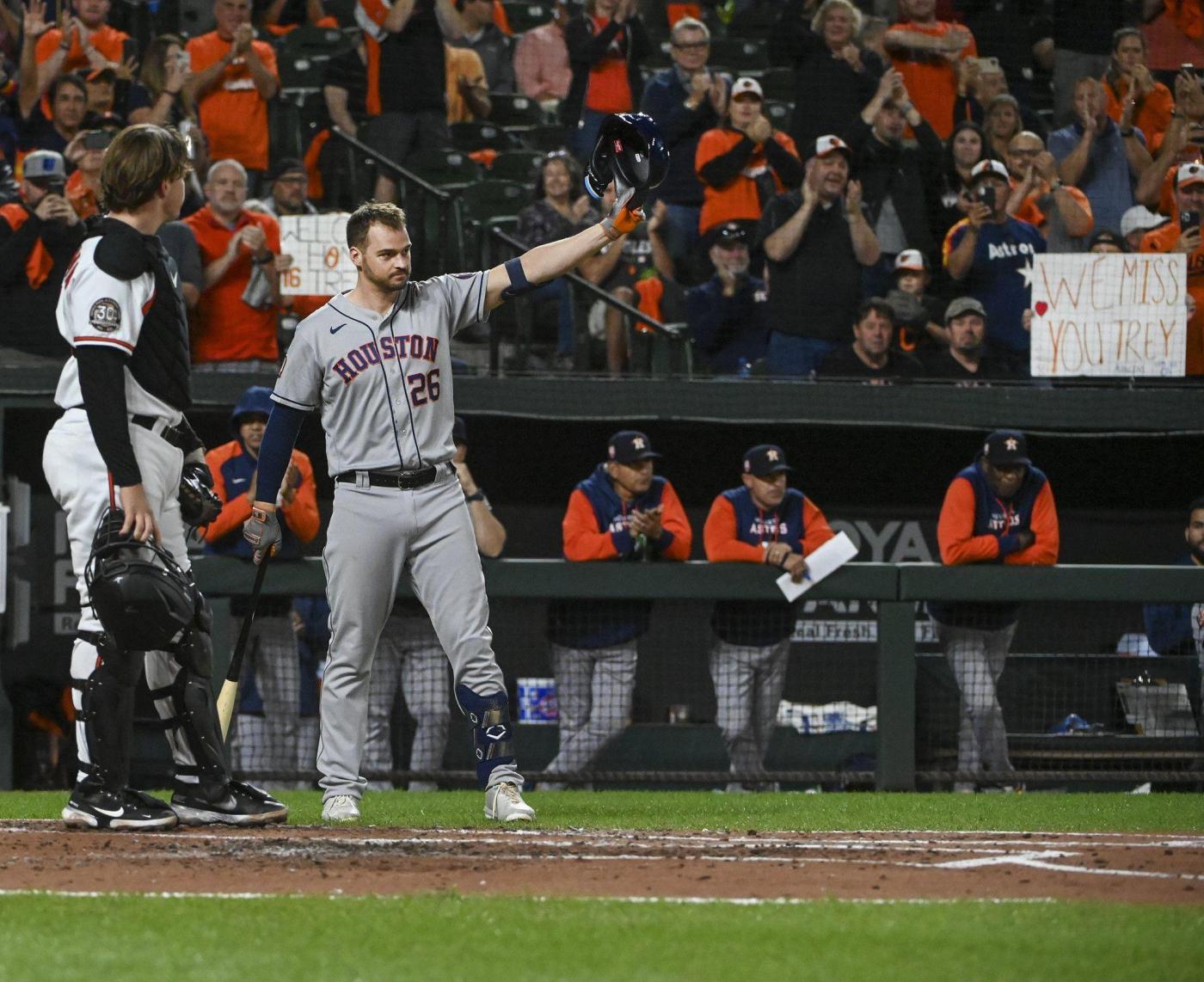 Once it was all said and done — the throng of cameras around Trey Mancini’s locker, the standing ovation for the beloved former Oriole and finally a baseball game — Mancini and Sara Perlman, his fiancée, returned to their hotel room Thursday night in the city they once called home.

From across the water, they could spot their old condo in Locust Point. But in Harbor East, the couple are away from all the coffee shops and restaurants they knew and loved in their old neighborhood. For the first time in his career, Mancini rode the team bus to Camden Yards. Perlman sat near the visitor’s dugout, a new vantage point in a stadium she is otherwise well accustomed to.

So, Perlman asked Mancini a simple question: Was it weird being back?

It was a feeling of contentment, for them both. Mancini and Perlman can look back on their time in Baltimore with fondness — it’s where they met and fell in love, where Mancini overcame colon cancer and with whom he competed in the Home Run Derby.

But now they’re in Houston, with a rental home for the remainder of the season. Now Mancini is an Astro after a move at the trade deadline propelled him into a World Series race. There’s so much to love about Baltimore — and they’ll never forget it — but there’s so much to focus on moving forward.

They’d never trade their time with the Orioles. But to be with the Astros now, discovering a new city while gearing up for the postseason? Mancini and Perlman could turn off the lights in their hotel room knowing there were no regrets about how this all played out.

“The reality is, Trey’s now on a playoff team, with a team he loves that’s given him an opportunity he hasn’t had since the first month of his career,” Perlman said, sitting beside the visitor’s dugout as Mancini stood with a bat in his hands, wearing a road grey uniform.

“He looks back with nothing but love for Baltimore,” Perlman continued. “But at the same time, I’d be lying if I said Trey really didn’t love Houston.”

The trade to the Astros moved Mancini away from a fan base that connected with him on a personal level. It’s hard to find that in a new city, at least immediately. Throughout his time with the Orioles, Mancini jerseys were seen all over the ballpark. The standing ovation and helmet tip Mancini gave upon arriving in the box for his first at-bat Thursday was expected and appreciated.

It’s different in Houston, and he doesn’t necessarily mind it. Perlman joked that there are about four Mancini jerseys at Minute Maid Park, “and I’m one of them.” He doesn’t need to be the face of the franchise, a 30-year-old thrust into veteran status with the Orioles because the rest of the clubhouse has such limited experience.

Instead, he’s a solid player on a club full of big names, from right-hander Justin Verlander to infielder José Altuve. That allows Mancini to turn inward, working to break out of the slump he’s found himself in of late. And with the first homecoming game done Thursday, Friday and the rest of the series in Baltimore only will be easier.

“You get the first game over with, and like I said, it’s just like any other series,” Mancini said. “More importantly to me, there’s a couple things I’m battling through at the plate, just a couple habits that I’ve had in the games the past couple weeks that have been tough. So more than anything, I want to feel a bit better in that sense, because this team I’m on, we have big goals ahead of us. And my main goal and the reason I got traded here was to help us accomplish that.”

As Mancini nears free agency for the first time in his career, the trade offers another opportunity. When Mancini hears offers from teams this offseason — be it from the Orioles or Astros or another team — he can weigh what he learned from playing with two clubs.

The added perspective can shape his decision. But before that, without knowing whether he’ll find himself on another playoff team the rest of his career, Mancini and Perlman can enjoy all that comes in October.

After Mancini’s first at-bat as a visitor at Camden Yards, Perlman posted a photo of Mancini at the plate wearing his new No. 26 jersey. The deluge of responses were all similar, expressing how weird it looked to see Mancini at Camden Yards with a different number on the back of a different uniform.

“To me, it’s funny, it didn’t look as weird as everyone else thought,” Perlman said, “because I’ve had so much time looking at the No. 26 in a Houston Astros uniform. I thought it would feel more strange coming back than it does. It is weird — don’t get me wrong. But, I don’t know, I guess because I’ve seen him so much in an Astros uniform, it didn’t feel as strange.”

It’s the same for Mancini, even though it’s his first trip back. Barring a different view from the visitor’s dugout — looking out at the B&O Warehouse instead of the left field wall — not much shook Mancini.

Some of the raw emotion left Mancini after the Orioles visited Houston to face the Astros last month. He saw his former teammates and coaches wearing a different uniform than him, then went on with his new team toward the postseason.

“I think it’s healthy,” Perlman said. “I think if he was longing to be back here, I’d be like, ‘Damn, that really stinks.’ Instead, he’s like, best memories, but he’s so happy where he is.”

On Thursday, as Perlman and Mancini looked across the water from the Astros hotel to their old condo, Perlman turned to her fiancée.

“Should we go home?” she asked.

But she asked with the knowledge that the condo in Locust Point is no longer their home, just as Camden Yards is no longer Mancini’s home ballpark. That chapter ended. And no matter how much they loved experiencing Baltimore, they have a new home they’re learning to love just as much.