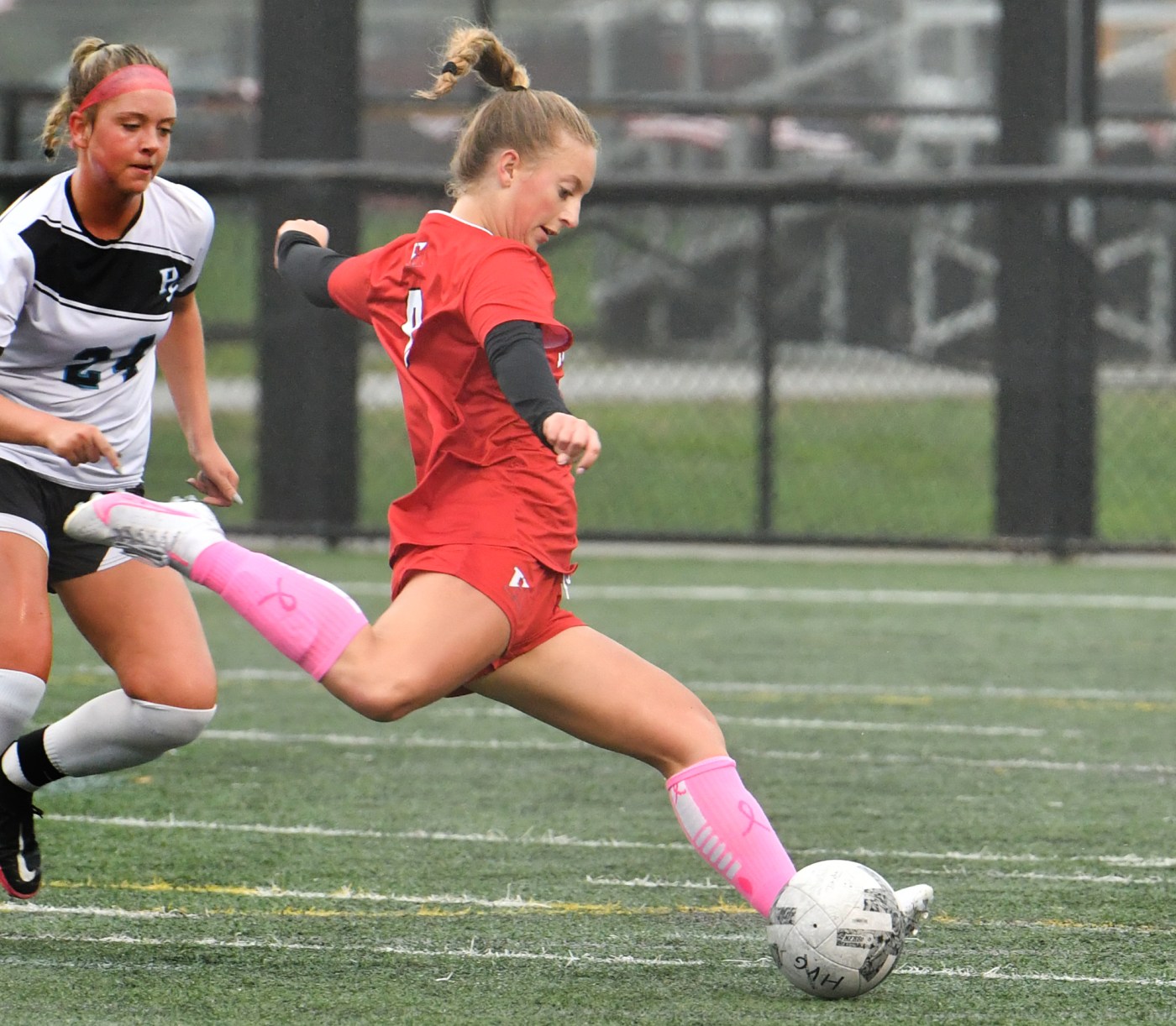 It’s not easy to make consecutive trips to the state championship, in any sport.

When you graduate most of your starters from the previous season, and change coaches on top of things? You’re basically laying a new foundation by that point.

Unless of course, you have an athlete as talented as Sophie Reale returning. Couple that with the rise of junior Claire Murray, and suddenly Hingham finds itself barreling down a similar path as last season, when the school embarked on a miraculous journey to the Div. 1 final.

The school ultimately fell short in the title game (a 3-2 loss to Natick), but now, Reale is determined to leave one final, indelible mark on her decorated career by winning a state championship before taking her talents to UCLA in 2023.

“I think we kind of started off a little slow at the beginning of the season,” Reale said. “I think that keeping a positive mindset really helped us push forward, and become as close as we are right now.”

Like her older sister Lilly, Reale has consistently faced tough defensive looks from her opposition. Yet, no matter what programs have thrown her way, the forward has just continued to dominate.

Coach Mary-Frances Monroe, after serving as an assistant coach on Sarah Dacey’s staff last fall, took over on the sidelines at Hingham this season. Coincidentally, Monroe got to know Sophie while attempting to recruit Lilly during her tenure with the University of Miami’s soccer program a few years back. The two were reconnected last season when Monroe decided to return to New England.

Hingham graduated seven starters from last year, but the scoring has continued. To this point on the season, Reale has already registered 17 goals, including a five-goal performance against North Quincy back on Sept. 10. Meanwhile, Murray has nine to her credit.

“Our goal, just like any year being a part of Hingham, is to get to the state championship,” said Monroe. “The hardest part is getting there. Then, hopefully (we’ll) be winning, competing.”

Like Lilly, Reale originally committed to Boston College a few years ago. Due to coaching changes in the NCAA ranks, both made the choice to recommit to UCLA.

The senior intends on blazing her own career path. Playing on a collegiate team with her older sibling would simply be a bonus at this stage.

“I don’t think (Lilly) had much of an influence on me going there,” said Reale. “It was kind of my own decision, but I am still excited to be playing with her.”

Murray believes her team has shaken off the initial rust. Now, it’s simply a matter of maintaining momentum.

“Obviously, a new team dynamic is there for sure,” said Murray. “It took a little bit to come and adjust. But I think we’ve just gotten closer as friends. Once that started to form, then we started to play better on the field. We definitely miss the seniors from last year, but this year I think we’re going to be good.”

At St. John’s Prep, excellence is expected, and it’s become commonplace at the Danvers-based institution over the years.

However, up until recently, its soccer program had struggled within the gauntlet known as the Catholic Conference, which had been dominated by schools like BC High and Xaverian.

Last season, St. John’s Prep entered the Div. 1 tournament as the No. 17 seed. Then the Eagles caught fire and enjoyed a Cinderella Run to the Round of 8, where they fell to the eventual state champion, Brookline (a 2-1 overtime loss).

It was precisely the kickstart that St. John’s Prep needed. One year later, the Eagles (8-0-1) are sitting in a class with some of the best teams in the commonwealth, ranked third in the MIAA’s latest Div. 1 power rankings (4.1071 rating).

Led by team captains Will Minor, Callum Rigby and Alex Borkland, the Eagles find themselves chasing the program’s first state title since 2006.

“Speaking personally, that’s always been my dream,” said Minor. “Since I’ve come into the school when I was a freshman, I remember telling myself: ‘My goal is to be St. John’s Prep’s varsity captain, and bring us a state championship.’ I know it has been so long, and it would just mean everything to me. It would mean everything to this team.”

During the course of the 2021 season, Dave Crowell and his coaching staff decided to switch to a 3-5-2 formation. The squad immediately responded with success, and the team has carried the same game plan into this year.

“Last year, we had a lot of younger guys,” said Rigby. “Like juniors and sophomores. I think learning the formation, and now implementing it, helps us play well.”

The lone blemish on St. John’s Prep’s record has been a tie with St. John’s (Shrewsbury) on Sept. 20, a school ranked second overall in Div. 1 at the moment. The Eagles have allowed just four goals all season. In addition to Minor’s efforts, the Eagles have also been aided defensively by Jeffrey Lopez, Ross O’Brien and Ben Bailey. Senior goalkeeper Yianni Andrikopoulos has recorded five shutouts.

“We’ve had a lot of returners,” Crowell said. “It’s an experienced team. With the good run through the tournament, we’re hopeful… It’s definitely bolstered us during the season. When the tournament comes along, that experience is going to pay off.”

In Minor’s eyes, the key to maintaining success is to remain humble. The road through the Div. 1 playoff field will be littered with possible landmines, and the senior is hopeful that with improved standing, that their odds of reaching the pinnacle will continue to increase.

“We can’t slow down now,” Minor said. “Because we’ve had a great start, but starts don’t matter as much if we don’t finish well.”