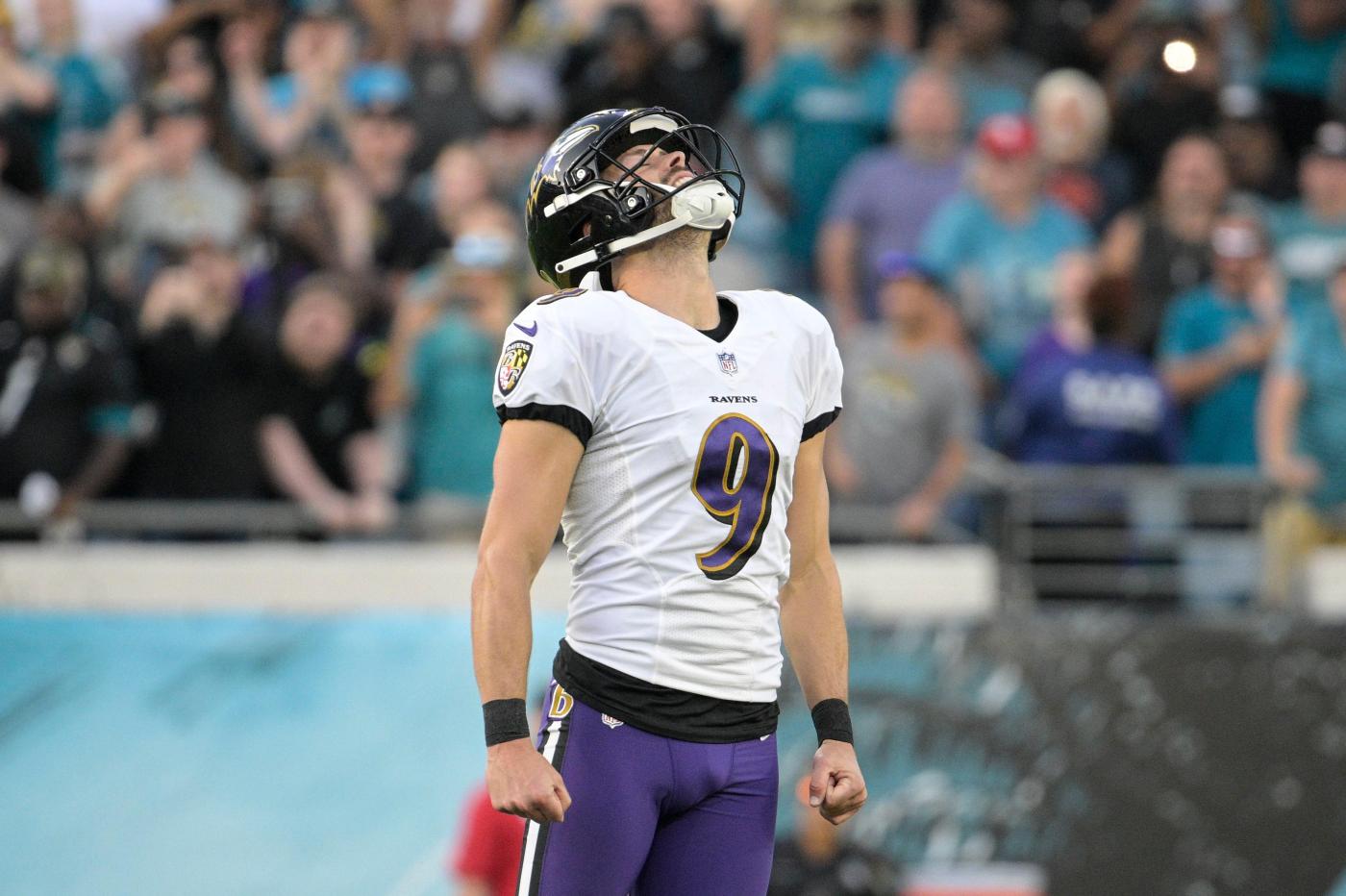 Kicker Justin Tucker’s miss from 67 yards didn’t just end the Ravens’ hopes of an improbable rally Sunday against the Jacksonville Jaguars. It also ended one of the NFL’s most remarkable field goal streaks.

Before his last-second try fell short of the crossbar at TIAA Bank Field, Tucker had made 65 consecutive field goals in the fourth quarter and overtime, the longest such streak in NFL history. He was also 17-for-17 on attempts in the final minute of regulation entering Sunday, a stretch that included an NFL-record 66-yarder as time expired in a comeback win last year over the Detroit Lions.

Tucker was the Ravens’ only reliable source of scoring for the first three quarters of their 28-27 loss Sunday, connecting on field goals from 27, 29, 55 and 24 yards and surpassing kicker Stephen Gostkowski for the most points scored in the first 11 years of a career in NFL history (1,458).

After quarterback Trevor Lawrence led the Jaguars to a last-minute touchdown and go-ahead 2-point conversion, the Ravens trailed 28-27 with just 14 seconds left. They reached Jacksonville’s 49-yard line with two seconds remaining. Rather than have quarterback Lamar Jackson throw up a prayer, coach John Harbaugh called on the most accurate kicker in NFL history. “I think the kick has a better chance than a Hail Mary,” Harbaugh said afterward.

Tucker’s latest shot at history was accurate enough, as straight as an arrow. But his long run-up didn’t generate enough power. Jaguars fans started cheering before the ball even fell to the grass. Tucker said afterward that he was “struggling to really just get the ball to go in either direction” from long distance before the game.

“The fact that we had a chance and I didn’t deliver, it’s heartbreaking to me at this point, especially when it’s a kick that I know I have the ability to make,” he said. “[Long snapper] Nick [Moore] and [holder] Jordan [Stout] did an excellent job throughout the day. They did a great job on that kick, too. It just kind of wasn’t in the cards for us, and the only thing that we can do is just keep working, move on and try to beat a good Denver opponent when they come to visit us in Baltimore next week.”

Everything about Ravens tight end Josh Oliver’s performance Sunday was storybook — everything but the ending.

Oliver, a third-round draft pick of the Jaguars in 2019, recorded team and career highs in receptions (four) and receiving yards (76) in his return to Jacksonville, including a go-ahead 12-yard touchdown catch with just over two minutes remaining. But that was little consolation after another late collapse.

“Definitely tough,” Oliver said of the loss to the Jaguars, who traded him to Baltimore in March 2021 for a conditional seventh-round pick, then watched him develop into one of the NFL’s best blocking tight ends. “It’s a blessing to be back out on the field. I have to thank God. Coming back here healthy is a huge thing for me, but it’s also tough. It’s a loss.”

Oliver, who struggled with injuries early in his career, now has single-season highs in receptions (11), receiving yards (130) and receiving touchdowns (two). But he could’ve had even more Sunday. One would-be touchdown pass bounced off his fingertips early in the third quarter, and the Ravens had to settle for a red-zone field goal.

Later, on his go-ahead catch-and-run score, Oliver could have stayed in the field of play in hopes of draining the clock further. But the first-down marker was at the Jaguars’ 1, and Oliver indicated that the Ravens’ priority then was taking the lead, not managing the clock.

“I think we were thinking, ‘Score first, get up and the cards [will] fall where they do,’” he said.

Harbaugh said he didn’t get an explanation from officials on why Jaguars wide receiver Marvin Jones’ last-minute, shin-dragging touchdown catch was confirmed after a review.

On the 10-yard grab over Ravens cornerback Marcus Peters, Jones got only one foot and part of his shin down inbounds. That was enough, though.

“I was pretty sure that wasn’t a catch, but I think whatever they called on the field, it was so close that it was going to stand,” defensive lineman Calais Campbell said. “I guess they say a shin counts as two feet or whatever. You know, I thought that for sure wasn’t a catch. [We’ve] got to just show up and play football. Whatever they call, you’ve got to live with it. We can’t control the circumstances. Just continue playing football. After they got that, you’ve got to find a way to get a stop and win the ballgame.”