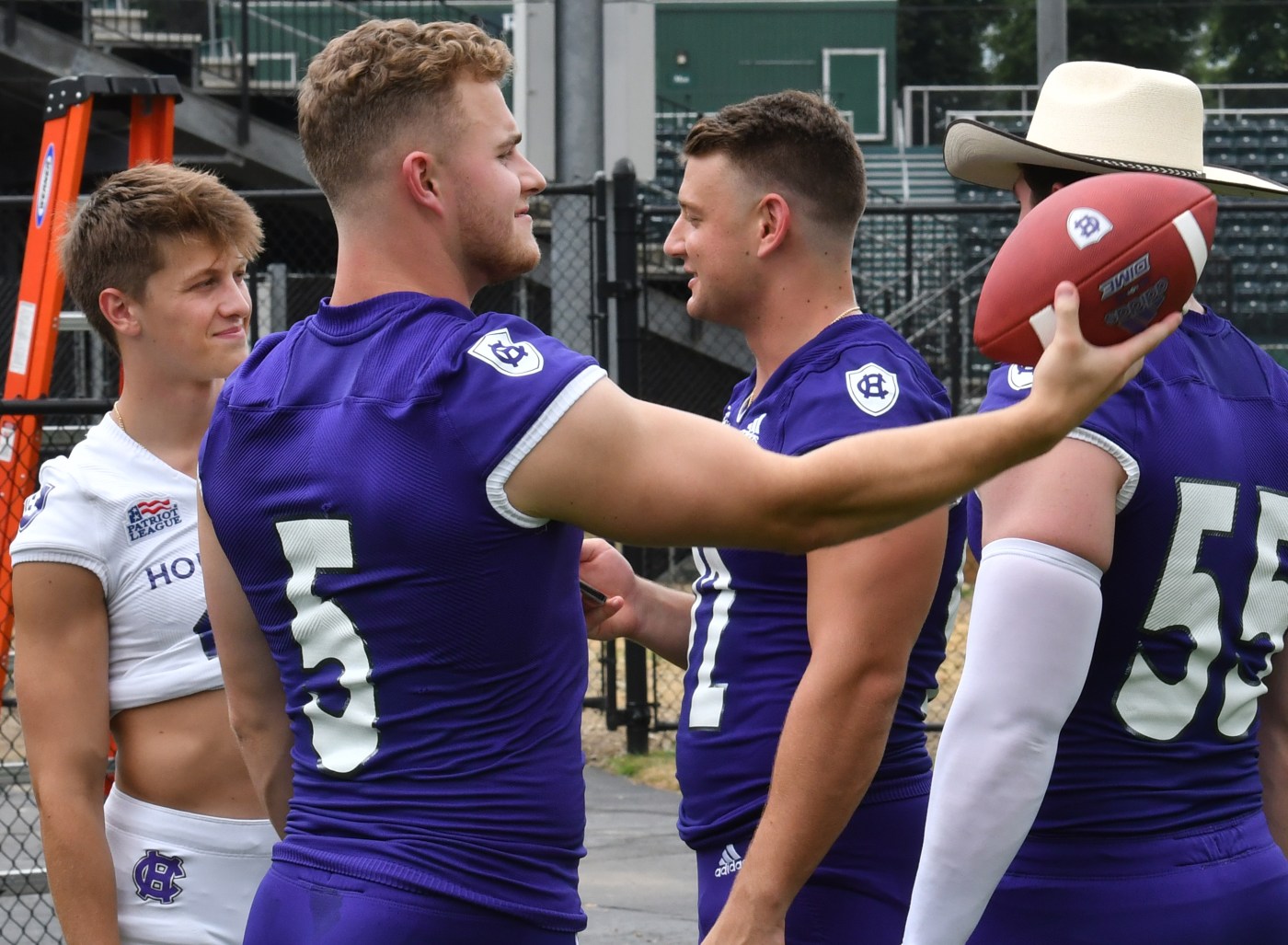 WORCESTER – Holy Cross coach Bob Chesney develops linebackers who can defend the box without being boxed in.

Seniors Jacob Dobbs and Liam Anderson are fierce all-purpose interchangeable linebackers that fit Chesney’s definition and seldom come out of the game regardless of down and distance.

The two converted high school safeties posted mind-boggling numbers in all the significant categories last season on a team led the FCS in total defense, allowing 254.4 yards per game.

Punishing tackles at or behind the line of scrimmage are the hallmarks of their respective games, but Dobbs and Anderson are equally effective rushing the quarterback and dropping back in coverage.

“As much as you might want to paint them into a box, they both can do all the other things just well and they are complete football players,” said Chesney during the Crusaders’ media day Wednesday at Fitton Field.

“We have a ton of NFL scouts coming through here looking at these guys and they should be. They were kept pretty clean (healthy) over the past few years and they are just phenomenal instinctual tough football players,” Chesney added.

Dobbs was selected the Patriot League’s Defensive Player of the Year and was named a first team All-American by Stats Perform. Dobbs garnered additional All-American honors from AFCA, HERO Sports and the Associated Press and was a finalist for the Buck Buchanan Award given annually to the top defender in FCS.

On most FCS defenses, Anderson would anchor the front seven for his abilities as a tackler and a turnover machine. The 6-3, 225-pounder from Flanders, N.J., finished with 81 tackles, 15 tackles for a loss, 7.5 sacks with three interceptions and a forced fumble. Both players were named first team Patriot League All-Stars.

“You can show me any two you want in the country and I don’t know if there are any better than these two as a pair,” said Chesney. “They are the yin and the yang.

“One is very physical and tough and downhill and the other is just that with a whole other side to him.”

The Crusaders are ranked No. 16 in the nation and consensus favorites to win their fourth consecutive Patriot League title, a viable opportunity that has purple reign written all over it. Holy Cross was awarded 71 points and collected 11 of the 14 available first-place votes.

“We constantly say we need to get better every single day,” said Dobbs, a native of Macomb, Mich., and an unabashed long-suffering Lions and Wolverines fans. “You need to improve every day and with the coaching staff that we have, we are never satisfied with what we have done.

“In order to go where we want to go which is ultimately being the last team standing at the end of the season, you have to do something you have never done before. Every single day we are trying to do something we haven’t done before and compete at a new level.”

Dobbs and Anderson have been building toward this season in spite of the restrictions and abbreviated scheduling caused by the pandemic. The Crusaders took a big step towards Dobbs’ objective last season when they won the first FCS playoff game in program history, a 13-10 defensive grind against Sacred Heart at Fitton Field. Holy Cross made a good showing in the second round but fell 21-16 at Villanova.

“Every year we are trying to build off the last and last season we are coming off a playoff win,” said Anderson. “How do we take one playoff win and make it another win and go on a run from there?

“That’s been the goal since we had our breakup meeting last season. How do we make that next step on the national level in the playoffs?”