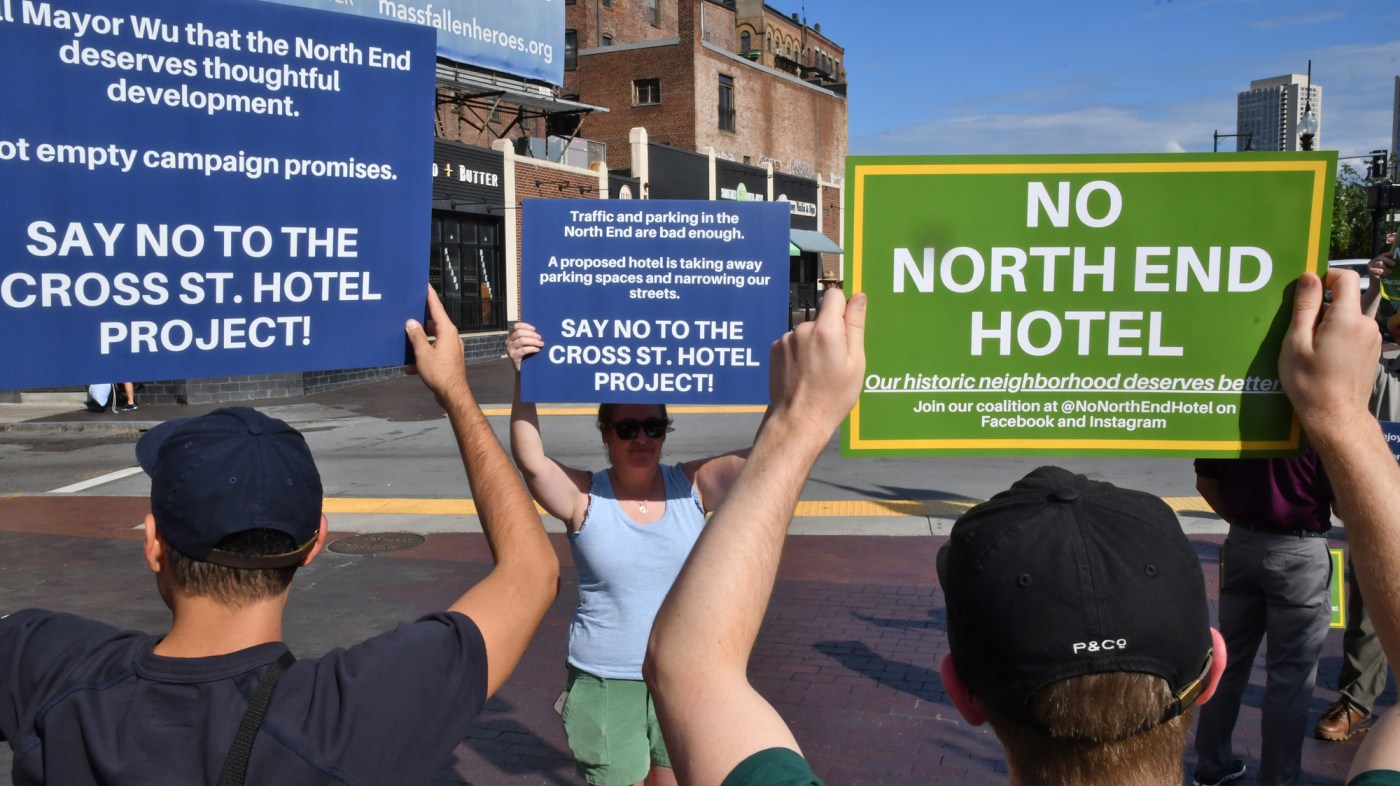 Opponents to a North End hotel development proposal gathered Thursday to push back on the project’s latest advancement, arguing if a big developer wants to “cast a shadow” over the neighborhood they should at least follow the proper process.

“We as a neighborhood, and as community members in Boston, feel like we’ve just been shut out of the whole process,” said Mary Beth Sweeney, who owns an abutting property and has organized much of the opposition.

The project in question is a “134-key boutique hotel with two ground-floor restaurant uses and seasonal rooftop dining with a total seating capacity of approximately 300” at 42 Cross St. in the North End. The development, proposed by Cross Street Ventures, is scheduled for a Boston Zoning Board of Appeals hearing on Tuesday.

Sweeney and other abutting business owners, along with the community groups North End/Waterfront Residents Association and the North End/Waterfront Neighborhood Council, sent objections to the hearing to the mayor’s office and the BPDA. The opponents argued the developer had “completely abdicated” the required public input process.

Sweeney said she and others had learned the process would be going forward over objections Monday and quickly “threw together” Thursday’s rally. Around 15 to 20 protestors took up signs and collected signatures from community members during the event.

The protestors said they have wide-ranging concerns about the proposal, noting the hotel will increase traffic in the area and decrease parking, block out and arguably “take over” the abutting public park, and make the community more transient — unlike affordable housing or retail space.

“We’re losing our community in so many ways,” said David Kubiak, a 37-year North End resident and member of NEWRA. “It’s being taken over by commercialization and tourism.”

Sweeney previously filed a lawsuit alleging the building is not within the area’s zoning limit, which was finally shut down Wednesday.

The developer’s ability to bypass the process, Sweeney alleged, has made it apparent they have some connections in City Hall.

The city lists the project as adjacent to the Rose Fitzgerald Kennedy Greenway and across from the Haymarket MBTA station. “The Project will enhance (the area with) an open-air passageway connecting the Greenway to the North End’s Cutillo Park,” the city added.