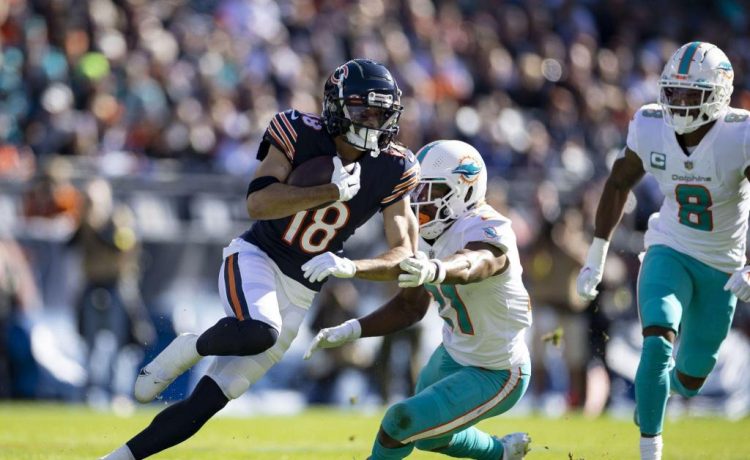 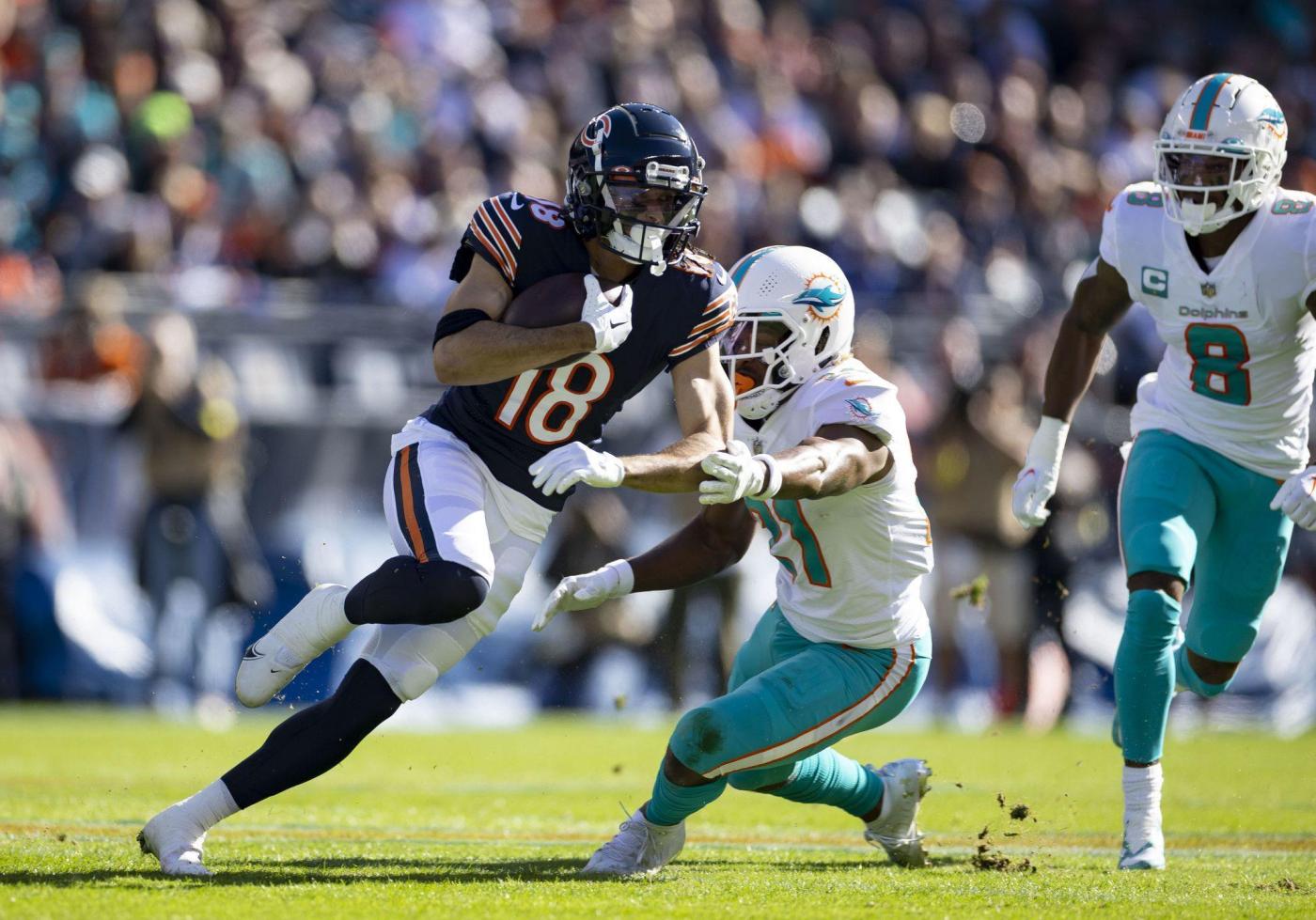 Every week, Chicago Bears wide receivers coach Tyke Tolbert gives his players a bullet-pointed study guide with close to 20 instructions and clues specific to that week’s opponent and game plan.

But there is one staple, the same tip repeated at No. 8 for every game.

“Ask those guys,” Tolbert said. “They better be able to quote that first sentence of tip No. 8.”

“Be the best player on the field with or without the ball,” St. Brown said.

Newcomer Chase Claypool? Versed yet on No. 8?

“Be the best player on the field with or without the ball,” he echoed. “That’s one of the standing rules in our room.”

This is part of Tolbert’s emphasis on reminding receivers there is so much more to playing their position than running good routes and making big catches.

“It’s all about finishing,” he said. “On every play. Whether you have the ball or not.

“Sometimes it’s easy for a receiver to go out for a pass or be involved in a running play with someone else carrying the ball and then just stop and watch. We don’t stop and watch here. We finish every play.”

That leads us to the effort-based grading category Tolbert created years ago to provide a constant reminder for his receivers to bring it on every play.

The day after each game, as the Bears receivers go back through their performances, Tolbert calls out those in his room guilty of committing an “Impossible.”

That’s the hustle metric Tolbert invented early in his seven-season stint with the Denver Broncos (2011-17).

“You see a lot of loafing by receivers in the NFL all the time,” Tolbert said. “You watch guys come off the ball, take a couple steps, then just stop and watch the play. I see that and I’m like, ‘That’s just impossible! Not to touch anybody on a run play? That’s impossible.’

“So I started giving out ‘Impossibles.’”

Be the best player on the field with or without the ball.

Tolbert’s favorite edict may be as important this season as it has been in any of his 20 years coaching in the NFL. As part of the league’s most dominant rushing attack — not to mention the 32nd-ranked passing offense — Bears receivers understand they must excel without the football for the offense to succeed.

No team in the league has run the ball more this season. And no team has fewer passing attempts, completions or passing yards.

“Blocking as a receiver is a want-to thing,” St. Brown said. “Technique is obviously involved as well, but it is about desire. Most receivers only want to catch the ball. But you have to make blocking a part of who you are and what you do as a professional.”

For Tolbert, the philosophy behind an “Impossible” is straightforward: A running play never should come and go without every receiver on the field making contact with a defender. Someone. Anyone. Anywhere.

Even if a play is going the other way and the defense flows away from a receiver, he has an obligation to hustle to touch an opposing player before the All-22 camera cuts off.

“Sometimes guys will argue: ‘Coach, I blocked a guy. The film turned off!’” Tolbert said. “And I just say: ‘I didn’t see it. You didn’t get there fast enough.’”

Ideally, Bears receivers would understand their assignments on every play and find the proper defender to engage and block in a way that springs a big run. Through 13 games, the Bears have 26 runs of at least 15 yards.

Occasionally, though, receivers will find themselves seeking an unsuspecting defender just to create muscle memory and avoid being docked for an “Impossible” on their grade sheet.

“Sometimes a DB will be running away and you’ll catch them by surprise a second or two after the whistle,” fifth-year veteran Dante Pettis said. “They’ll be like: ‘Yo, chill out! Chill out! Play’s over.’”

Added Darnell Mooney, who’s now on injured reserve with an ankle injury: “That instinct kicks in and you’re just speeding across the field to go touch somebody. (The defender will say:) ‘Bro, stop touching me. What the heck are you doing?’ And you’ll just be like: ‘Nothing much, bro. Just chilling.’”

At times it morphs into a playful game of recess tag.

“Defensive players start to figure out what we’re doing,” Tolbert said. “And I’ve seen times where the play is over and defenders are running away from our guys, just trying not to get touched.”

All of this contributes to the attention-grabbing success the Bears have enjoyed with their running game. They’re on pace to top 3,000 rushing yards for the first time in franchise history, a statistical milepost that offers added incentive.

Quarterback Justin Fields, with a team-best 905 rushing yards, has been the engine of the ground attack. But Bears receivers have remained invested in aiding the cause and have adopted Tolbert’s “Impossibles” as a motivational tool.

“There’s a mindset element to it of getting you conditioned to stay focused,” Pettis said. “You can’t take a play off. But this adds a fun twist for us.”

Pettis first connected with Tolbert in November 2020, when the New York Giants claimed him off waivers. So he makes it clear he’s not bragging when he asserts that he probably has the fewest “Impossibles” of any Bears receiver this season.

“I’m the only one who came into this thing understanding what that standard was,” Pettis said. “When I came into that room in New York, all those guys had been doing that for two or three years. If someone messed up, everyone was like, ‘Impossible! Impossible!’

“It was quick to hit me. I didn’t want to get called out.”

That’s part of the point. It rarely takes very long for a player to catch on to such a basic principle with the accompanying peer pressure. That’s why Tolbert was pleased when Claypool’s blocking efforts jumped off the video of the Week 12 loss to the New York Jets.

“It quickly becomes a habit,” Tolbert said. “And an effort by the entire group.”

Before suffering a season-ending ankle injury — appropriately, while engaged with a defender during a David Montgomery run — Mooney won over Tolbert with his devotion to blocking.

“He has honestly been fun to watch in that regard,” Tolbert said. “For a guy who is not blessed with imposing size, he blocks like a guy who is much bigger. And he’s so fearless. He cracks defensive ends, cracks linebackers, hustles to get on his downfield blocks. He’s very unselfish in that way.”

Mooney drew praise in Week 9 after he helped Fields finish a 58-yard touchdown scramble against the Miami Dolphins by peeling off his route and racing across to cut off safety Jevon Holland more than 25 yards beyond the line of scrimmage.

“This is all a part of toughness and want-to,” Tolbert said. “With receivers, everybody gawks at the guy who has eight catches, 125 yards and three touchdowns. But what about the other 60 plays? What are they doing then? I focus on those other 60 plays. And our guys have bought into that.”

At Halas Hall, there’s plenty of desire among the Bears receivers. Not to mention an ongoing quest to avoid pulling off the “Impossible.”