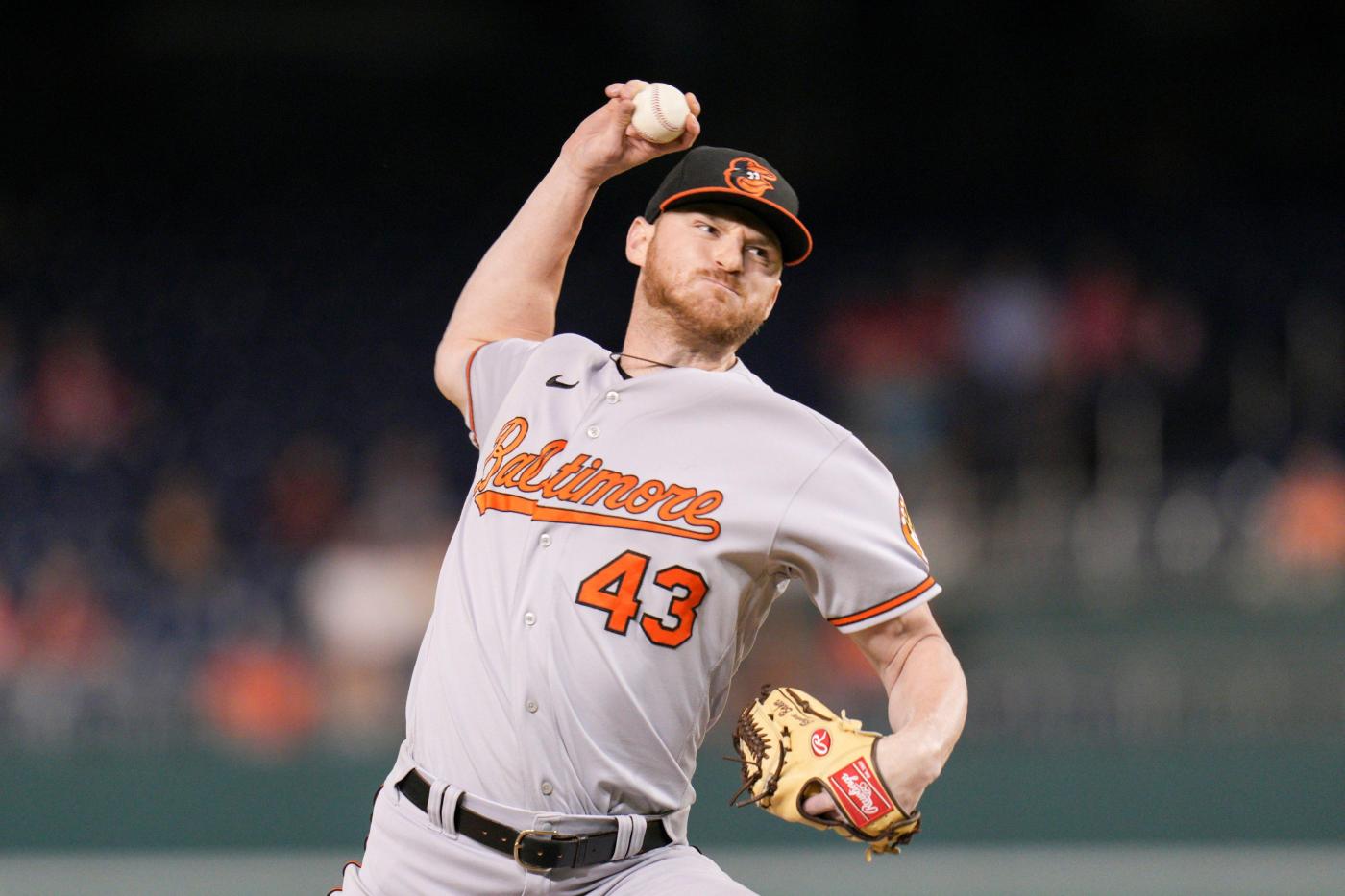 As Adley Rutschman came to the plate in Saturday’s seventh inning, a chant broke out at Yankee Stadium.

In reality, the cheers were for New York Yankees right fielder Aaron Judge, whose 61 home runs are tied for the American League record and could earn him the circuit’s Most Valuable Player honor. But Rutschman’s season could also lead to some hardware for the Orioles’ rookie catcher.

His late May arrival propelled the Orioles into a surprising playoff push that ended over the weekend, and when his bat began to take off in mid-June, so too did Baltimore. On Monday, Rutschman will likely be recognized as the Most Valuable Oriole, as voted on by local media. Days later, 30 baseball writers throughout North America will cast ballots that will determine whether he’s also the American League Rookie of the Year.

In doing so, they’ll potentially be determining when Rutschman becomes a free agent.

As part of the new collective bargaining agreement that came out of Major League Baseball’s lockout of the MLB Players Association, players who finish in the top two in their respective league’s Rookie of the Year voting will be awarded a full year of service time. In most cases, three years of service time are required to become eligible for the salary boosts provided by arbitration, with six years needed to become a free agent.

Voting for Rookie of the Year, as well as MVP, Manager of the Year and the Cy Young Award is performed by the Baseball Writers’ Association of America, which also determines entry into the Baseball Hall of Fame. For the rookie honor, two writers representing the 15 cities of the teams in each league select the top three players they view as deserving.

And despite not reaching the majors until 40 games into the year, Rutschman certainly fits that bill. Among first-year players with at least 300 plate appearances, the 24-year-old leads with 35 doubles, setting a record for an Orioles rookie or catcher, and ranks second in walks, on-base percentage, OPS and Fangraphs’ version of wins above replacement. In the last of those, he trails outfielder Julio Rodríguez, the presumptive AL Rookie of the Year favorite after posting a 27-homer, 25-steal season to help the Seattle Mariners to their first playoff berth since 2001.

If not for a right tricep strain suffered just as major league spring training began, Rutschman possibly would have broken camp with the Orioles, joining Rodríguez and other candidates such as Cleveland outfielder Steven Kwan (a teammate of Rutschman’s at Oregon State), Astros shortstop Jeremy Peña and Kansas City infielder Bobby Witt Jr. But because of that delay, Rutschman will finish short of the number of days in the majors necessary to earn a full year of service time, postponing when he will become a free agent from after the 2027 season to after 2028 — unless he finishes in the top two of AL Rookie of the Year voting. This year, he’s the only AL candidate who the CBA’s new rule will potentially affect.

Seattle Times columnist Larry Stone, the president of BBWAA, said the organization isn’t a fan of its members having such a direct impact on the players they cover. He noted that an early proposal from the MLBPA had the top five vote recipients awarded with a year of service, but the BBWAA felt that would risk giving individual votes too much influence; the group found that five times over the previous two decades, one vote had been enough to get a player into the top five.

There’s a risk of impropriety, where players, their representatives or front office members could persuade writers to vote certain ways. A media member’s relationship with a player could also impact how he or she votes without the player’s direct influence.

An MLB spokesperson declined to comment for this story, while the MLBPA did not respond to a request for comment.

“We don’t want writers influencing the earning power of the people that they cover, which could put them in potentially compromising situations,” Stone said. “But we also trust that our voters will vote with their hearts and their minds and not succumb to that. But it’s unfortunate that we’re being put in that situation.”

As a counter to the new CBA, which will last five years, the BBWAA has considered announcing only the award winners and not publicizing individual votes, “but we’re an organization that believes in transparency, so there’s a lot of discomfort with that,” Stone said. He added an alternative would be increasing the voting pool for each award, diminishing the value of a single vote.

This year, BaltimoreBaseball.com’s Rich Dubroff and Dave Ginsburg of the Associated Press are the AL Rookie of the Year voters for the BBWAA’s Baltimore-Washington chapter. Both said they don’t expect the attachment of service time to affect how they handle Rutschman’s place on their ballots.

“I don’t like that my vote will influence how his career is impacted, his future, but it’s not going to impact the way I vote,” Ginsburg said. “Same thing when I vote for Hall of Fame. For me, it has nothing to do with what it does for the person. I just vote on whether he’s worthy, and whether Adley’s worthy of being [No.] 1, 2 or 3 has nothing to do with how it will impact his future.”

Dubroff pointed out that he has voted for players he’s covered throughout his career; when Orioles closer Zack Britton didn’t blow a save in 2016, Dubroff was one of five voters to have the left-hander atop his five-player Cy Young Award ballot. He doesn’t expect the service time stipulation to impact whether he does so going forward.

Stone said some BBWAA members have opted out of voting for Rookie of the Year to avoid the potential conflicts of interest. Although The Baltimore Sun’s Orioles reporters are members of the BBWAA, it has long been the paper’s policy that they not participate in the organization’s award or Hall of Fame voting.

In adding this element to award voting, the MLBPA was seeking to curb so-called service time manipulation, where teams intentionally kept players in the minors longer than necessary to avoid them reaching a full year of service time. The most egregious case came in 2015, when the Chicago Cubs kept Kris Bryant in Triple-A one day past the date required for him to get a full year.

In addition to awarding players with a year of service time if they perform well after a delayed debut via Rookie of the Year voting, the new CBA also tries to encourage teams to have their top prospects on their opening day rosters. If a top prospect starts the season in the majors, spends enough of the year there and does well in award voting early in his career — again involving the BBWAA in the process — that team could receive extra draft picks. The Orioles have positioned themselves for that possibility next year with infielder Gunnar Henderson, holding the sport’s No. 1 prospect in the minors long enough this year that he maintains rookie eligibility into 2023.

Regardless of what Rookie of the Year voting does for Rutschman, he and the Orioles could render the situation moot by reaching an agreement on a long-term contract that goes at least through the 2028 season. The Atlanta Braves signed outfielder Michael Harris II, a strong contender to be the National League Rookie of the Year, to an eight-year, $72 million deal in August that negated voting needing to determine his timeline for free agency.

But until such an agreement is in place for Rutschman, how long the Orioles have him under team control will be in the hands of 30 baseball writers.

The Orioles will play their final three games of the season, hosting the Toronto Blue Jays. Although the series doesn’t have the playoff implications Baltimore hoped it would, there will be plenty to watch for.

Manager Brandon Hyde said Dean Kremer and Mike Baumann will start the first two games, but he wanted to consult Jordan Lyles before confirming the veteran right-hander would start the season’s final game. If Lyles does make that start, he would do so one inning and two strikeouts shy of his career highs.

Offensively, Cedric Mullins and Jorge Mateo enter the series tied for first in the AL in steals. It’ll be worth watching who comes away with the title. If they finish first and second, it’ll be the first time teammates have done so in either league since Montreal’s Marquis Grissom and Delino DeShields did so in 1992 and the first time in the AL since Kansas City’s Amos Otis and Freddie Patek in 1971. Mullins and Mateo also could join Elmer Flick and Harry Bay of the 1904 Cleveland Naps as the only pairs of teammates to tie for the league lead in steals.

The responsibility to face Judge one last time in the Bronx fell on right-hander Bryan Baker, and in some ways, there might not have been a better person to have on the mound if Hyde was looking to avoid history.

Last season for the Blue Jays’ Triple-A team, Baker allowed only one home run in more than 40 innings, and he carried that suppressive ability with him when Baltimore claimed him on waivers. Entering Sunday, only five pitchers who have thrown as many innings (66 2/3) have also surrendered three home runs or fewer.

Then, he struck out five, Judge included, in two perfect innings for his 10th straight scoreless appearance. The past five have also been hitless, positioning the 27-year-old well heading into the winter. But he would prefer different timing.

The Orioles losing three of four to the last-place Boston Red Sox squashed whatever playoff hopes they might have had left. The last two weeks saw their share of winnable games slip past Baltimore, with the club dropping two of three to a 100-loss Detroit Tigers team and losing consecutive heartbreakers to the Houston Astros before the disappointment in Boston.

Any season in which a team finishes as the best in its league to not make the playoffs will have its share of what-ifs. The Orioles’ September supplied plenty on its own.

Tuesday, the Orioles will recognize their yearly minor league award winners, with the hitting and pitching honorees speaking to the state of those players in the system.

Of Baltimore’s prospects with at least 400 minor league plate appearances, Brooks Robinson Player of the Year Jordan Westburg was the fifth best by weighted runs created plus, an all-encompassing offensive metric. He trailed Gunnar Henderson (Baseball America’s top overall minor leaguer), Colton Cowser, Connor Norby and Kyle Stowers with a still-impressive 127, with 100 being average. Including Hudson Haskin, the Orioles had six players with a wRC+ of more than 125, trailing only the Los Angeles Dodgers and Tampa Bay Rays and speaking to the organization’s stockpile of offensive talent.

Pitching also presented a difficult decision, though that was because there were many solid performers rather than standout ones. Jim Palmer Pitcher of the Year Ryan Watson ended up the winner, with the Orioles recognizing an unexpected breakout from a player signed as an undrafted free agent in 2020.

Watson ranked fourth in the system in innings, with the best ERA of the top nine in that category. Of that group, only Drew Rom and Jean Pinto ranked among Baltimore’s top 30 prospects according to Baseball America, with both in the back half. The Orioles haven’t invested much draft capital in pitching of late, leading to a group of interesting prospects without eye-popping statistics.