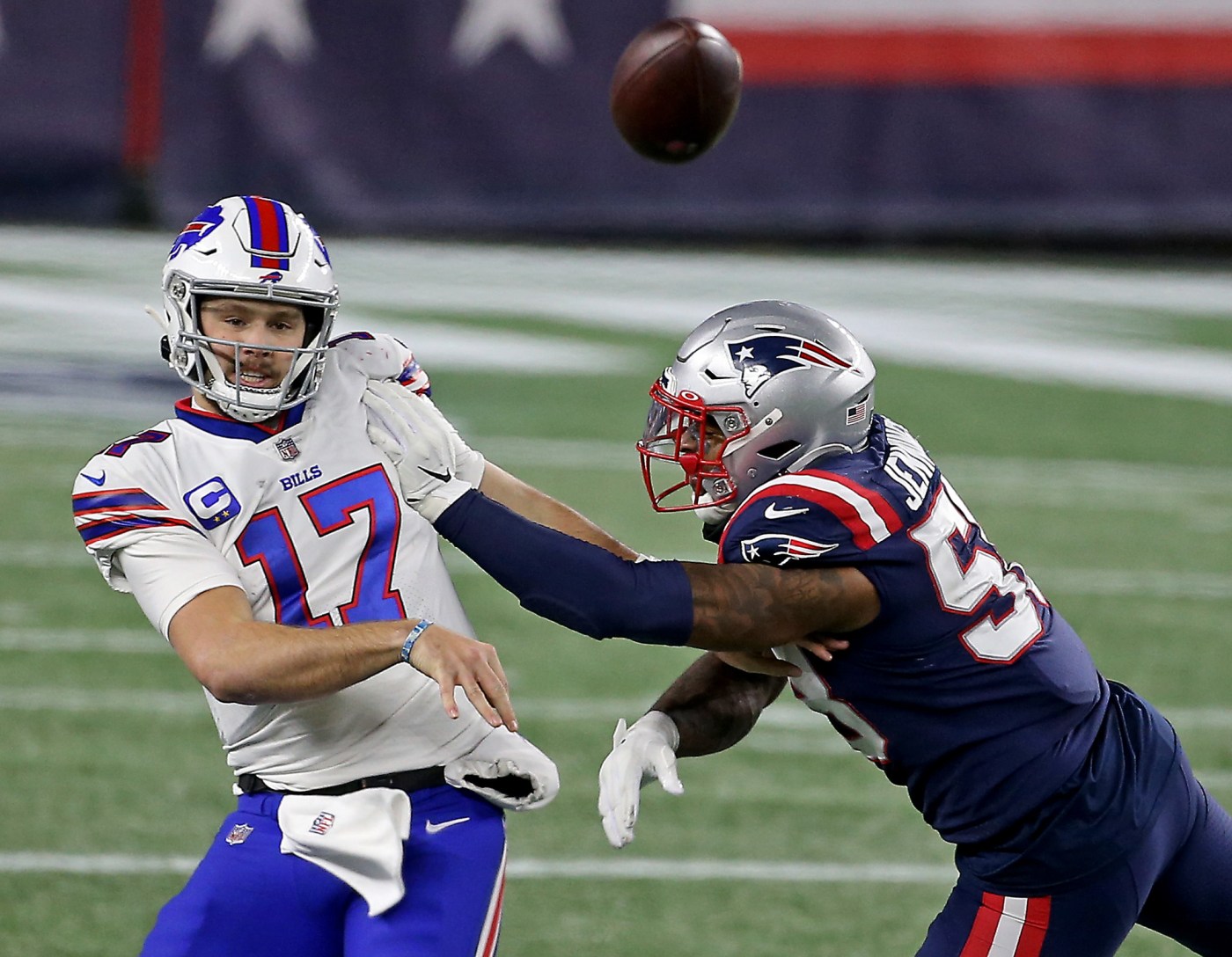 At this point, drawing up a game plan to stop Buffalo quarterback Josh Allen might feel downright foolish in Foxboro.

Allen and the Bills famously did not punt in their last two matchups with the Patriots, including a historic 47-17 blowout in the Wild Card round last January. Buffalo has won four of its last five meetings with the Pats. Allen isn’t even turning the ball over anymore, having thrown his last pick against Bill Belichick’s defense on Nov. 1, 2020.

So is Thursday a fait accompli?

Not exactly. Allen is not the same quarterback he was in January. Last month, threw five interceptions to four touchdowns while he dealt with an elbow injury. The Bills could not escape playing close games, not even against the Lions and Browns.

Statistically, they remain as dangerous as any offense in the NFL. But heading into Thursday’s kickoff, there are weaknesses. And aside from hoping Allen finally, just for once, throws them the ball like most quarterbacks are wont to to once or twice a game, the Patriots can follow a three-point plan to an upset.

Bills left tackle Dion Dawkins has been ruled out with an ankle injury, which not only opens up Allen’s blind side but sidelines Buffalo’s best offensive lineman.

Dawkins’ likely replacement, David Quessenberry, has allowed pressure on 7.5% of his pass-blocking snaps this season, according to Pro Football Focus. He should see plenty of Matt Judon, the NFL’s sack leader. When Judon isn’t threatening the left side of Buffalo’s O-line, he should find an even juicier matchup on the right side.

Second-year right tackle Spencer Brown has regressed hard this season, allowed three sacks and pressure on 8% of his pass-blocking snaps, per PFF. A few of Brown’s allowed pressures have led directly to turnovers from Allen, who’s thrown seven picks in his last five games.

Expect the Patriots to isolate Judon against both tackles through certain pre-snap alignments, where they occupy the nearest guard and/or running back to create a 1-on-1 matchup for their best pass rusher. Judon has also created several pressures through the use of two-man stunts, where he loops inside against an over-setting tackle. Look for Deatrich Wise and Josh Uche, the Pats’ two other top pass rushers, to create their fair share of pressure, as well.

The truth about containing Josh Allen is there’s no simple solution.

“He’s very dangerous out of the pocket, he’s dangerous in the pocket. So just team defense. Playing with our leverage, using our teammates help, them being where they need to be, being aggressive. He’s a hard guy to get and you can’t just stand there and watch him throw because he’ll throw it pretty good, too. So it’ll be a challenge for us,” he said.

One solution, particularly in passing situations, could be the use of a spy. Mack Wilson is the most athletic linebacker the Patriots have ever fielded against Allen, and he’s spied quarterbacks already this season. If Wilson is assigned to spy Allen, the Pats could feel more free to bounce between man and zone coverage, without worrying about turning their backs to Allen too often in man-to-man and risk a scramble.

The Patriots went so far this week as to say they’re treating Allen’s running ability as a greater threat than his arm. Allen leads the Bills in rushing and 88% of his scrambles have been successful this season. So, on passing downs, let Wilson worry about that and let the 10 other defenders take care of the rest.

The Patriots should learn their lesson from last week.

Vikings’ All-Pro receiver Justin Jefferson was allowed to make nine catches for 139 yards and a touchdown in a close Minnesota win. If Diggs is allowed to replicate that success, the Bills likely leave town with a victory.

Diggs has haunted the Patriots in recent years, overcoming the occasional double teams and the Pats’ top corners like Stephon Gilmore and J.C. Jackson. This time, the man-coverage task should fall to Jonathan Jones, who is enjoying a career year, but repeatedly got beat in Minnesota. Jones should receive regular help against Diggs, especially on third down and in the red zone.

After Allen, the Patriots cannot let the Bills’ second-best offensive player beat them.

“He’s good at everything,” Belichick said of Diggs this week. “Good with the ball in his hands, attacks the defense at all three levels, playing with a great quarterback. It’s a good combination.”