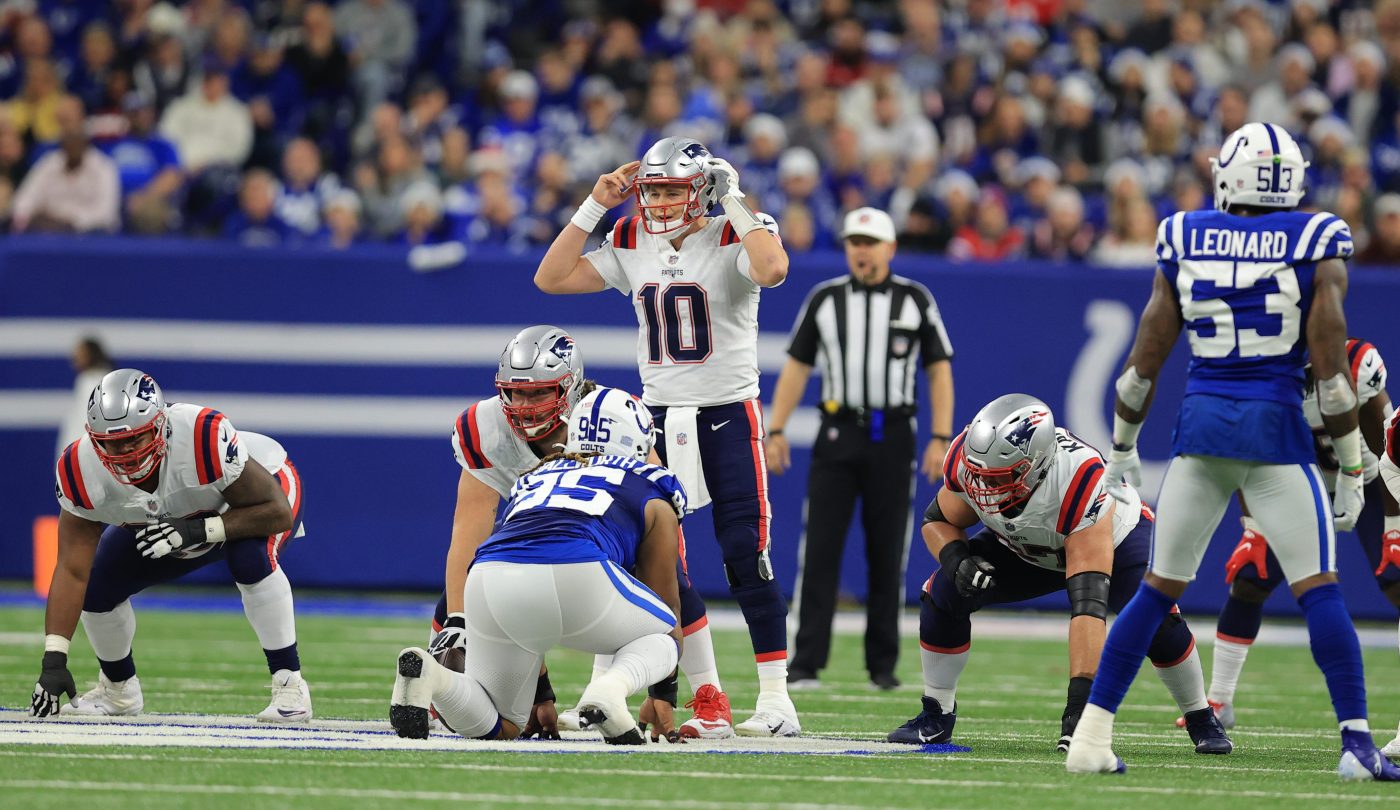 They hounded and hunted Jones. They forced turnovers. And they ultimately stunned the Pats in a 27-17 home win that snapped a seven-game winning streak.

While there will be no streak to snap Sunday, it would be a shock to see the Colts pull off another win at Foxboro. Indianapolis is running through a second-year quarterback in Sam Ehlinger, who began the year as their third-stringer. Defensively, they rank as a below-average team against the pass, even with former Pats cornerback Stephon Gilmore manning one side of the field.

Playing a simple Cover 3 scheme with lesser talent, the Colts fit the mold as a perfect stepping stone for Jones to return to form after a shaky performance versus the Jets last week.

Here’s how Jones can rebound and cruise into the bye week with the start of a new win streak:

The Patriots cannot afford to let Indianapolis pressure Jones like the Jets did last week. The good news is, most of that pressure is coming from one player: Buckner.

The 6-foot-7, 295-pound defensive tackle is a menace in the middle most often found across from an offensive guard. The Patriots should help rookie left guard Cole Strange against Buckner, especially since Strange is coming off his worst performance of the season with two holding penalties, one sack, a run stuff and a hurry allowed. On the season, Buckner has 24 pressures, including four sacks and six other QB hits, per Pro Football Focus.

Bill Belichick was full of praise for Buckner this week, calling him every bit as good as fellow All-Pro defensive tackles Aaron Donald and Cameron Heyward.

“He’s statistically right there, and he plays that way,” Belichick said. “He’s got a ton of production. A ton of tackles. Sacks, quarterback hits, batted balls, forced fumbles, you name it. He’s got it all.”

The Colts rank as a bottom-10 defense versus tight ends, per Football Outsiders’ opponent-and-situation-adjusted metric DVOA.

Last season against the Colts, Hunter Henry led all Patriots with six catches, 77 receiving yards and two touchdowns. Henry has been productive on a per-target basis this season, but hasn’t seen as many passes from Jones. It’s time for that to change.

No Colts defender should be able to contain Henry all game 1-on-1. Historically, Henry has also thrived at finding the soft spots in zone coverage, which the Colts play as much of as any defense in the league. Last season, Henry ranked sixth among tight ends in yards per route run against Cover 3.

Not far behind was Jonnu Smith, who ranked ninth among the 42 tight ends to see at least 10-plus targets versus that defense. Smith won’t find many catch-and-run opportunities versus one of the NFL’s best tackling defenses, but give him enough targets versus zone, and he should produce.

3. Stay away from Stephon Gilmore

At 32 years old, Gilmore is no longer the Defensive Player of the Year he became in New England.

Gilmore has allowed quarterbacks to complete just 54.5% of their passes and register a passer rating of 65.6 when throwing in his direction. He has one interception and four other pass breakups, including one deflection in the end zone that sealed a win at Denver. Since then, quarterbacks have thrown at him less frequently. From Weeks 1-5, Gilmore saw 6.4 targets per game, an average that’s dropped to five targets over the last three weeks.

“You can tell they’re putting him out there, and he’s locking down the guys, covering them 1-on-1,” Jones said this week. “He’s still a premier cornerback. I have all the respect in the world for him.”

As for the Patriots, without DeVante Parker they’ll be at a disadvantage out wide. Their best bet remains Jakobi Meyers in the slot and Henry and Smith over the middle.

Feel free to re-connect and catch up with Gilmore post-game. But until then, steer clear.