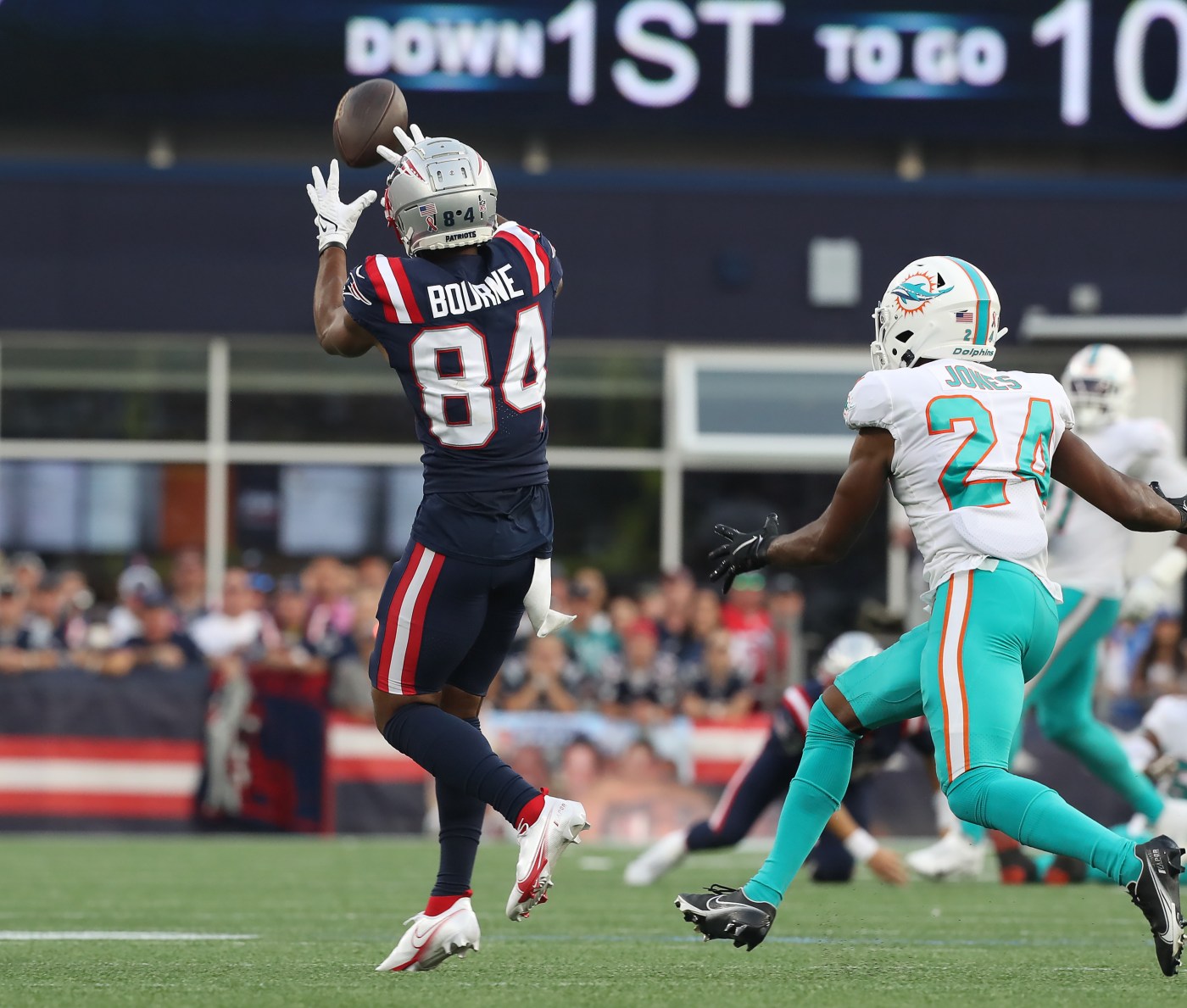 Jones faced the highest rate of man-to-man coverage among starters, according to Sports Info. Solutions; a stat that screams one thing: prove it.

Prove you’re as accurate as advertised, kid. To his receivers, prove you can separate. And to the Pats offense as a whole, prove you can win 1-on-1. No tricks, no deception, no special schemes.

Against man coverage, Jones’ completion percentage dropped 10 points, and his passer rating sunk to 79.2, good for 19th among the 27 quarterbacks who attempted at least 100 passes versus man-to-man. Jones was also pressured on 34.8% of his dropbacks, as opponents blitzed him like he was playing on a bum wheel with one eye closed.

Defensive coordinators were happy to apply pressure, too. The Colts, who finished with one of the NFL’s lowest blitz rates last year at 20.2%, sent extra rushers on almost one-third of Jones’ dropbacks in a late-season win. Then the zone-heavy Bills ditched their preferred coverage formula to pound Jones and Co. the next week and later in January. Sandwiched between those Buffalo defeats was another division blow dealt by the Dolphins, who won the regular-season finale, 33-24.

Now, the Pats are feeling the heat again in South Florida, where they’ve begun practicing for Sunday’s opener. And heat won’t be limited to the weather. The Dolphins are coming again for Jones — and in large numbers.

“They’re one of the teams that plays one of the highest percentages of man-to-man coverage in the league. Certainly not all man, but they play a high percentage of it — higher than most — and they blitz, particularly their secondary players,” Patriots coach Bill Belichick said Tuesday. “But in general, (they) blitz more than most teams do. They pressure the quarterback.”

The upside of that stress is Miami, which ranked second with a 39.6% blitz rate last season, should force the Patriots to finally tip their reshuffled hand. No more nebulous talk of what the new offense could or should look like. No more preseason games of keep away. (The Pats played their starters for seven vanilla drives this summer, sprinkled in just three RPOs — a new feature — and hardly shuffled their personnel mid-series).

It’s time for answers, specifically against man coverage and the blitz.

So how do you unstick from tight man-to-man? Start pre-snap with tight splits.

A la the reigning champion Rams, expect the Patriots to align their receivers closer to the middle of the field, where they can run right, left or straight upfield. That immediately unlocks a level of unpredictability that aligning out wide and up against the sideline can’t provide. Tight splits can also create instant traffic for defenders, who must either duck under or swim over intersecting crossing routes.

In August, Jones confirmed the Pats will be employing more of these tight formations.

“I think different teams around the league use tight bunches, and a lot of times it’s for their advantage. We’re trying to do that a little bit more,” he said. “There’s different plays you can run out of them, so anything that’s different can help confuse the defense.”

So how do you beat the blitz?

Complement your well-oiled quick passing attack and better protection with an RPO package that should also prevent the offense from running into bad looks. These plays develop rapidly, with the quarterback reading a pre-identified defender whose actions dictate whether he should make a handoff or quick throw; typically to a receiver running a slant, bubble screen, skinny post or stop route.

Or maybe even a 50-50 ball down the sideline, considering the Patriots’ new offense wants to emphasize the deep passing game. And if that pass is picked off, so be it. Call it an arm punt.

Because Dolphins cornerback Xavien Howard winning a jump ball over old friend DeVante Parker 30 yards downfield sure as hell beats him intercepting an out route and sprinting it back for a touchdown, just like he did to start last year’s regular-season finale. That loss was one of many that underscored the Patriots offense had to adapt to survive this offseason. (Not to mention, averaging fewer than 20 points per game and throwing just six passing touchdowns versus Buffalo since Bills coach Sean McDermott took over in 2017.)

Sunday will offer the first true glimpse of how the Pats intend to solve their biggest offensive problems. Not only because the game counts, but because of how Miami is uniquely built to pressure them like everyone did last year, only better.

“Just got to see it coming and execute what we’ve been working on in practice,” Parker said Wednesday. “That’s the biggest thing.”