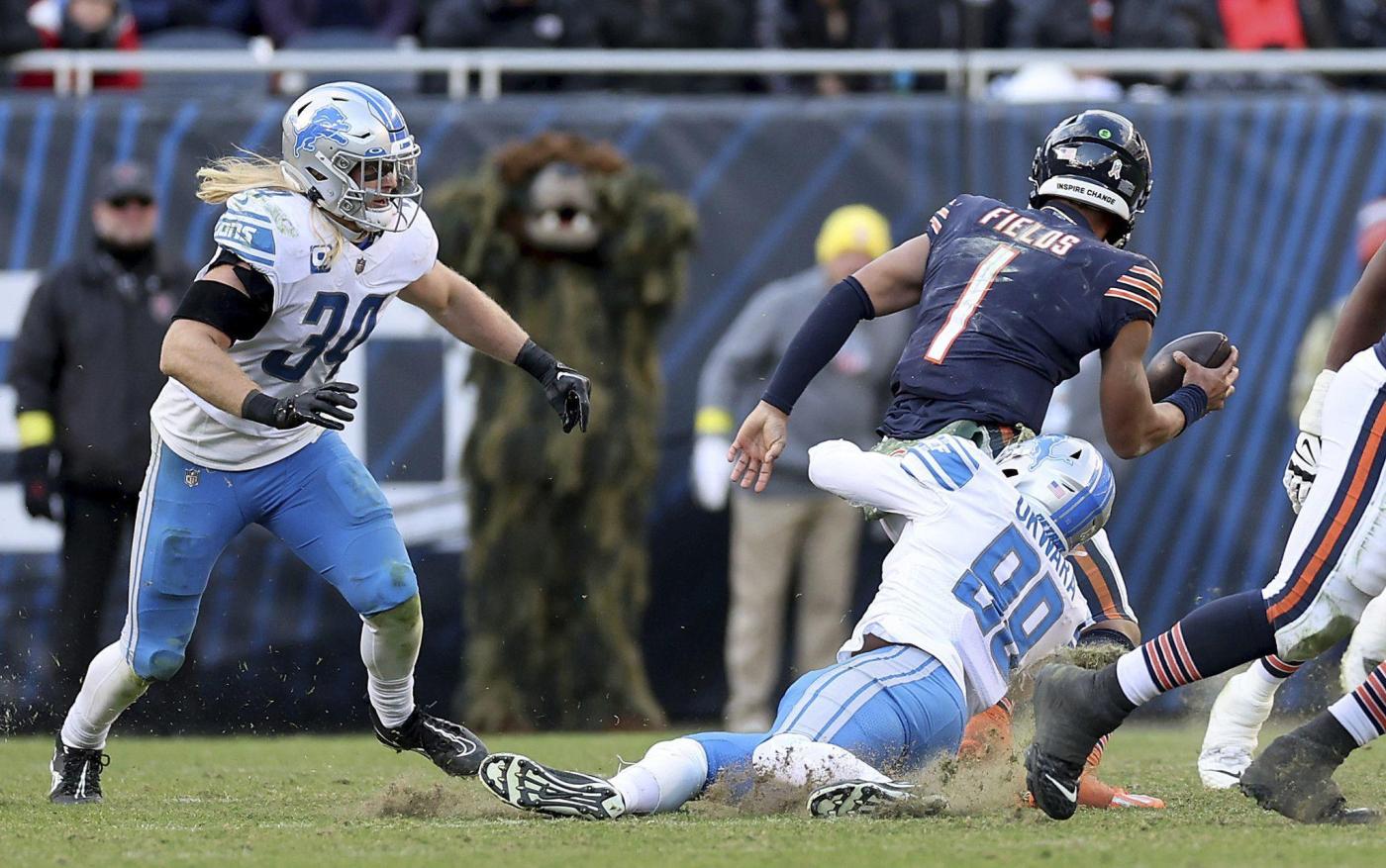 Chicago Bears quarterback Justin Fields took the first question in his postgame news conference Sunday at Soldier Field and immediately made a promise.

That pick-six he threw to Detroit Lions cornerback Jeff Okudah? The one he tried to float to Cole Kmet while being pressured by two Lions defenders? The one that helped the Lions stage a fourth-quarter comeback for a 31-30 victory?

“I can assure you that will never happen again for the rest of my career,” Fields said. “I’ve just got to dirt it and play the next play.”

Fields’ throw, which Okudah returned 20 yards for a touchdown, was one of the most glaring mistakes of the second half. But Fields was far from the only Bears player to walk away from their third straight loss with a regrettable play.

A litany of errors in all phases had the Bears feeling like they gave away an easy win.

“We have to overcome adversity when it’s put our way, and that could come in a lot of different fashions, a lot of different ways,” Bears coach Matt Eberflus said. “It could be a call here, a call there. It could be an interception that we might throw. Whatever those adversities are, we have to do a good job of resetting and then making the plays at the end to win the game.

“That’s about growth for us. It’s about a mindset, and the guys know that and are determined to do that.”

But the costliest calls came during one Lions drive in the fourth quarter, starting with a holding call on long snapper Patrick Scales on a Bears punt. Rookie cornerback Kyler Gordon was called for unnecessary roughness for a late hit while quarterback Jared Goff was going out of bounds. And cornerback Jaylon Johnson was twice called for illegal use of hands, the second one negating linebacker Jack Sanborn’s interception.

The Lions scored on D’Andre Swift’s 9-yard touchdown run one play later to cut the Bears lead to 24-17.

Johnson declined to speak to reporters after the game through a Bears representative, who said Johnson likely would talk to the media at a Monday news conference instead. So it wasn’t fully clear what happened on the second play.

More than one Bears player wondered about some of the penalties that were called. But they also acknowledged the need to rebound from them.

“We already know how the calls go,” safety Eddie Jackson said. “We can’t do nothing about that. We’ve just got to stay disciplined and do our jobs.

“I feel like some of the calls were kind of BS. But again, you’ve got to leave no doubt. You’ve got to come in and do what we have to do, don’t put ourselves in those type of situations, especially when we’ve got a 14-point lead.”

After Fields’ interception, he seemed to reclaim momentum with a jaw-dropping 67-yard touchdown run. But when Santos lined up for the extra point, the football left his foot and bent to the left, giving the Bears only a six-point lead.

Santos said he needed to watch the film to figure out what went wrong.

“How the ball flew, something tells me (it was) something in the operation, and it comes down to me just trusting everything and going through it,” Santos said. “It didn’t come off right. That’s not how we operate. So I just have to look at what happened, (look at) myself and make the correction.”

Film correction also will have to address how Lions wide receiver Tom Kennedy got so far between Johnson and Jackson on third-and-8 to allow Goff to hit him with a 44-yard pass.

Two plays later, the Lions scored the winning touchdown on Jamaal Williams’ 1-yard run, and the Bears and Fields couldn’t deliver on their final drive.

“We can’t keep shooting ourselves in the foot,” Jackson said. “I’m just tired of getting up here and saying the same thing every week. It’s just becoming repetitive. We’ve got to do what we’ve got to do.”

Kmet said the game reminded him of the last time the Lions beat the Bears in Chicago on Dec. 6, 2020 — the Lions’ last road win against anyone before Sunday.

In that game, the Bears had a 10-point lead early in the fourth quarter but frittered it away. Mitch Trubisky fumbled in the final two minutes, setting up the Lions’ winning 7-yard touchdown drive. And the Bears offense couldn’t capitalize on one final chance.

This Bears team, in a clearly rebuilding season, has different expectations than that one did. But even if this is a season of development for many, players still want the feeling of seizing an opportunity for a win when it’s presented — rather than throwing it away with mistakes.

“We understand where this is going here obviously, but you want to build a big-picture thing? You’ve got to win some games,” Kmet said. “So you’ve got to get that feeling and understand how to do it.

“When we’re able to break through this thing and figure it out and be able to execute late in the game, it’s going to be really good for us going forward.”