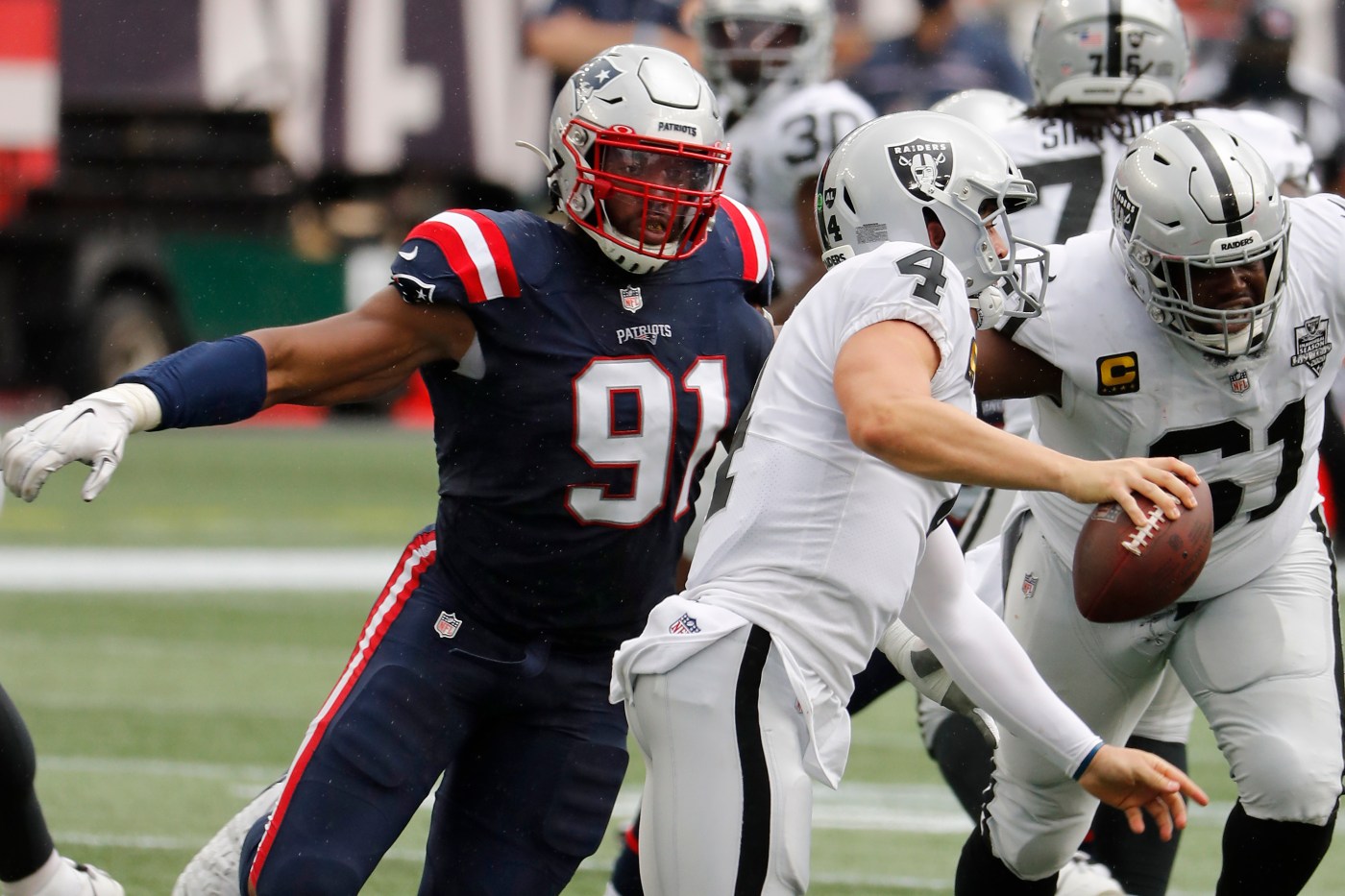 The Patriots will match wits with former offensive coordinator Josh McDaniels on Sunday, his offense scheming against their top-10 defense. Both units fancy themselves as game plan-oriented, meaning they execute new wrinkles each week to stifle their opponent. So what can the Patriots do against a shape-shifting Raiders offense led by a coach who knows them so well?

For starters, show McDaniels something he hasn’t seen yet

The Patriots can confuse quarterback Derek Carr with new safe pressures, those that rush four while dropping one player off the line of scrimmage and blitzing a linebacker or safety in his place. The Pats have expanded their use of these “simulated pressures” this season, exploiting offenses that design protections to stop Matt Judon or Josh Uche, who then drop into zone coverage and foil those schemes.

Look for both players to be central figures in Bill Belichick’s plan to out-maneuver his old lieutenant Sunday. Beyond Judon and Uche’s impact, here’s how the Pats defense can pave the path to victory in Sin City.

It would have been perfectly reasonable to expect the Patriots to double-team DeAndre Hopkins in Arizona, after Belichick said he was as good as any receiver he’s ever coached against.

And yet, those doubles were few and far between. Instead, to reverse their recent trend of getting torched by No. 1 wide receivers, the Pats played a season-high rate of zone coverage at 87%. While Hopkins caught seven passes for 79 yards, most of those gains were empty calories in a game the Patriots never lost control of.

Against Adams, Belichick should copy and paste much of that coverage plan. Adams is an overwhelming matchup problem for any of the Pats cornerbacks, and man-to-man coverage will leave the defense susceptible against him or one of the Raiders’ other top weapons. The occasional double, particularly on third down and in the red zone, makes sense, but the Pats are best off sitting back in disguised two-deep coverages that tilt toward Adams.

If the Pats keep a lid on his production, they should win.

2. Attack the guards in pass protection

Back to Judon and Uche.

As often as they’ve terrorized offensive tackles rushing off the edge, both players have enjoyed immense success looping inside on two-man stunts. There, they can exploit the worst pass protectors on the Raiders’ offensive line.

Rookie left guard Dylan Parham has allowed a team-worst 40 pressures, per Pro Football Focus, and was limited in practice this week. Right guard Alex Bars is right behind him at 26 pressures allowed, including three sacks and seven quarterback hits. Bars missed practice time this week, and his backup would theoretically offer an even faster path to pressure on Carr.

The Patriots also might be happy isolating one of their interior rushers against these guards. Defensive tackle Daniel Ekuale powered his way to a sack in Arizona, where Davon Godchaux tallied two hurries. Second-year defensive tackle Christian Barmore also returned to practice this week.

OK, so the Patriots have neutralized the Raiders’ strength (Adams) and attacked their weaknesses (interior pass protection). What’s left?

Jacobs has arguably been the NFL’s best runner this season, a tackle-breaking machine who can pull away for long touchdown runs. If the Pats can win the battle in the trenches, Jacobs shouldn’t find much running room — so long as they bring him to the ground.

“Strong, tough kid to tackle, has got good contact balance. Very powerful guy, has good patience, sees the hole, sees lanes and as we saw, has breakaway speed,” Belichick said. “He’s been able to go the distance and create some explosive runs, not just five and six yarders but he’s had some home runs, too. He’s got that kind of ability, runs inside, runs outside, and has good vision.”

Stopping Jacobs should also mitigate the Raiders’ use of play-action passing, a staple under McDaniels.