How the Patriots, AFC East shape up post trading deadline 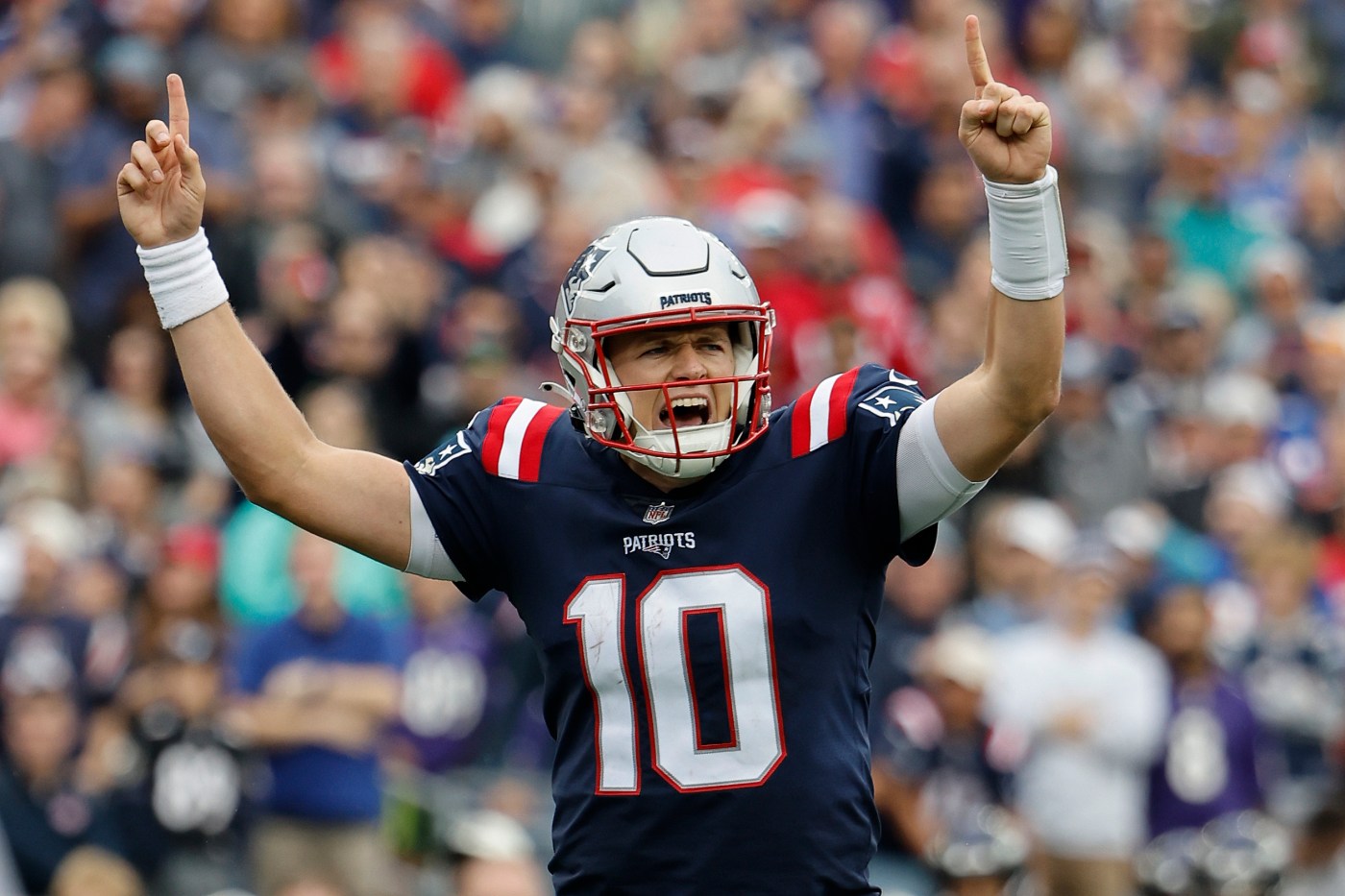 Unlike the AFC West, which has turned out to be a paper tiger, the AFC East looks like a legitimate beast midway through the season.

During the past few decades and change, the division has typically been a one-team show, whether it was the Patriots for much of the time, or the Bills more recently.

This year, there could be as many as three teams from the division that make it to the postseason, starting with the Bills.

They are arguably the best team in football. They’re in Super Bowl or bust mode and have pretty much lived up to the label.

They’re a wild card entry at the moment.

And when Tua Tagovailoa is under center, feeding all the talent around him, they have yet to lose this season (5-0).

The perennial cellar-dwellers have pulled themselves out of the basement, and have a young, promising group led by the defense. The Patriots exposed quarterback Zach Wilson a week ago at the Meadowlands.

He could prove their fatal flaw, but they’re still going to win their share of games down the stretch with their defense alone. They also hold a wild card spot at the moment.

The Patriots, currently in last place in the division?

They were a wild card team a year ago, but aren’t currently in the playoff mix heading into Week 9. At 4-4, though, they could still slide in, especially if Mac Jones pulls it together and at the very least plays more like the quarterback he was a year ago at this time.

“Other than the NFC East, name me a better division?” ESPN analyst Damien Woody said of the AFC East recently.

At the outset, we were all salivating at the thought of all the teams in the AFC West, with all the top quarterbacks and firepower.

But that division has pretty much been a bust outside of Kansas City.

“A lot of people thought Kansas City was vulnerable this year,” CBS analyst Charles Davis said when reached Wednesday. “They’re still the one left standing out there. They’re the one you can count on.”

In terms of the AFC East, it wasn’t outlandish to believe teams would improve, namely the Dolphins and Jets, but certainly not to this degree.

“We thought some teams might jump up, but we weren’t sure. We knew Buffalo was the clear favorite. But who was going to join them?” said Davis. “Well, guess what? The entire division has decided to try to join them. So that part’s good.”

With Buffalo, Kansas City, Baltimore and Tennessee at the top of their respective divisions, Miami, the New York Jets and Los Angeles Chargers currently hold down the three wild card spots.

But that could drastically change over the course of the final two months.

“After Buffalo, it’s wide open who the other two teams might be in the division,” Davis said of the AFC East possibilities. “Right now, I’d give the advantage to Miami, because they’re the most explosive of the three on offense.”

That said, following Tuesday’s trade deadline, how does it look the rest of the way for the teams in the AFC East?

Let’s break it down:

Outlook: They enter Week 9 with the NFL’s stingiest scoring defense, allowing just 14.0 points per game, and an offense that’s ranked No. 2 in points scored per game (29.0).

And they have Josh Allen, an MVP candidate, at quarterback. It’s hard to beat that combination.

“Buffalo is the team to beat,” said Woody. “Josh Allen is playing out of his mind. They have a really good defense. They’re the best team in the league.”

If there was one area that needed a bump, it was running back. Acquiring Hines was a shrewd move. He’ll likely be used as a third-down back. He’s pulled in 235 receptions in 72 career games.

The Bills are also expected to get their top corner Tre’Davious White back soon. He’s just about ready to return from ACL surgery.

And another blockbuster move might be on the horizon as the Bills have frequently been mentioned as a landing spot for wide receiver Odell Beckham Jr., who is a free agent, and expected to return from ACL surgery in December.

Bills GM Brandon Beane even acknowledged possibly having a hat in the ring for OBJ’s services.

In any case, it’s hard to beat what they already have across the board.

Outlook: Based on the moves and urgency they showed at the deadline, the Dolphins must feel like they can make a meaningful playoff run. Adding to the equation is the fact the Fins haven’t won a playoff game since 2000, which happens to be the longest drought among AFC East teams.

While the offense has shown to be capable of putting up points, the Dolphins felt the missing piece was on defense. Their pass rush wasn’t lethal enough, so they acquired Chubb from the Denver Broncos in a deal that included multiple players and draft picks. Chubb is one of the better home-wreckers in the league. He already has 5.5 sacks this season.

Even with Chubb, and Wilson, who was added for depth at running back, it’s still tough believing they’ll leap over the Bills and win the division. At the very least, they’ve bolstered their chances to nail down a wild card berth.

“I would say I have full belief that we are capable (of winning a Super Bowl).”

Outlook: They were riding high until running into the Patriots last Sunday. More to the point, they were doing fine until Zach Wilson was exposed by Bill Belichick’s defense.

The second-year quarterback has got all the arm talent in the world, but can’t stop himself from throwing up miracle balls that have little to no chance. His three picks led to a Patriots win last week.

He said during the week he learned from the experience, all of which remains to be seen.

“In that game, even in desperation mode, I can’t be forcing the ball like that,” Wilson told reporters. “We have a great defense and I’ve got to keep relying on them, allow them to put us in a good situation on offense.’’

As Davis said, the Jets had a chance to announce themselves as a legitimate threat by beating the Patriots, but didn’t get the job done thanks in part to Wilson.

“Losing Hall was a pretty big hit. That dude could take it to the house on any given play,” said Woody. “If he didn’t get hurt, he was probably going to be the offensive rookie of the year.”

While Robinson isn’t a game-breaker, he provides good depth at the position and is a quality pass-catcher out of the backfield.

On the plus side, Gang Green’s defense is very good, and should keep Robert Saleh’s team in every game, and in the hunt for a wild card spot.

Outlook: Back in March, Patriots owner Robert Kraft voiced his displeasure at not having won a playoff game since 2018. He was bothered at no longer holding the contender label.

While the Pats got in last year behind then rookie Jones, they were blown out by the Bills in their wild card game.

Will they even get in this year? That’s the million dollar question.

There were no moves made to bolster their chances. So Belichick is rolling with what he has.

The defense has run a bit hot and cold, but has been good for the most part if you take away the performances against mobile quarterbacks.

Like last year, Matthew Judon has been a force as a pass rusher and disrupter, as he’s currently tied for the league-lead in sacks with 8.5. Deatrich Wise has also emerged up front.

The offense? Or rather, the new offense?

Still a work in progress. Jones missing three games with a high ankle sprain didn’t help, but going back to some of the tenets of the old offense with Bailey Zappe under center proved beneficial.

With Jones now back in the saddle, it’s going to be interesting to see if he can progress, and, at the very least, get back to the form he showed last season.

There isn’t much question that the transition has been tough with a new offense, and with new coaches (Matt Patricia, Joe Judge) leading the group, who had no prior experience running an offense.

Does that mean the Pats won’t get in? Not necessarily. But Jones is clearly needs to play better for the Patriots to have a chance.

On the plus side, Rhamondre Stevenson is having a breakout year as a runner and pass-catching back. Wide receiver Jakobi Meyers continues to be money on third down.

The Patriots simply need more from the rest to give themselves a shot.