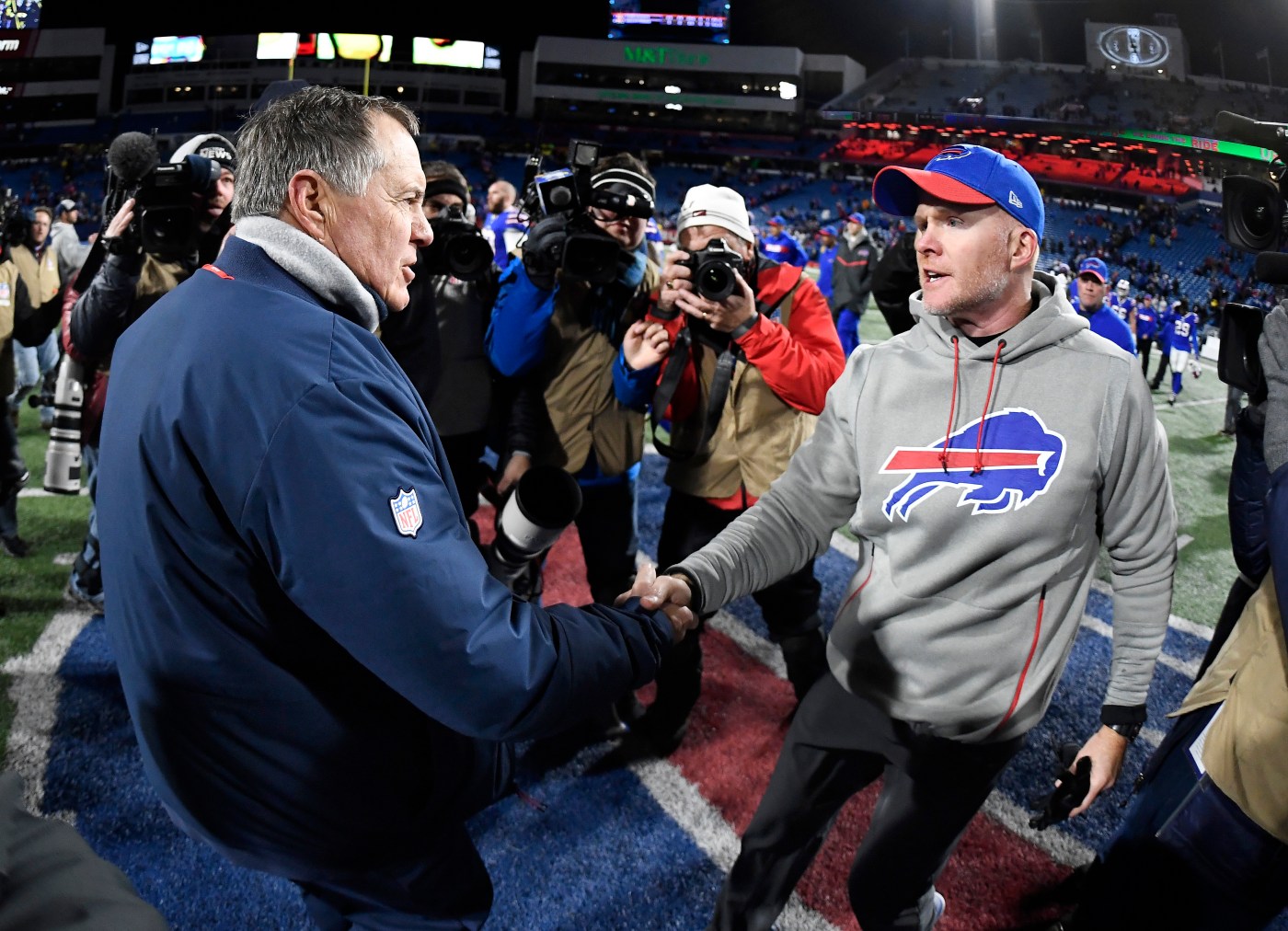 FOXBORO — In their final game last season, the Patriots showed their remaining cards against a division opponent that played like it had stacked the deck.

The result, of course, was an infamous 47-17 blowout loss at Buffalo. Eleven months later, most of the Patriots’ and Bills’ players from that night are back. The same can be said, more or less, for the coaches.

So what cards does Bill Belichick have left to avoid a repeat embarrassment Thursday night?

Buffalo has not changed its defensive structure and zone-heavy scheme since head coach Sean McDermott took over in 2017. McDermott’s defense has especially stifled the Patriots, even in the Tom Brady years. The Pats average fewer than 20 offensive points per game against McDermott’s Bills, and haven’t scored more than 25 since 2017.

“Schematically it’s pretty similar from week-to-week, year-to-year,” Belichick said this week. “I mean they obviously tweak it by game plan, do a little more of this against one team or a little more of that against somebody else. But they don’t really change what they do.”

As the talent pool in the Patriots’ wide receiver room has dried up over the years, the Bills’ secondary has grown deeper, which has allowed them to play an atypically high rate of man-to-man with great success.

Up front, the Patriots have historically wanted Buffalo to play 1-on-1. The Pats hammered the Bills with a variety of man-blocked runs in their only series win of the past two years, a 14-10 triumph last season in a windstorm. But in the ensuing rematches, Buffalo’s defensive front — which was and remains loaded with first-round talent — stood its ground.

“The last two games, they out-physicaled us,” said right guard Mike Onwenu. “So it’s our challenge to step up to.”

The good news for Onwenu and Co. is the Bills are now vulnerable against those types of runs, like power and counter, which can often be identified when an offensive guard pulls. According to Sports Info. Solutions, the Bills are allowing 5.4 yards per carry versus man-blocked schemes power, counter, trap and duo, the eighth-highest average in the league. Expect more of the same Thursday.

Defensively, the Patriots have openly discussed this week treating Josh Allen as a runner and passer second.

The Patriots’ Josh Allen problem has only one solution

“We have to work together up front to keep him in front of us, force him to be a passer,” said leading pass rusher Matt Judon. “He’s a very dangerous passer, but I think we’ll stay with that instead of him running all over us.”

Allen rushed for 149 yards against the Patriots last season, gouging them at 6.2 yards per carry on a mix of scrambles and designed runs. Keeping Allen in front should also prevent him from extending plays and improvising, his greatest weapon against Bill Belichick’s meticulously planned and prepared defense last year. Pats safety Adrian Phillips noted the defense was too often caught out of position, leaving escape hatches for Allen when he was under pressure and open receivers downfield.

“He was in an unbelievable mode last year, but at the same time, we did some stuff that was very uncharacteristic of us and it played into his hands,” Phillips said. “And he’s a great player, so he took advantage of it.”

Phillips also insisted the Patriots discovered a few effective tactics against Allen, despite the fact Buffalo did not punt once in the teams’ last two meetings. Phillips said the Patriots intended to repeat those calls and disguise them, which should require bailing from blitz looks or safeties darting to or away from the line of scrimmage at the snap. The hope is to fool him into committing a turnover.

Allen hasn’t thrown an interception against the Patriots since Nov. 1, 2020.

Elsewhere, after getting smoked for 139 yards by Vikings All-Pro wideout Justin Jefferson, it reasons the Patriots will pay extra attention to Bills receiver Stefon Diggs, a fellow All-Pro. Diggs has roasted the Pats over his career, averaging more than six catches and 84 yards per game, while scoring five touchdowns in six meetings. Early in the week, Patriots linebackers coach Jerod Mayo left no doubt about how the coaching staff sees Diggs’ importance to Buffalo’s offense.

“It all runs through the quarterback and also through (Stefon) Diggs,” Mayo said.

Added Belichick: “(Diggs)’s good at everything.”

And yet for all the Patriots’ potential scheming and plotting to avoid a repeat of last January, Thursday will come down to the physical. Winning 1-on-1 battles, pushing Allen’s offensive line around and pulling him to the ground when opportunities arise.

Because after failing to force a single punt in their last two meetings last season, even with the greatest defensive coach of all time commanding their sideline, the Patriots know this:

“Division games are more (about) players gotta go make plays,” Meyers said. “They know what we do, and we know what they do.”

Cards down. Game on.