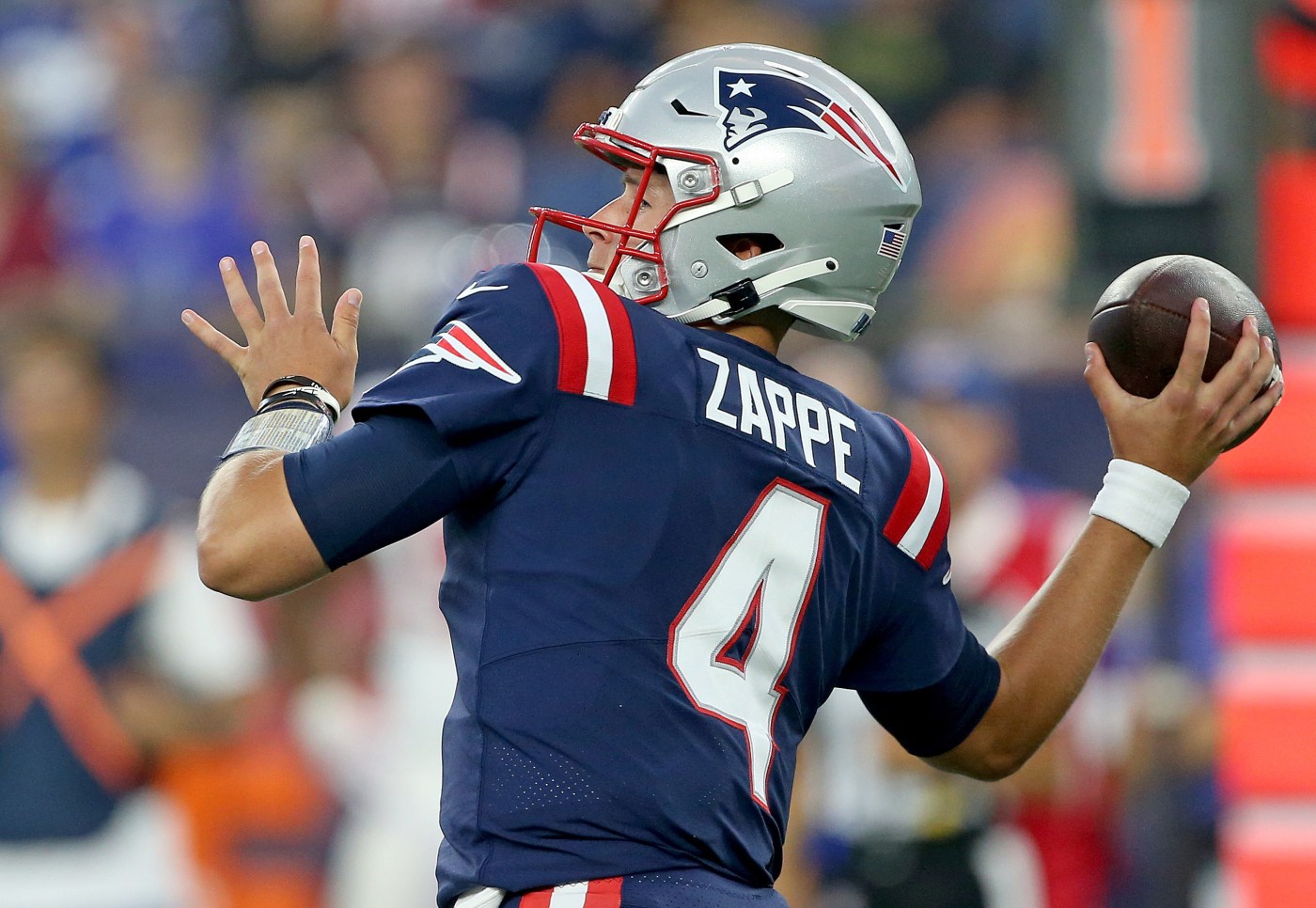 Going to battle against the NFL’s top-ranked scoring offense with a fourth-round rookie quarterback would generally spell certain doom on Sunday.

And yet every day ahead of this weekend’s kickoff with the league-leading Lions, the Patriots were slated as home favorites. Why?

Because Detroit, while talented and threatening and unusually capable this season, also owns the NFL’s worst defense. The Lions rank dead last by points allowed, Football Outsiders’ opponent-and-situation-adjusted metric DVOA, and bottom five at Pro Football Focus. Opponents have run and passed on them with little resistance.

So yes, even Bailey Zappe or a hobbled version of Mac Jones can reverse course on a 1-3 season by going through Detroit on Sunday.

1. Pound the rock outside

The Patriots’ running game took the gloves off last week, pounding out 167 rushing yards and the offense’s first back-to-back touchdown drives of the season at Green Bay. Damien Harris and Co. shouldn’t put the gloves back on now.

The Lions are allowing 5.6 yards per carry, worst of any defense in the NFL. Half of their eight highest-graded run defenders at Pro Football Focus are defensive backs. Their top defensive linemen are all pass-first players: Charles Harris, Aidan Hutchinson and Julian Okwara.

Meanwhile, the Patriots own the league’s No. 1 rushing attack by DVOA. They’ve thrived by attacking off-tackle, exactly where the Lions are weakest. Look for offensive play-caller Matt Patricia to dial up power runs, crack tosses and outside zone hand-offs, then counters off of those to punish an often over-pursuing defense. Linebackers Alex Anzalone and Malcolm Rodriguez have already combined to miss 19 tackles this season.

Eventually, the Patriots will face obvious passing downs against Detroit, times when they will likely use screens or simple concepts to protect their quarterback.

But the object Sunday should be to eliminate as many of those third-and-medium or third-and-long scenarios as possible. So, pass before you must.

Last week, all of Zappe’s best throws came off play-action, including his 25-yard touchdown to DeVante Parker and a 21-yarder to Nelson Agholor. Overall, the Patriots are averaging four more passing yards per attempt off of play-action than standard dropbacks. The threat of a run fake should have even greater power over a defense like Detroit’s, which knows the Pats will be coming for its fatal flaw.

So around a steady diet of handoffs to Harris and Rhamondre Stevenson, throw in a few fakes to help Zappe out, too.

If the Lions somehow strike first on defense with a sack or turnover, you can bet it will be on a blitz.

Through Week 4, Detroit owns the third-highest blitz rate in the league at 37.6%. The Lions routinely roll the dice and put starting cornerbacks Jeff Okudah and Amani Oruwariye on islands. Their bet is the pass rush will get home before either corner is exposed downfield by a bad matchup.

If they don’t attack outside, the Patriots should have favorable 1-on-1 matchups to hunt in the slot or at tight end. The key will be identifying where the blitz is coming from pre-snap, so they can dam it up and eventually get the ball out before it’s too late.

“We’ve gotta make sure me and (Zappe) are on the same page, seeing it the same way,” Pats center David Andrews said this week. “(Detroit’s) kind of a spin-the-wheel blitz team, too. Kind of everyone’s coming.”

“Very aggressive team. A lot of pressure. It’s probably as much or in the ballpark as Miami from a percentage standpoint. They bring a lot of people,” Bill Belichick said. “Secondary players, linebackers, and things like that. They’re fast. They pursue well. Good, aggressive football team.”