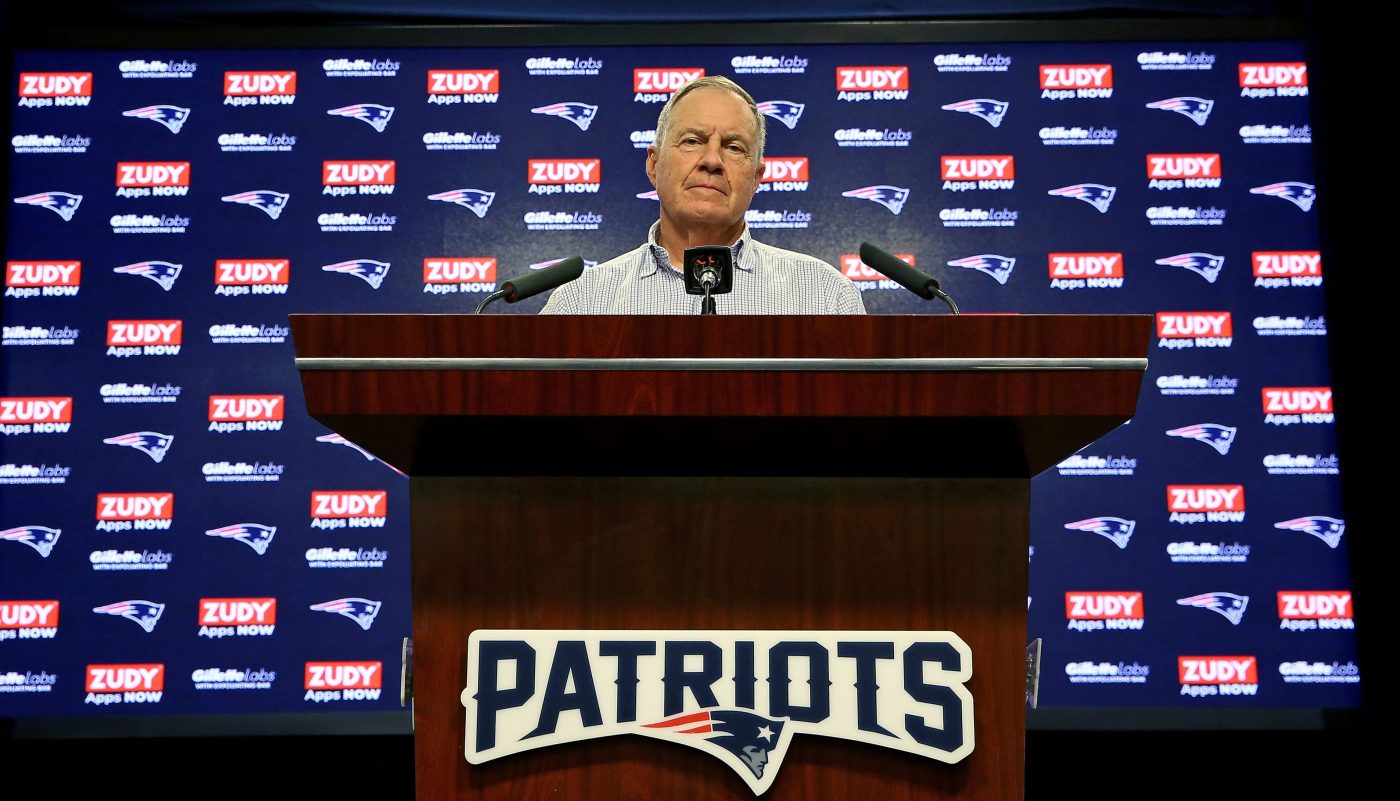 Before the turkey makes its rounds, with mashed potatoes, football and a nap to follow, Thanksgiving kicks off with family time.

Time to to catch up. Time to engage in occasionally awkward small talk. Time for crazy Uncle Bob to swagger over, beer in hand, and uncork a highly personal question with all the grace of the Butt Fumble.

When are you going to get married and have kids?

So, how do you answer?

By channeling Bill Belichick, of course, master of the microphone. But spare Uncle Bob the sneers, snorts, sarcasm and glares that have made Belichick’s press conferences famous.

Stick to his rules, those that have invisibly shaped the answers he and his players have given for 22 seasons.

While it’s true every NFL team adheres to a media policy, Belichick is unique in that he handcrafted most of the Patriots’ rules himself and elevated their place within his program. In more than a dozen interviews with the Herald, currnt and former Patriots players universally agreed the organization cares more about media relations than any other team they played for. For example, Belichick will display players’ quotes to reporters in team meetings if they’ve transgressed and lambast them, just like he spotlights bad plays on film.

Additionally, four of Belichick’s media rules are inscribed on a sign players and coaches pass every single day, reminders of how to speak and act outside of the facility. Those four rules, among others, are listed below with players’ advice on how fans can apply them in everyday life. Such as, verbally stiff-arming sweet Uncle Bob around the holidays.

This is the Patriots’ survival guide to Thanksgiving, from their family to yours.

So, about that ex. There’s a simple solution here.

How are they doing? You have no clue. You can’t speak for them.

“That’s the biggest one,” veteran cornerback Jonathan Jones said. “You know how it gets with relatives (asking), ‘Is this going on with the team?’ And I just say I don’t know, I know about me and I can speak for myself. That one comes in handy.”

Refusing to speak on another player or coach’s behalf is a Patriots staple. Belichick said it twice during a press conference on Oct. 26. Two days earlier, Mac Jones used the line after a miserable Monday night loss to the Bears. He also invoked it during his first press conference after suffering a high ankle sprain on Sept. 25.

The notion of speaking only for yourself tends to leave a strong impression on rookies, including offensive lineman Mike Onwenu in 2020 and wide receiver Jakobi Meyers in 2019. It enforces their professional focus and can help steer conversations.

“(Belichick) would say that a lot,” said Onwenu, who admitted he refers to the media rules in his day-to-day life. “Speak for yourself, don’t speak for others. All of that really translates to just focus on yourself. Everything else, what other people say, doesn’t really matter.”

“That’s my biggest one,” Meyers said.

Speaking for yourself also shuts the door on most opportunities for misinterpretation, controversy or the dreaded ‘D’ word.

So, about marriage, having those kids, grandkids or getting your high school son or daughter into their college of choice. What’s next?

Recall Belichick’s famed “day by day” press conference on Sept. 28. All questions regarding Jones’ high ankle sprain, a long-term injury that requires four to six weeks of recovery, were deflected with that phrase. Belichick said it 12 times.

His objective was to stall reporters as much as it was to hammer home a point to his players: focus on today. That’s what matters.

Meyers follows the same philosophy when friends or family pump him up for his play. The 26-year-old is tracking to lead the Patriots in receiving for a third straight season and could soon land a massive contract in free agency.

So what would Meyers advise a fan to say when asked about their upcoming good fortune or uncertain future?

“Day by day. I’m just taking it day by day trying to figure things out,” he said. “I can’t really think about tomorrow until I handle today. Just control what I can control.”

His fellow wideout, Kendrick Bourne, is coming off a career year with 55 catches and 800 yards. But don’t remind him about last season. His focus is on today, too, knowing that on the field and in life looking backwards while you run will only slow you down.

“You don’t want to fall into the trap of past success,” Bourne said.

And as safety Kyle Dugger suggests, if all else fails at the Thanksgiving dinner table, stretch out the present as long as you can.

“Stuff your mouth,” Dugger said. “Put a bunch of food in your mouth, point to your mouth, tell them to wait and just keep stuffing your face.”

Patriots-Jets film review: How the old Mac Jones resurfaced and why he wasn’t good enough

3. Don’t believe or fuel the hype

So, you’re speaking for yourself, you’ve remained present, but the compliments are nonetheless uncomfortable. The family fawning is too much, however well-meaning it may be. How do you diffuse it?

The humble Meyers, who once said he aspires to be a “security blanket,” a professional Plan B for quarterbacks, again has the right answer by Belichick standards.

A cousin of “ignore the noise,” extinguishing the hype is a Belichick. His players also tend to dismiss positive feedback well, but their more common tactic is to redirect. For example, pump Hunter Henry’s tires, and he’ll pull you into a completely different topic.

He suggests fans do the same at home.

Dugger, on the other hand, pulls out his anti-hype cliché handbook. And if that doesn’t work, he says, whip a word salad.

“They might have to talk in circles. Just start to go into a speech or spiel about something or navigate around it and throw it for a loop with something. Basically just say a lot of nothing,” he said.

The bottom line for cornerback Jalen Mills is simpler. Hype will come and go in life, so why ride the wave when another is right behind it?

“It’s all about never getting too high or getting too low,” Mills said. “One week I could have two interceptions, then the next week you gave up a big play. So I’d say to people just ignore the noise.”

So, all else has failed.

The questions, the compliments, the insistence on discussing the future keep coming. Since you can’t defer to Belichick like his players do, here is the Patriots’ other fail-safe: “I don’t know.”

Patriots safety and captain Devin McCourty is among the more long-winded interviews on the team, but a seasoned veteran at shrugging his shoulders. He admits to executing Belichick’s rules in his personal life, too.

“I mean, most of the time people at my house are my close family. But let’s say it’s just a random friend I haven’t seen in a while starts asking (about the team), I’ll be like, ‘I don’t know. I have no idea,’ ” McCourty said.

Added Jonathan Jones: “Don’t say anything at all. They can’t twist your words if you say nothing.”

Playing dumb is an unkind tactic for family, of course. But in Bourne’s mind, admitting to a lack of complete knowledge is more often just being honest. How often is he certain about the answer to any tough question?

“That’s one of the best ones. A lot of times you really don’t know,” Bourne said. “You just don’t know, so then you can’t answer that.”

More than eliminating distraction, such an admission should also something worse with family, like a dinner table debate over politics. And even if all the topics are safe, but you find uncomfortable, players say the line still works.

Behold, a classic from Belichick in Aug. 2021. How would he describe running back Rhamondre Stevenson’s rushing style?

“Every player has their own style,” Belichick said. “I don’t know.”

Ask any Patriot about a strong individual performance, and he’ll rattle off several teammates who helped him succeed. Ask about a poor play or game, and he’ll jump on the blame grenade. Same goes for Belichick, whose post-game press conferences after losses have and always will start with him saying he must coach better.

And when players don’t follow that protocol, even opponents, Belichick will bring that to the Patriots’ attention in team meetings — if they haven’t already seen it themselves.

No bulletin board material. Period.

“You don’t want to create something that you have to talk about later with coach (Belichick) or have something spread that you’re not really saying,” Bourne said. “So just be smart about what you’re saying.”

No talking about injuries or contracts

Remember the last time a Patriots player disclosed much about either?

The last of the four rules listed by the exit sign, managing expectations at 1 Patriots Place is a constant focus. But every season, Belichick reiterates the same talking points.

Give your best, put the team first and be attentive. That’s it. No talk of Pro Bowls, Super Bowls or making the Hall of Fame one day. Keep it simple. His players abide, even the verbose ones, like trusted captains McCourty and Slater.

“Well, I always try to give you guys something,” Slater said of his long answers.

Then he paused. A grin spread wide.

“Without giving you anything.”