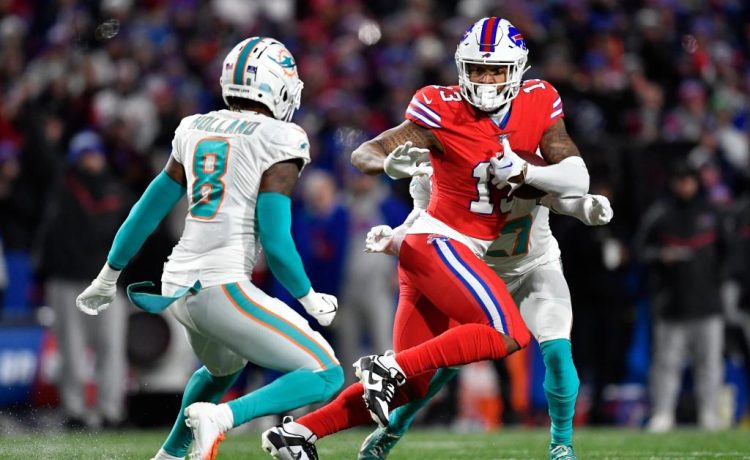 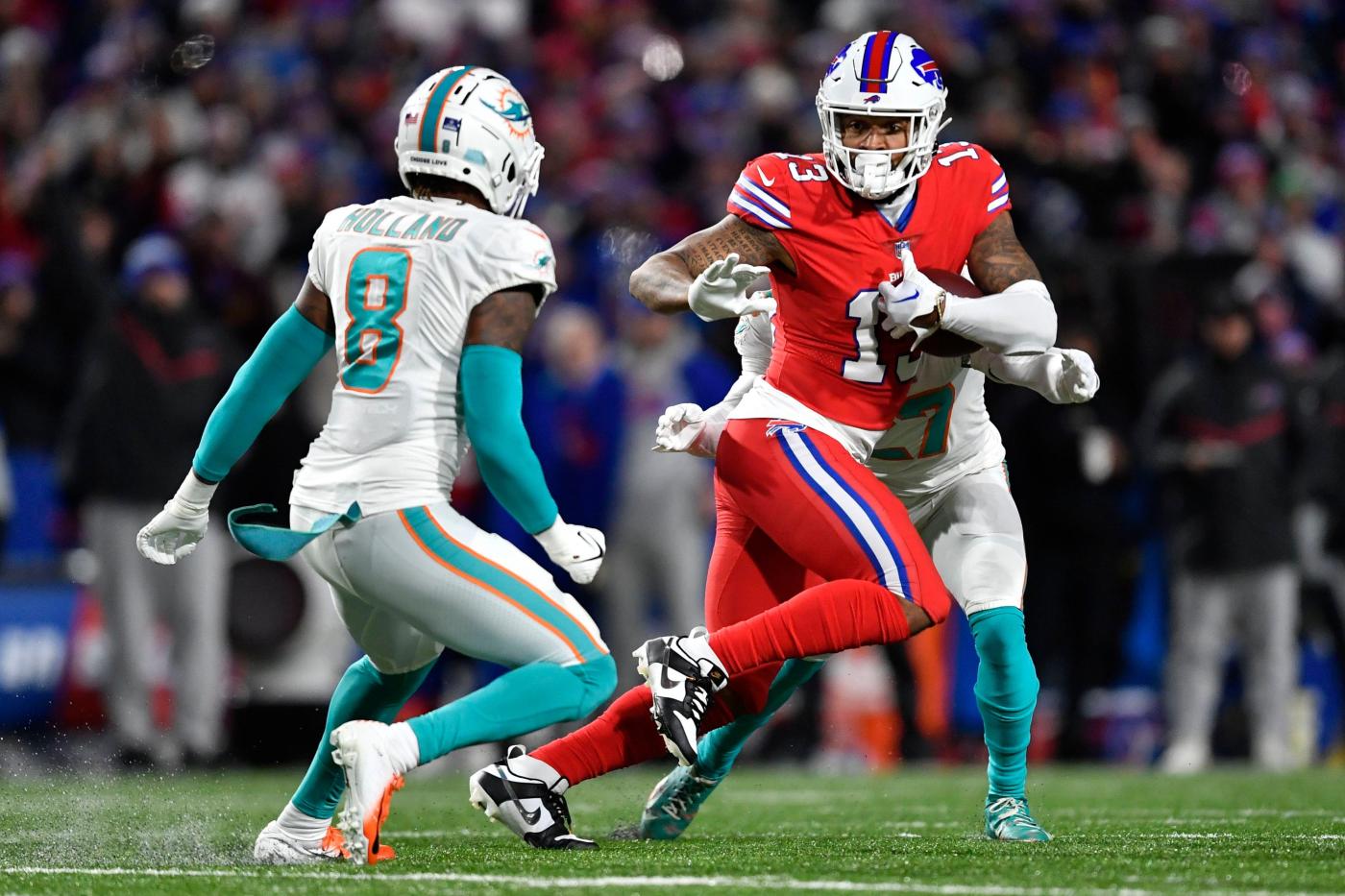 Q: After having both won and lost to Buffalo this season, how are the Dolphins going to use those experiences to game-plan this week? Do they still view them as a division rival or is this matchup on a whole other level in terms of game-stakes and perception since its playoffs? – @polaricoh on Twitter

A: It’s a classic scenario of two division rivals splitting regular-season matchups and then getting paired again in the postseason.

First and foremost, the injury updates this week will determine how much can be taken from both the successes and failures in two previous meetings with the Bills — this third one now an elimination game in the playoffs.

If Tua Tagovailoa can’t get cleared through concussion protocol and play, then everything changes in the game plan. It will have to be tailored for either Teddy Bridgewater, playing through a dislocated pinky finger on his throwing hand, or Skylar Thompson, who managed the game against the Jets well enough to avoid mistakes and win — but that effort won’t be good enough at Buffalo.

The Dolphins played two tight games against the Bills, winning 21-19 at Hard Rock Stadium and falling on a last-second field goal, 32-29, at Orchard Park’s Highmark Stadium. The latter matchup showed Miami can compete with the Bills, even on the road and in the cold, when mostly healthy.

The odds are really stacked against Miami, but beyond Tagovailoa, the Dolphins need Terron Armstead at left tackle. They would like to have running back Raheem Mostert back after he was successful last time against the Bills, but his status is heavily in doubt with a broken thumb.

Miami was effective on the ground in the last game, which helps an offense sustain drives. It didn’t have Jeff Wilson last time, so he would have to fill the Mostert void and Salvon Ahmed will need to produce in spelling him.

Defensively, the Dolphins need a good week of recovery from Xavien Howard after he returned from the knee injury that cost him the New England game. They can’t have the version that was constantly getting beat by Garrett Wilson last Sunday go against Stefon Diggs this week.

Miami also can’t stop scrambling quarterbacks, and Allen went for 77 rushing yards in the last meeting. Dolphins linebackers and edge rushers struggle to contain him. Do you use safety Jevon Holland as a spy? Maybe some, but you need Holland roaming the back end, too. Different looks will have to be utilized to keep Allen honest.

Q: I like Ahmed but we need more depth since Mostert might be out and Gaskin is on IR, so will we add someone over the week? – @Banwello3 on Twitter

A: It would probably be as simple as elevating La’Mical Perine up from the practice squad. Maybe another back is added to that practice squad on top of that, but it would be a lot, with the specifics of Mike McDaniel’s offense and the run game, to ask a tailback unfamiliar with the offense to come in off the street and contribute in a playoff game. Perine has at least been with the team since mid-October.

Q: Is the team even enthusiastic to be in this position? Or is the malaise that set in post-West Coast trip still in full effect? —@TaylorLessThan3 on Twitter

A: I would describe the team seen in the locker room Sunday after clinching a spot in the postseason as not satisfied, one that feels this is the bare minimum of its goals and now wants to make some noise in the postseason.

Players are enthusiastic but not overly celebratory — maybe with a hint of relief, as well, after a postseason berth that once seemed so guaranteed came down to a must-win scenario in Week 18 after five consecutive losses.

They know they face a tall task, especially with how many injuries they’re dealing with, but they’re competitors and will do exactly that — compete.

Q: What will take this team over the top next season? — @LasersBets on Twitter

A: Health, for one. You have a franchise quarterback that consistently has missed time. The same goes for left tackle Terron Armstead, who is as solid as they come when healthy, but you always knew he probably wouldn’t make it through a full season. Raheem Mostert, same thing. This defense hasn’t had a 100-percent Xavien Howard. The team traded a first-round pick for Bradley Chubb, and he has an injury history. The defense didn’t have Byron Jones all year and lost fellow cornerback Nik Needham and safety Brandon Jones for the year, along with defensive end Emmanuel Ogbah.

McDaniel would likely prefer to keep his offensive staff intact to give his system more time to flourish with extended continuity. The defensive side, led by coordinator Josh Boyer, has underperformed, along with special teams. But after those two units spearheaded the effort to win an 11-6 game to reach the playoffs, if those areas get turned around for a competitive playoff run, it could change the offseason momentum that currently points to imminent changes.

The Dolphins have to shore up the secondary. They’re likely to move on from Byron Jones. Could Kader Kohou be counted on for continued development to be that starting cornerback? Is it as simple as having Howard return to form and getting Brandon Jones and Needham back? Inside linebacker will be a position to seek an upgrade. Offensively, the tight end room could get revamped; McDaniel may find a running back he likes in the draft, and the offensive line is still a work in progress after adding Armstead and center Connor Williams.

Q: When will the ping pong table be burned? I will personally pay for whatever kerosene is needed. — Jeff B on Twitter

A: Let the record show, the Dolphins are now on a six-game winning streak without a ping-pong table in the locker room at the team’s practice facility and have lost seven straight with one present.

They started 3-2 with the first one, and it was removed after two consecutive defeats. Once it was gone, they lost one more game but started their five-game winning streak. A new table surfaced the Friday before the West Coast trip began. That’s when the five-game losing streak occurred. With the new ping-pong table removed, Miami won again on Sunday.

Can Tua suit up for wild card game?

Why is the run game absent?

How impactful can defensive front be?

Are Miami assistants in line for head coaching jobs at season’s end?

How will defense fare on West Coast trip?

Should Mike Gesicki have been shopped in trade talks? Why so many penalties?

Is 8-3 with a 5-game win streak in Miami’s future? Does Brandon Shell hold on to RT job?

Why not use Mike Gesicki as WR?