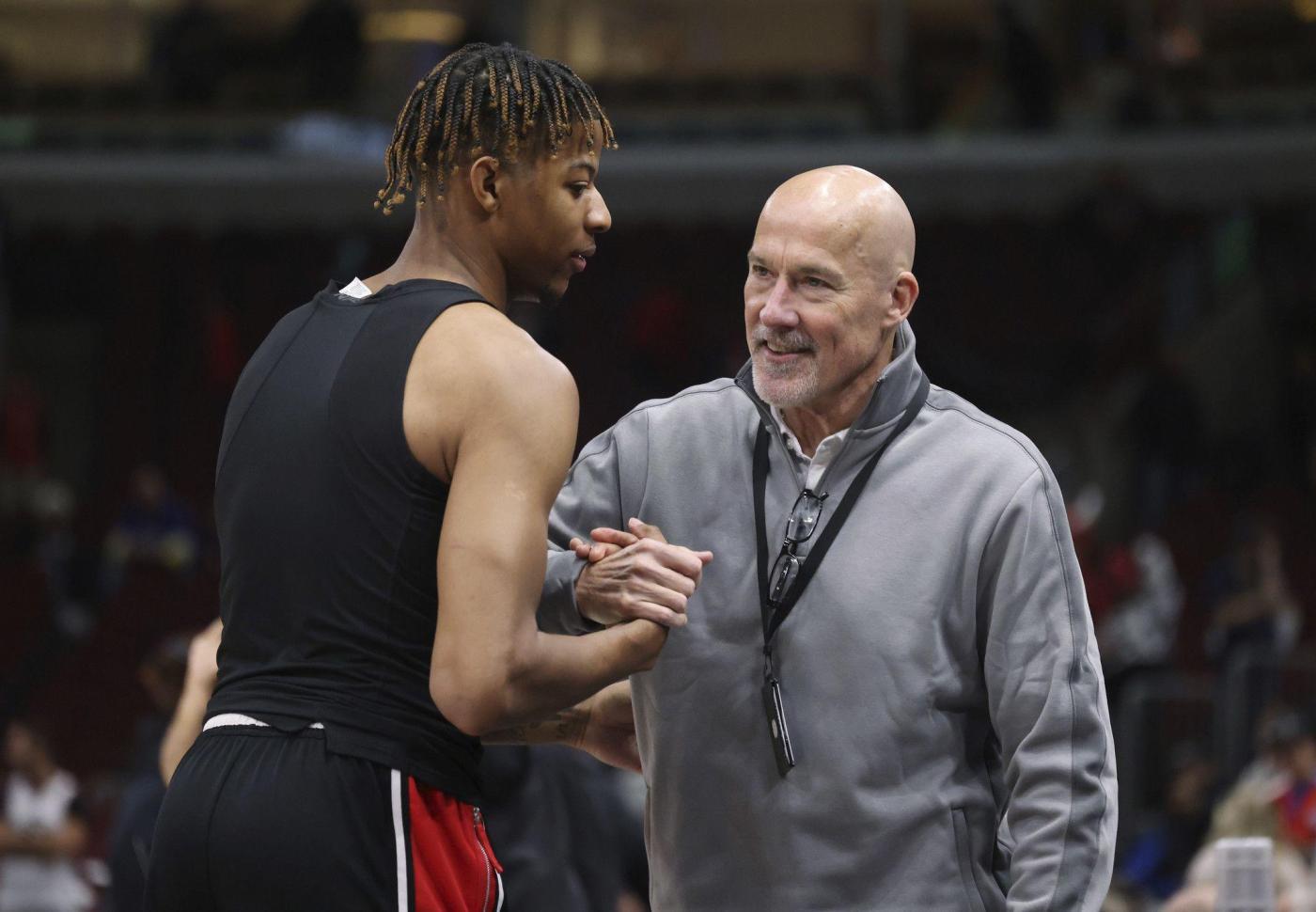 Dalen Terry had little time to rest this weekend.

The Chicago Bulls rookie debuted with the Windy City Bulls on Saturday, then logged another G League game Sunday afternoon in Hoffman Estates before driving back to Chicago to suit up for Sunday night’s game against the Denver Nuggets at the United Center.

Terry entered in the fourth quarter of the 126-103 loss to the Nuggets, sinking a 3-pointer and finishing with five points in a rare double shift between the G League and the NBA. For Terry, two days stuffed with basketball was the epitome of a perfect weekend.

“It felt good to go against somebody besides the imagination in my head,” Terry said. “I’d been asking to go down (to the G League). I just like to play basketball. I’m not a guy that’s here for the money or anything like that. I just want to play. If I can’t play up here or if there’s limited time, then I’d rather go down there and play and go work on something.”

Entering Sunday, Terry had tallied 22 minutes over seven NBA games in the first month of his rookie season. His playing time actually increased because of a schedule front-loaded with back-to-backs and injuries to Zach LaVine and Coby White.

But as the Bulls enter a more relaxed period of their schedule, they wanted to find more minutes for Terry with their G League affiliate. He logged more than 30 minutes in both games against the Iowa Wolves, finishing with 18 points, nine assists and eight rebounds Saturday and 14 points and 10 rebounds Sunday.

“We’ve had a pretty condensed schedule and we had some guys out, so it was good for him to get his feet wet in some of these (NBA) games,” Bulls coach Billy Donovan said. “But you need significant and impactful minutes on a regular basis like (he’s gotten) in the last two days.”

Moving a player to a G League affiliate can be tricky — some players see it as a demotion or a downgrade from the top competition.

But Donovan said that wasn’t a concern with Terry, who specifically requested a move to Windy City to ensure he stays in game shape during any lulls in playing time with the Bulls.

“It’s all your perception,” Donovan said. “For him, he’s eager to play. He wanted to play. He likes that. If he sees an opportunity for himself to improve and get better and get the opportunity to play, he’s going to feel pretty good about doing that.”

Terry spent his summer seeking out pickup games in Los Angeles, Chicago and Seattle. He trained with any NBA player he could connect with, including Kyrie Irving, Kevin Durant, Harrison Barnes and Jamal Crawford.

During one of his first pickup sessions before his pre-draft workouts, Terry landed a two-on-two game with Irving and Durant. As the pairs lined up to start the scrimmage, Irving gestured to Durant, then back to Terry.

“You got him?” Irving asked.

Terry said his response was immediate: “All right, bet.”

It wasn’t an even matchup. Terry said Durant pulled out every trick in his bag — including hitting half-court shots — but Terry cheerfully described the matchup as a valuable learning experience.

“I mean, I was guarding him a little bit,” Terry said. “I think I stole the ball from him one time and then he got to talking. That’s KD, so he got to doing what KD does. … Nothing I could do about it, but he had to guard me too.”

Although the Bulls want Terry to use the G League as an opportunity to improve himself, Donovan emphasized the importance of Terry fitting seamlessly into the Windy City lineup rather than jacking up a high volume of shots or playing selfishly.

Terry said he focused on cohesive basketball in his first two games with Windy City.

“I’m not a player that goes down and tries to score 40 or something like that,” he said. “I just want to play a complete game.”

Donovan added that scoring isn’t always the focus for rookies and other developmental players during stints with the G League affiliate.

Terry is already a defensive-minded player. Much of his playing time with the Bulls has revolved around his ability to provide defensive energy on the perimeter. Donovan wants Terry to continue developing that side of his game with Windy City.

“For younger players, when you look at their shots at the end of the game, they spend probably three or four more times on defense than they do offense,” Donovan said. “So part of their development needs to be defensively — how they’re guarding the pick-and-roll, off ball screens, blocking out, being in the right position defensively.”

Terry likely will continue to cycle between Windy City and the Bulls throughout his rookie season, especially when White has recovered from a left quadriceps injury.

Regardless of where Terry earns his minutes, Donovan said the Bulls are confident in the rookie’s ability to grow through these early games.

“He’s a very, very competitive guy,” Donovan said. “He’s a good worker. He’s eager to get better and learn a lot more. And he will just because of his spirit and his disposition.”