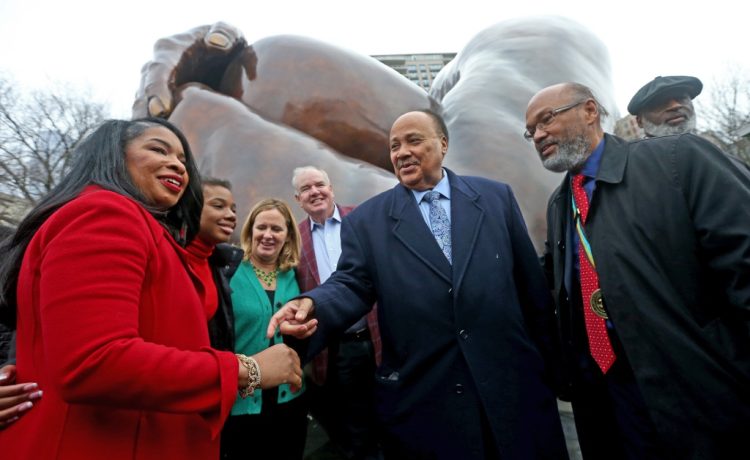 Count 14-year-old Yolanda Renee King as a big fan of the new “The Embrace” memorial on the Common, honoring her grandparents Martin Luther King Jr. and Coretta Scott King.

“I love this monument,” she said. “I see the love and strength and unity in these hands and how they symbolize a beautiful marriage and partnership. It was one that changed the world.”

At long last, the 20-foot tall, 40-foot wide monument — five years in the making — was officially unveiled Friday during a two-hour ceremony near the common’s 1965 Freedom Rally Plaza, the site of the memorial.

More than 1,000 people — many local and state officials, representatives and community activists and leaders — attended the celebration that featured songs and speeches, including powerful remarks from the King family.

While earning his Ph.D. at Boston University, MLK met Coretta Scott King, a student at the New England Conservatory of Music, in Boston in the early 1950s. They returned for one of Boston’s first freedom marches from Roxbury to Boston Common, held April 23, 1965.

Martin Luther King III recalled his parents’ love for Boston and how many prominent figures in the abolition and civil rights movements called the city home at some point in their lives. The memorial honors 65 local leaders chosen by the community who paved the way for Civil Rights through the 1950s to the 1970s.

“Whenever I’ve come to Boston in the past I’ve always felt a powerful bond of solidarity with this first great American city,” Martin Luther King III said. “Of course, it is the city where my parents met, fell in love and decided to create a family, and in a way, I owe my very existence to Boston.”

While MLK gets recognized with a federal holiday, one that is often celebrated by community service endeavors, many of the dignitaries who delivered speeches said it’s essential to remember the life and contributions of Coretta Scott King.

After MLK’s assassination in 1968, she fought for years to make a national holiday to honor her late husband. Her efforts proved successful in 1986 when Martin Luther King Jr. Day was made a federal holiday.

“Those hands,” Arndrea Waters King said, “the way they clasp and hold onto each other is just a remarkable statement of mutual love and solidarity.”

Though the memorial is officially complete, Paris Jeffries said his group’s work will continue. Embrace Boston will be helping develop a project that will bring a 31,000-square-foot town square — the Embrace Center — to Roxbury, extending Nubian Square to the Ruggles MBTA stop.

Jessica Bolt, former principal at the grade K-8 King School in Dorchester, arrived well in advance of the ceremony, standing outside of a fence that blocked off access to the memorial to the general public. The fencing is expected to be taken down by early February.

Yolanda Renee King never met her grandparents, but she said she’s studied their writings, listened to tapes of them speaking and watched videos of them in action. She views the monument as a ‘Love 360’ since it is dedicated to their love, and more love is needed in the world.

“I feel like that they are somehow with me, that our spirits are joined in the quest of a just, loving and peaceful world,” she said. “I am very proud to be their granddaughter, but I am also challenged by their inspiring legacies of vision, courage, hope and healing, but I know I am not alone. There is a sense we are all children and grandchildren of Martin and Coretta Scott King.”