Todays Though > News > If New York is dreaming about a blockbuster, it may as well dream about Shohei Ohtani – Boston Herald
News

If New York is dreaming about a blockbuster, it may as well dream about Shohei Ohtani – Boston Herald 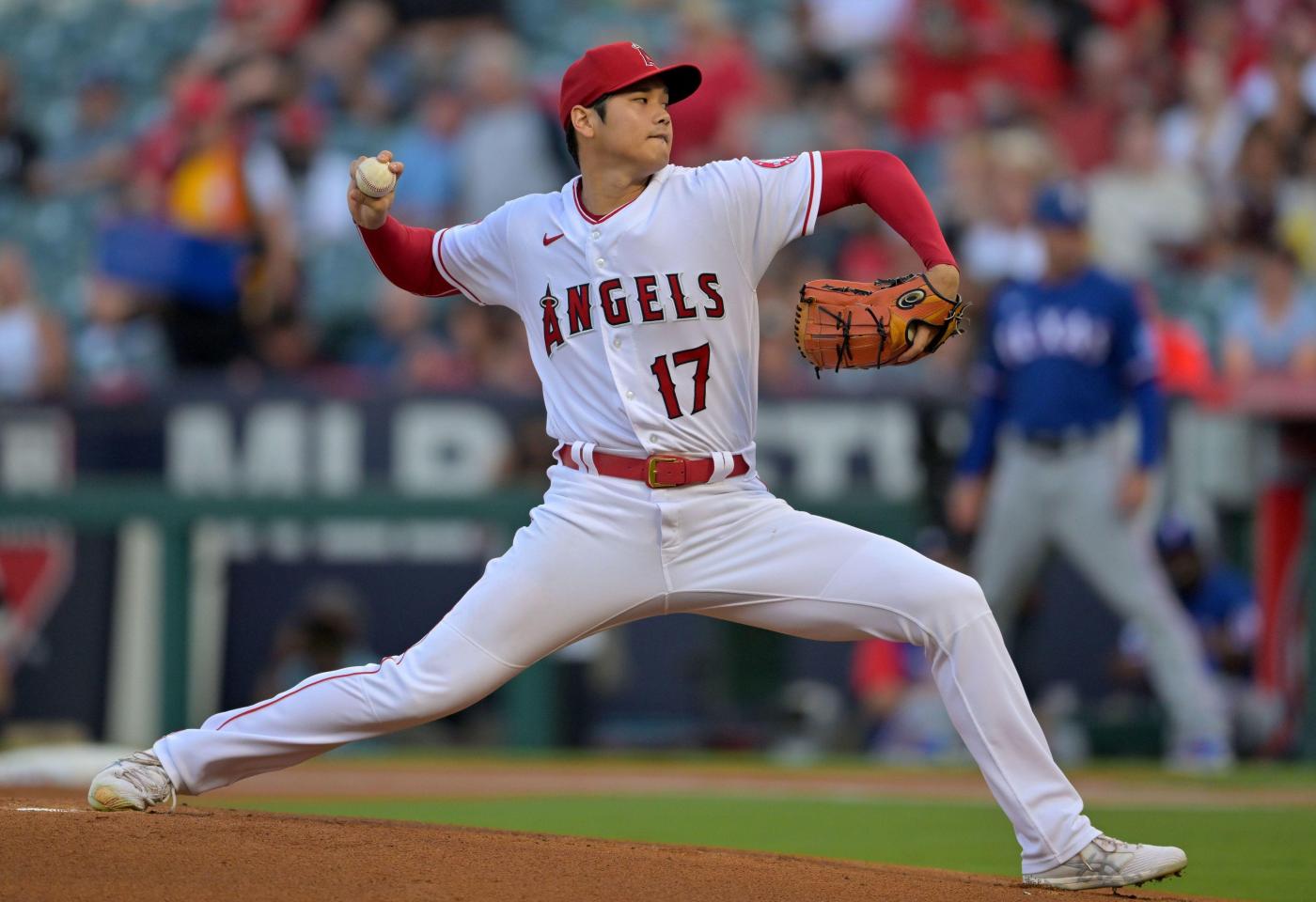 We know that Juan Soto is 23 years old, know what he’s done already, know how he has all the OPS+ disciples overwrought with excitement. We know how quickly Soto became a fever dream around here among all the Yankee general managers without portfolios, as if a young Willie Mays had suddenly gone on the market. Soto, known as the Latin Mamba in Washington, is some talented kid and any team, contending or not, should want him, at least within reason.

But the one the New York teams should want, and especially the Yankees, is Shohei Ohtani, the kind of player who comes around every hundred years.

Am I convinced the Angels are going to move him? I’m not. Do I think he could somehow end up in New York? He made it clear he wasn’t coming to the big city when he was ready to leave Japan, and the Yankees turned around and traded for Giancarlo Stanton’s big bat and bigger contract instead.

But maybe that was then and this is now.

He’s the one to want, he’s the one you do everything within reason to get, if the Angels really are serious about moving Ohtani and moving him now. This is nothing against Soto, who provides a rare opportunity to get someone this talented at this young an age, which means younger than Bryce Harper was when he went on the market, younger than Mike Trout, Ohtani’s teammate was, when Trout signed a one-hundred-year contract extension with the Angels for a gazillion dollars.

Soto just isn’t the Sho Hey Kid, Ohtani. Because no one is. There is no one in sports like Ohtani at this time. You hear the expression “generational player” tossed around all the time now, to the point of annoyance. There are plenty of guys who fit that definition, in all the pro sports. But a two-way player in baseball like Ohtani really does come along once every hundred years. And now he has.

The last time New York City had the best player in any sport was when the Yankees had Ruth and he towered over baseball. Mickey Mantle, which means the young Mantle, was a force of nature when he was young and still had his legs underneath him. We know what we did and how he did it. But even in Mickey’s thrilling prime, Willie Mays was over in the Polo Grounds and the great Henry Aaron was on his way to breaking Ruth’s all-time home run record for the Braves. Michael Jordan was Chicago, not New York. Tom Brady was the Patriots, not the Jets. Wayne Gretzky was The Great Gretzky in Edmonton, not when he got to the Garden.

We have had great players and great stars here, without question. Just no one since Ruth who separated himself from the pack the way Ohtani has by throwing pitches 100 miles per hour and cracking home runs that travel even faster than that.

Now he is stuck on a nowhere team, the same as Trout, who starts to look like even more of a star-crossed superstar than The Mick was as his knees betrayed him. But Trout does have his tape-measure contract in place. Ohtani is going to have options, and soon, and it is hard to believe, the way things have gone for the Angels for a very long time, that he is going to be the same kind of good soldier that Trout has been.

Here is what he said this week through a translator when asked the question about possibly being traded out of Anaheim:

“Regardless of where I’m playing, I’m going to give it my all and try to win that ballgame in front of me. I’m with the Angels right now, and I’m very thankful for what they’ve done. I love my team and my teammates. Right now I’m an Angel, and that’s all I can focus on.”

For now he is still an Angel. And maybe next week he is an Angel, with the chance to become a free agent after next season, at which point he will still just be moving up on his 30th birthday. Why does this all matter? Because if he is blessed with good health, if he doesn’t blow out a knee or shoulder or elbow, this young Japanese-born man will remain the single most unique athlete in American team sports.

We hear the name Michael Vick now and think about terrible things that happened to him off the field. But when he was young, before all that, he came along and helped reimagine the quarterback position in the NFL. Steph Curry came along and changed the way we looked at basketball, and turned bad shots into good shots. There are now a lot of quarterbacks in the mold of that young Vick. There are other long-range shooters, even if none of them can shoot like Steph. As spectacular as Curry is, other kids like Trae Young have come along with the attitude, I can do that. Kyler Murray came along to be a vest-pocket version of Lamar Jackson. The line keeps moving.

But no one since Babe Ruth has done what Ohtani is doing in baseball right now. I hope the Angels do move him because he deserves to get out of the dead-end situation in which he finds himself with the Angels. He deserves better circumstances and a better team and, even more than that, he deserves the kind of stage that Trout has never had across his career, one that has seen him play exactly three postseason games in his entire career, and hit exactly one postseason home run.

He deserves a much better stage than he has now, and is ever going to have in Anaheim. We have that kind of stage in New York. Maybe he still has no interest in New York. But our guys, on both sides of town, have to at least find out, right?

We keep hearing that a 23-year-old like Soto become available every half-century or so. Double that with Shohei Ohtani.

Can this happen and will this happen? Probably not. But it is, to paraphrase a very famous line, sure is pretty to think so. There isn’t even the hint of a suggestion here that the Yankees and Mets shouldn’t be interested in Juan Soto.

But the Sho Hey Kid is the one they should want.

And so should you.

Apparently we can call off the prayer vigil, Charlie Barkley has decided not to go broadcast golf for the Blood Money Tour.

And while we’re on the subject?

If Greg Norman could have performed on Sunday the way he shills for the Saudis now, imagine how many more majors he might have.

Maybe he wouldn’t even have gotten pantsed by Nick Faldo the way he did at the Masters one time.

Cameron Young, the kid from Fordham Prep and Sleepy Hollow, followed up the 65 he shot in the final round at the Old Course by being 10-under at the Rocket Mortgage Classic in his first two rounds since The Open.

I worry that Clay Holmes is being overused, which wouldn’t make him the first out of that bullpen.

Francisco Lindor is quietly – if he can do anything quietly on a ballfield – having a terrific season for the Mets.

How are we going to find out on Kevin Durant, one of those puffs of smoke at the Vatican when we get a new Pope?

One more thing about Norman and the guys who took the money:

They need to take all that stuff about how they’re just doing it to make golf a force for good and blow it out their ears.

There has been no worse job of general managing in baseball this season than the one Chaim Bloom has done so far with the Boston Red Sox.

They keep going the way they’re going and 2018 will be as much a distant memory as 1918 was when the Sox were trying to get out from underneath the Curse of the Bambino.

The deal that sent Mookie Betts to the Dodgers just continues to be the worst transaction since the one that did send The Babe to New York.

Sometimes you get the idea that the greedy mess that is college football makes pro sports look like church.

There has never been cooler walk-up music in the history of baseball, not even “Enter Sandman” for Mo, that is more rousing than Edwin Diaz’s “Narco.”

Is the sky still falling because the Mets had to give up the Kelenic kid to get Diaz?

Ian Rankin has a new John Rebus novel coming in the ball, underneath one of the great titles:

“A Heart Full of Tombstones.”

The last time the Yankees had a home run attraction like Aaron Judge was 1961.

It took two guys that time to own the summer that year:

When Roger ended up hitting 61.

Maybe that number is about to be in lights again, because of the Yankee star who wears No. 99.

I keep watching the video of Sen. Josh Hawley, who raised a fist of encouragement to the insurrectionists on Jan. 6 before running for his life through the halls of the Capitol to get away from those punks, and wonder what his combine time was in the 40.