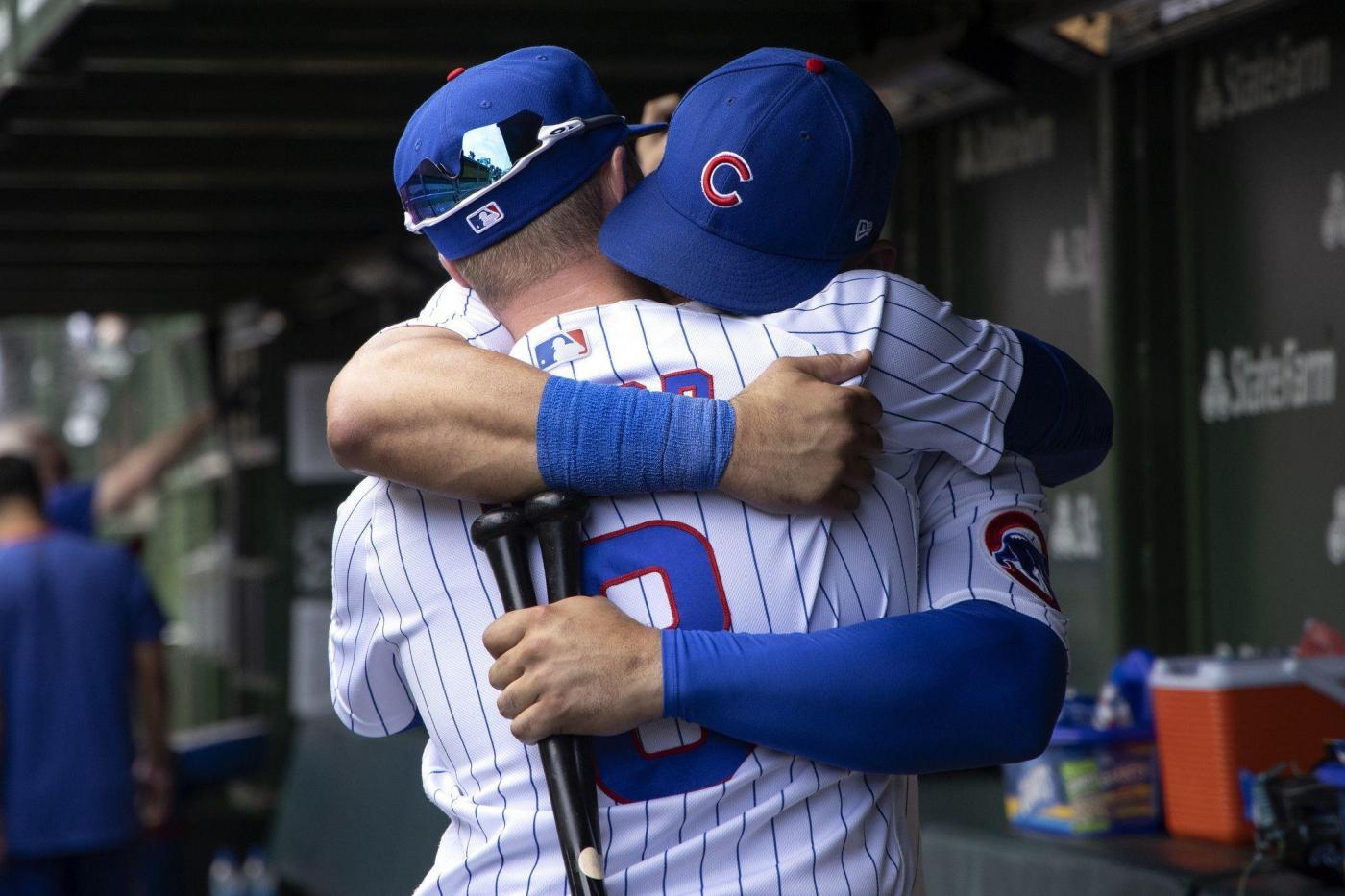 Players come and go at Wrigley Field, and some of the lucky ones get the send-off they deserve.

Such was the case Tuesday for Willson Contreras in the final home game for the Chicago Cubs catcher before the Aug. 2 trade deadline.

While the Cubs haven’t outright said their most popular player would be traded, everyone in the crowd of 30,978 seemed to understand this would be the end.

Contreras was treated to a long standing ovation before his first inning at-bat, stopped for a moment to wave with his helmet, then blooped a single to center on the first pitch. He received another standing O before his final at-bat in the seventh, and pumped his fist before striking out to end the inning.

After the Cubs beat the Pirates 4-2 win for their sixth straight, Contreras was the last player to leave the field, getting bear hugs from longtime teammates Kyle Hendricks, Jason Heyward and Ian Happ, while manager David Ross hugged and lifted him up off the ground like a beer keg.

After one last look, and one final salute from Cubs fans, Contreras was gone.

The show of love, he said, was “awesome” and something he would never forget.

“It makes me feel like if I have to walk away from this team, I’m going to walk away with my head up high,” he said. “I know that I did everything I could to make this team better from Day One when I was called up in 2016.”

Not every departing Cubs star gets a chance to say goodbye the way Contreras did on a gorgeous afternoon at the corner of Clark and Addison streets.

Sure, Ernie Banks received a standing ovation before a crowd of 18,505 at Wrigley before his first inning at-bat — an infield hit — in what would be his final game Sept. 26, 1971. But most leave without the fanfare.

Sammy Sosa walked out on his team at the start of the final game of 2004 and was dealt to the Baltimore Orioles during the offseason, never to return to the ballpark he once owned. Because of the pandemic, Jon Lester’s last game in a Cubs uniform came in front of an empty stadium during the 2020 postseason. Anthony Rizzo and Kris Bryant weren’t in the lineup for their final game at Wrigley last July, with Rizzo asking for the day off — a decision he likely regrets.

But Contreras’ probable exit has been talked about for months, and at this point it would be a complete shock if he remained a Cub past Aug. 2. He hasn’t received an offer on an extension, but said Tuesday if he got one in the next week he’d definitely “look at it.”

“The hope is there,” Contreras said of staying a Cub. “But at the end of the day, they’re going to make a move, they’re going to do it. I don’t want to overthink (the possibility of) staying here, because I’m 70/30 right now.”

As he spoke about his future, someone’s baby began crying in the clubhouse, lightening the mood.

Contreras didn’t rule out returning next year if he is dealt, though that also seems like a long shot. Either way, he handled his lame duck status well all season, though the emotions came flooding out in the last 24 hours.

“I could tell (Monday) he was distracted in-game,” Ross said before Tuesday’s game. “There definitely are thoughts on his mind. It would be unnatural not to be for him. I don’t think any of us really knows what’s going to happen, what the future holds. … He’s an emotional guy. He wears it on his sleeve.”

Several other Cubs may also have played their last game at Wrigley, a day in which Keegan Thompson threw seven strong innings for the win. Ian Happ’s status also is also iffy, and the veteran outfielder was touched by a gesture from his left-field bleacher fans, who autographed a ball for him.

“They’re there every day no matter what, no matter the weather, from April till now, and they care so much,” Happ said. “That was really meaningful.”

But even Happ knew this day belonged to Contreras, who began his long stay in the organization in 2009. From homering on the first pitch he saw in 2016 to his frequent spats with the rival Milwaukee Brewers, Contreras’ Cubs career had been anything but dull.

Many have forgotten he received sparse playing time in his first month with the Cubs, playing behind Miguel Montero and Ross, who was Jon Lester’s personal catcher. The thinking when Contreras was called up from Triple-A Iowa in June 2016 was that he’d get a brief look and return when rosters expanded in September.

“That was the floor,” then-team President Theo Epstein said. “Bring him up as a third catcher, get his feet wet and see how it goes, knowing that we can easily send him back down. But we always were transparent about leaving open the possibility that he might take off and hit the ground running. And he certainly has, which is great.

“But he has willed himself, no pun intended, into this position. He’s obviously playing himself into a position to take on real responsibility and help the team win. So he has earned a spot on the team.”

Though hyped as the catcher of the future, Contreras still had to wait his turn. Former manager Joe Maddon wouldn’t separate Lester and Ross, and said Contreras would have to learn his craft playing part-time.

“He’s young, he’s learning,” Maddon said that July. “You keep him fresh mentally and physically, and he’s going to look like that all year. You don’t want to put too much on his plate right now. I’ve been through that before also, where the new kid on the block, everybody wants a new flavor. And all of a sudden the flavor can lose some of its edge if you expose it too often.

Maddon, who was so close with Contreras some called the catcher “Joe’s son,” helped build the rookie’s confidence. After Contreras posted a 1.004 OPS in September, it was apparent he already was the best of the three catchers.

Ross’ memories of Contreras’s rookie season were of a kid that did “a lot of smiling, fit in really easily, showing off the absolute cannon he had all the time.” And, of course, the home run on the first pitch he saw against the Pirates.

Ross retired after the Cubs won the 2016 World Series, Montero was released during the summer of ’17, and Contreras made the first of his three All-Star appearances in 2018. While he always was well-liked, it wasn’t until Rizzo, Bryant and Javier Báez were dealt that Contreras became the most popular player on the team.

It’s why the probable exit has been so difficult to understand. Contreras love the Cubs. The Cubs love him. But it won’t matter in the end.

“I have a lot of things in my head right now about the fans,” he said Tuesday. “But it’s nothing but love. … The love and support they showed me from Day One was priceless. I’m always going to keep them in my heart.”