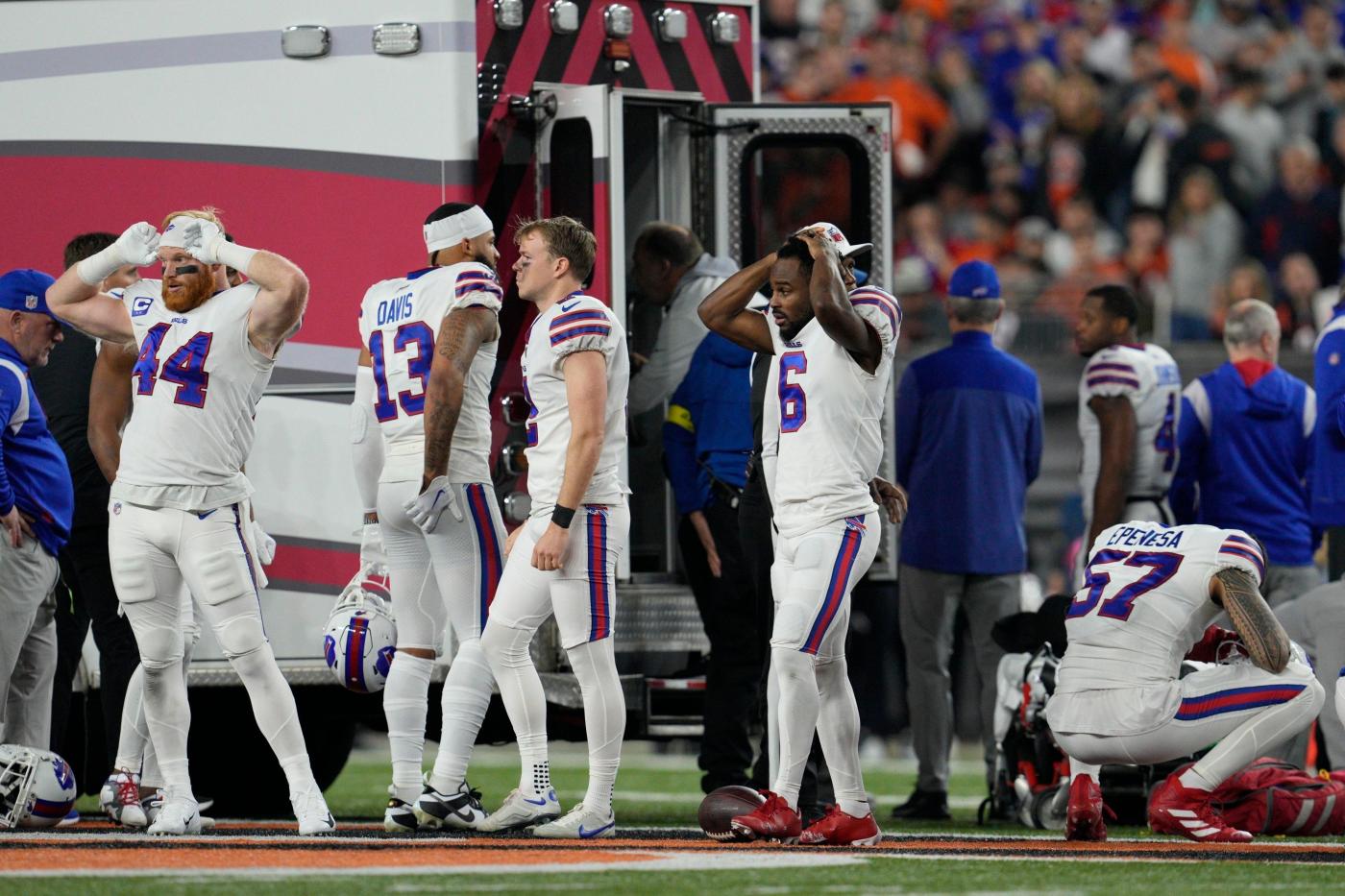 Eventually, the NFL will move on. It always does.

But the chilling scenes that played out in Cincinnati Monday night, with Bills safety Damar Hamlin lying on the ground, with medical personnel feverishly trying to save his life, will never be forgotten by those who were there, as well as those who weren’t.

The images were so real, raw, and dripping with emotion as Hamlin was administered CPR.

Rival quarterbacks Josh Allen and Joe Burrow embraced. Some players knelt in prayer while others stood in stunned silence, with tears streaming down their faces.

Staring at one’s mortality is both daunting and haunting. It shakes you to the core.

Naturally, the overriding concern is for Hamlin, who remains in critical condition at the University of Cincinnati Medical Center. That’s where everyone’s thoughts and prayers reside.

But the aftershocks remain, and will for a very long time.

If you’re a player, how do you get past this? How do you move on once play resumes? Or even practice? That’s how jarring and traumatic that scene was at Paycor Stadium.

The Bills and Bengals will have the toughest time dealing with the emotional and mental aspects, and the hope here is that every team will provide support for its players, whether it’s the Patriots, who are expected to meet the Bills in Orchard Park Sunday, or any of the other 31 NFL teams.

“It was hard to watch. As tough as we all like to think we are, that was different,” said former Patriots linebacker and current radio personality Ted Johnson. “There’s going to be a lot of guys questioning how much longer they want to play. That play is going to have an impact. The fact that you could see it on national TV, it was a big game, it was right there, we all saw it and that’s what makes it so profound. Because it sure looked like that hit is what caused heart failure.

“We all think we’re invincible, and then man, you see that, and realize, ‘Oh, you’re not.’ Guys lose their edge a little bit.”

To a degree, some of that has already happened with players given all the information and post-career concerns now known about suffering concussions. This will trigger even more hesitation.

They will no doubt have some serious discussions with their spouses and families this week about their futures in wake of what happened to Hamlin.

Is football really worth the risk?

The Patriots have a very strong leadership group, and it’s hard not to imagine several captains, be it Devin McCourty, Matthew Slater, David Andrews, Deatrich Wise, Ja’Whaun Bentley or Mac Jones, addressing the situation in some fashion.

With the Patriots headed to Buffalo for Sunday’s game, Patriots head coach Bill Belichick might also feel compelled to speak with the team. Or perhaps some of the assistants will jump in. As it is, the Patriots postponed an expected media availability with the coaches on Tuesday. Chances are, they’re dealing with this internally, which is the right way to go.

This isn’t something to just sweep under the rug.

The players are going to be confronting the issues, whether internally, or externally.

“My guess is, guys retire sooner than they ever have,” Johnson said, looking at the big picture. “The money is four times greater than it ever was, working conditions are as good as they’ve ever been, but guys now know more about the risks than they ever did, so I think guys might look to retire sooner, rather than later … this is just one of those events where guys, if they were thinking about playing one more year, they might now be saying, ‘No, I’m good.’’’

The league has made strides with respect to the health and safety of its players. It still isn’t perfect, but operational measures and protocols are in place or have been added, especially with regard to concussions.

But there’s nothing any protocol can do to prevent what happened Monday night. There’s no protection for a player who makes a relatively routine play, and winds up needing life-saving measures after suffering cardiac arrest.

There have been a few cases in the past that have left an imprint. Patriots wide receiver Darryl Stingley being unable to get up after taking a vicious hit from then-Oakland Raiders safety Jack Tatum. Stingley suffered a broken neck, and spent the rest of his life as a quadriplegic before dying from complications at 55.

Detroit Lions receiver Chuck Hughes suffered a heart attack in 1971 with less than a minute left in a game against the Chicago Bears. He died in a nearby hospital a little more than an hour later.

In both of those cases, play resumed. It didn’t Monday night in Cincinnati. That has never happened before.

It’s something both the players, as well as the league, will have to deal with.

“This is different. It involves emotions, the threat of long-term viability, moms not letting their kids play. Numbers dwindling, participation dwindling at the lower levels threatening the long-term viability of the sport,” said Johnson. “That is what owners are up late at night worrying about. This is a reminder of how inherently dangerous the sport is. That’s what the issue is, players possibly dying from playing the game of football … because there’s nothing the NFL can do about that play. It’s not like they can change the rules to prevent that from ever happening again.”

Ultimately, players are going to play. They’ll assume the risk that comes along with it, even after what transpired Monday night. They’ll move on with their football careers.

The Buffalo-Cincy game will ultimately be rescheduled at some point, while Week 18 and the playoff slate will ensue.

But those are just logistics. Moving past the human element of what transpired won’t be easy.

As Tom Brady tweeted out Tuesday: “Moments like this put into perspective what it means to play this game we love.”