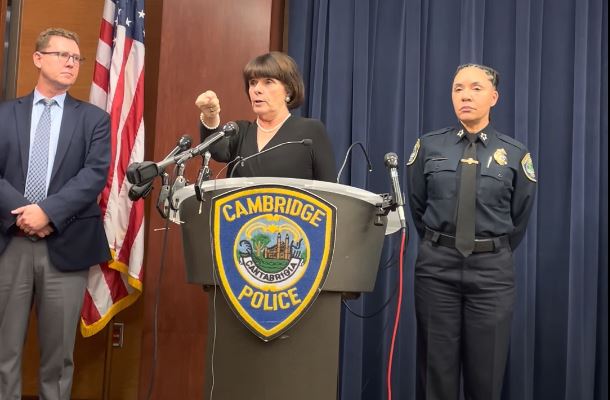 There’s a reason it’s know as the People’s Republic of Cambridge. This once-great city has devolved into a robustly far-left utopia. As such, Public Enemy No. 1 is the police force.

According to a Cambridge Police statement, on Jan. 4  a 911 call from a Cambridgeport resident, who had witnessed a man jump out of the window of a neighboring apartment, further reported that the man was in possession of a machete. The caller said that he appeared to be cutting himself with both the weapon, later identified as a kukri knife and broken window glass.

As the Herald reported, Cambridge Police Commissioner Christine Elow and Middlesex DA Marian Ryan said the officers on the scene tried to verbally de-escalate the situation as Faisal carried a knife in a five-block circle around the Cambridgeport neighborhood that ended on Chestnut Street.

There, Ryan said, Faisal moved toward the officers, who fired at least one “sponge round,” which is a less-than-lethal deterrence round.

“That round was unsuccessful in stopping Mr. Faisal; he continued to advance to the officers holding the knife at one point across his body and then holding it raised out in front of him,” Ryan said

“A Cambridge officer discharged his department-issued firearm and struck Mr. Faisal. He was immediately rendered first aid on the scene until the emergency services responded. He was transported to Mass General Hospital and later died of his injuries.”

This is a tragedy for everyone involved, from Faisal, 20, to the CPD officer put in the position where he had to shoot his firearm.

Why did Faisal approach officers with his weapon?  Progressive activists stress that the why overrides the act itself. That police officers were faced with a man brandishing a knife who kept advancing on them is irrelevant.  So too is the fact that officers attempted a non-lethal method of stopping Faisal.

For far-left locals and activists seeking attention, this is insufficient. Samuel Gebru wrote in an open letter to the Cambridge City Council and City Manager that “it’s hard not to imagine how a more trauma-informed emergency response system with a trained social worker listening to 911 calls with the ability to dispatch CDCS social workers might have responded” to the incident. Fatema Ahmad is the Executive Director of the Muslim League  and one of Boston’s most outspoken supporters for civilizing police construction details. She is also a vocal opponent of Shotspotter, a technology that detects gunfire in high-crime areas of Boston and immediately notifying police and emergency medical services.

Faisal wasn’t shot because he was Bangladeshi. He wasn’t shot because he was a student. Faisal kept advancing on officers armed with a knife after non-lethal attempts to stop him failed. If one of the officers was fatally stabbed that night, I doubt there would be any sympathy from the crowd who gathered last week.  That wouldn’t be part of the activist narrative which turns tragedy into a cause without the foundation of facts.