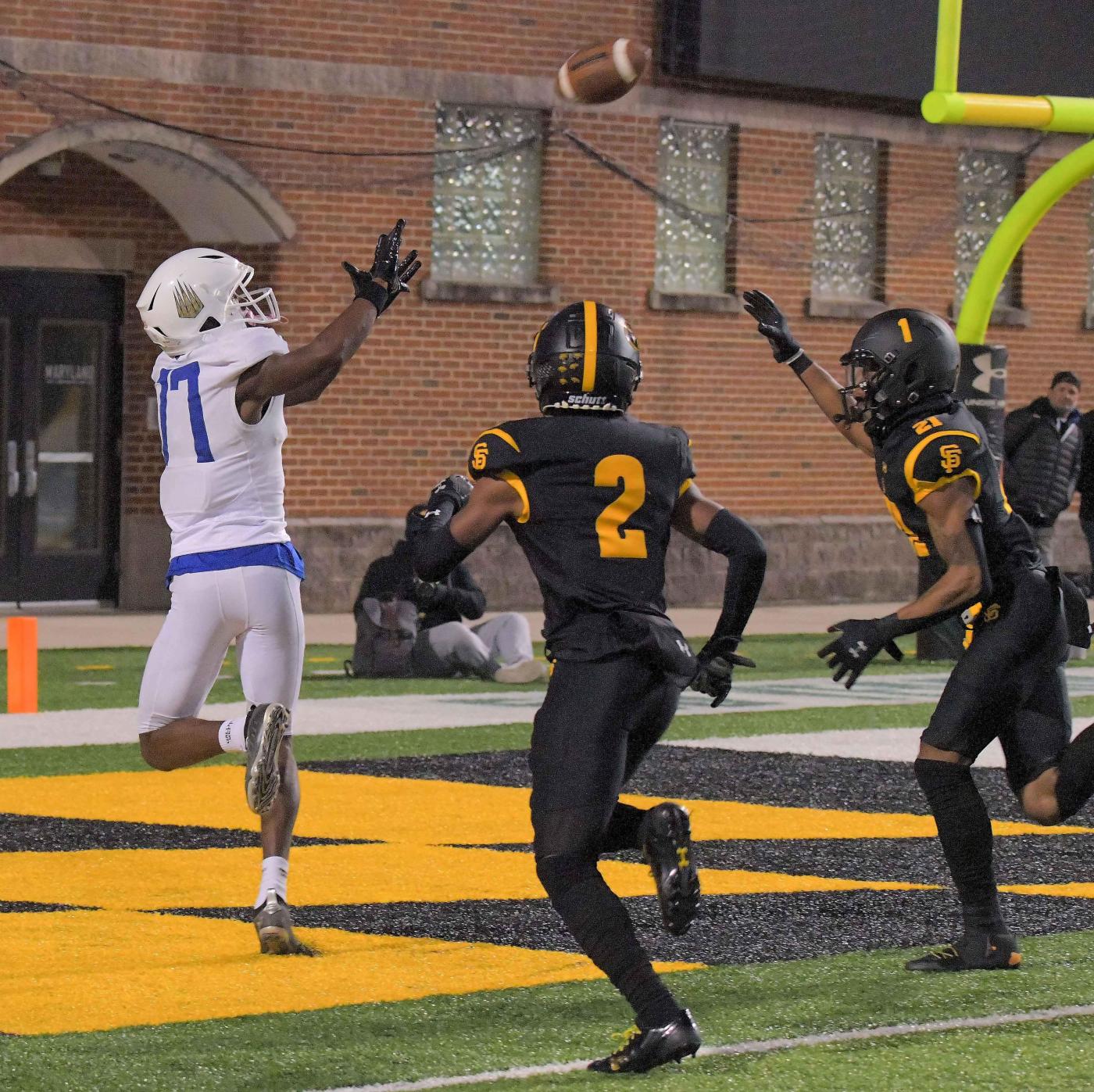 As a flag representing each Big Ten Conference school flew over Maryland’s SECU Stadium on Friday night, dozens of high school players — many with scholarship offers from those very schools — took to the field.

St. Frances Academy, the No. 2 team in the nation entering the game according to the high school sports site MaxPreps, hosted No. 10 IMG Academy, a Florida team, in one of the most nationally anticipated games of the season. Propelled by a 97-yard interception return for a touchdown late in the first half, IMG topped St. Frances, 27-16, ending the Panthers’ 16-game winning streak dating to last season.

A few thousand fans, each paying $10, came to College Park on a 39-degree evening for the matchup of national powerhouses filled with future NCAA Division I players. Assistant coaches from Oklahoma and Tennessee, both of whom were flying back Friday night to help coach their team Saturday, stalked the sideline as they watched and assessed a crop of future college players.

IMG (9-1) and St. Frances (8-1) are among the most dominant high school programs in the country, and Friday marked their fourth matchup; each team has won twice.

“It’s definitely one we circle on our calendar every year,” IMG head coach Billy Miller said. “We know it’s going to be a really good game, competitive game.”

St. Frances jumped out to an 8-0 lead and then, after falling behind, seemed poised to retake the lead late in the second quarter. However, a pick-six by Jordon Johnson-Rubell (who is, of course, a four-star recruit with several offers from Power Five programs) just before halftime gave IMG a 20-8 lead.

The Panthers closed the gap early in the fourth quarter when junior quarterback Michael Van Buren — who has scholarship offers from Alabama, Oklahoma, Michigan, Oregon and Maryland — scrambled for an 11-yard touchdown. After a 2-point conversion, St. Frances trailed just 20-16, but IMG wide receiver Carnell Tate, an Ohio State commit, caught his second touchdown of the evening with 9:01 remaining to give IMG a 27-16 lead.

As the IMG players sprinted and danced around afterwards, celebrating their win in what almost had the feel of a college bowl game, St. Frances players, stunned, hugged one another. Although the Panthers have traveled the country this year — as far as Hawaii — playing top teams from other states, it marked their first loss since August 2021.

“I would’ve loved to see the seniors go off on a win, but that’s part of the game,” St. Frances coach Messay Hailemariam said. “That’s the toughest part.”

St. Frances, an East Baltimore Catholic school that has been around for nearly 200 years, has only had a football program since 2008, but it quickly became dominant with rosters composed of top players from Baltimore, the surrounding area, and even out of state. The Panthers had hoped to go undefeated this season and vie for a national championship — which is awarded via polls at the high school level — but with a loss, that won’t be possible.

For the seniors, many will go off to top college football programs, some as soon as next semester. Wide receiver Ryan Manning will play for the Terps next year.

And for the underclassmen, they will return with hopes to compete again next year for a national title.

“I told them, ‘The sun’s gonna come up tomorrow,’” Hailemariam said. “The seniors, I told them, ‘You’re gonna be onto bigger and better opportunities, and you’re going to grow in life,’ and the younger ones, I want that taste in their mouth to stay there, so it can motivate them and not feel that again.”

At 10:10 p.m., just 17 minutes after the game’s final whistle, security staff ushered remaining fans out of the stadium and crews cleaned up trash. It was only hours until the Terps would host Ohio State on Saturday at 3:30 p.m at the same venue in a matchup nationally televised on ABC.

In the coming years, many of the players in Friday night’s game, from both sides, will play on such a stage.