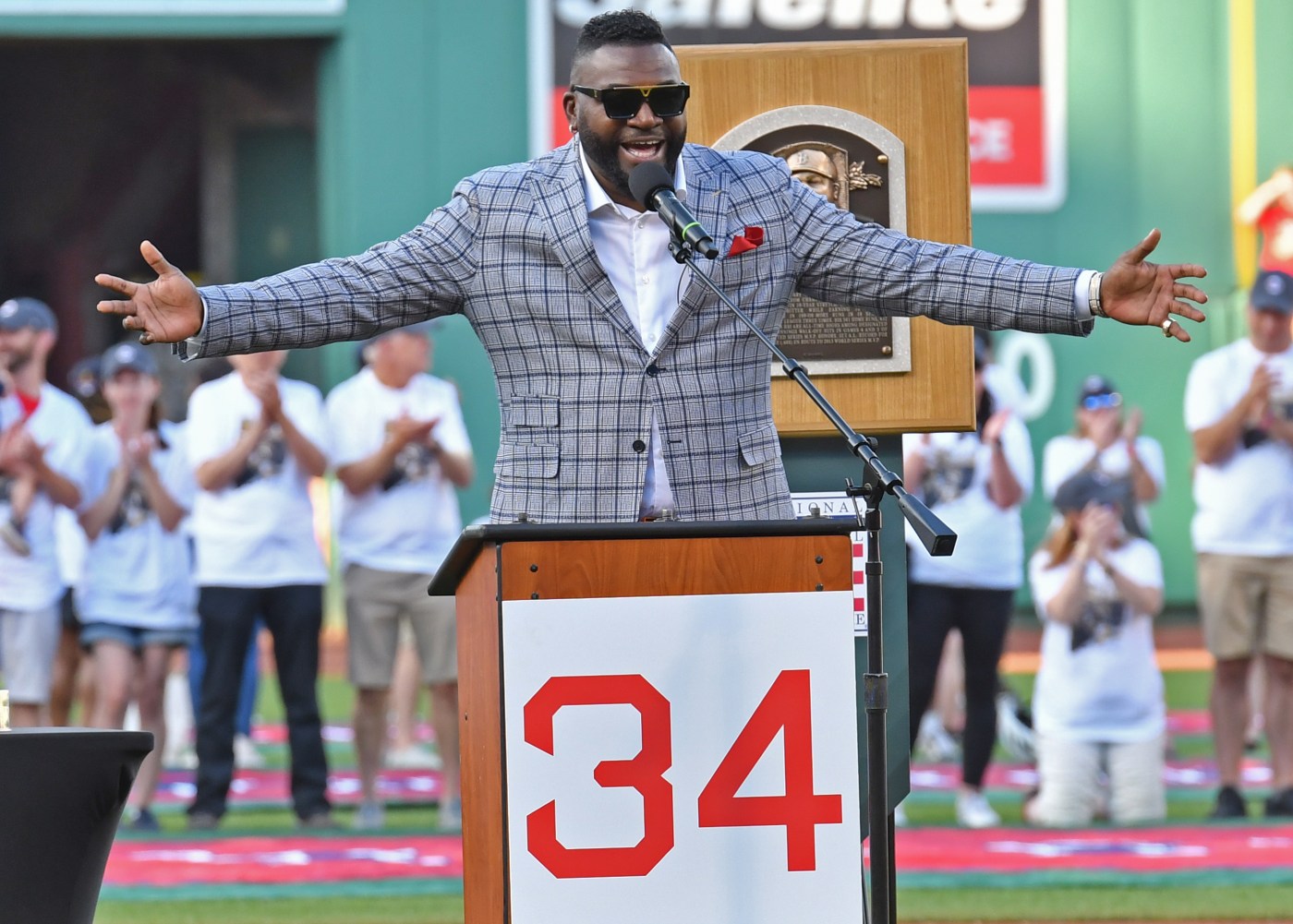 David Ortiz brought some of his Hall of Fame magic to Fenway Park on Tuesday night, when he was honored in a lengthy pregame ceremony celebrating the franchise icon’s induction into the National Baseball Hall of Fame.

“The good luck charm just arrived,” Ortiz joked as he began his speech.

The Red Sox entered Tuesday three games back of a playoff spot but clinging to postseason hope.

Fenway was prepared for Ortiz’s arrival.

Three giant banners draped the outfield. The 2004 World Series banner was unveiled by some of the Red Sox’ longest season ticket holders, the ’07 banner handled by Jimmy Fund kids and those representing the David Ortiz Children’s Fund and the ’13 banner was held by Boston Marathon bombing survivors.

Sox legends Pedro Martinez, Jim Rice and Carl Yastrzemski along with Hall of Famer Vladimir Guerrero joined Ortiz on the field. Former general manager Theo Epstein and former managers Terry Francona and John Farrell sat along Sox owner John Henry and Gov. Charlie Baker, among others, on the first-base line. Ortiz’s family was lined up along third base.

“Being inducted into the Hall of Fame is something that was an amazing experience,” Ortiz said. “I don’t have to tell you guys too much because you were all out there with me.”

Ortiz kept his speech short and simple, thanking the owners, managers and players who guided him during his 14 years in Boston.

“The most important thing, I want to thank all the fans, all the Red Sox fans worldwide,” he said. “Without you guys, trust me, this never would have never happened. Every time I walked into this field and see all the seats full of people expected to win, that was motivation for me to try to come through and try to do better and better and better every day.”

Ortiz thanked his family and then concluded by saying, “Thank you very much, Boston. Here’s your son — I love you forever.”

He threw out a ceremonial first pitch to Jason Varitek to wrap up the ceremony.

Commemorative Ortiz pins were distributed to all fans at the gates, while Hall of Fame gear was sold to raise funds for Ortiz’s Children’s Fund, which benefits children in New England and in the Dominican Republic who cannot afford critical cardiac care.

It was fitting that on Ortiz’s night, designated hitter J.D. Martinez returned to the Sox’ lineup for the first time since the All-Star break.

Martinez went 0-for-2 in the All-Star Game but has since been sidelined with back spasms.

Still, the Sox lineup resemble that of a spring training lineup, with Alex Verdugo, Jalen Davis and Rob Refsnyder in the outfield, left to right, and Bobby Dalbec, Xander Bogaerts, Yolmer Sanchez and Christian Vazquez in the infield.

Second baseman Trevor Story took batting practice on the field and is progressing from a hand injury. The Sox will know more about his timetable at the end of the week.

Former closer Matt Barnes is struggling on his rehab assignment, with an 11.57 ERA over five minor league appearances, but will continue pitching in the minors as he recovers from shoulder inflammation.

Right-hander Josh Winckowski was activated from the COVID-19 injury list and started Tuesday’s game on the mound. To make room, lefty Darwinzon Hernandez was optioned to Worcester and right-hander Phillips Valdez was designated for assignment.

The Sox activated right-hander Connor Seabold from the injured list and optioned him to Triple-A.

The Sox signed both of their highest selections in the MLB Draft, inking first-round shortstop Mikey Romero and second-round shortstop Cutter Coffey to contracts on Tuesday. They’ve also signed some undrafted free agents, including a New England native from UConn: catcher Matthew Donlan.

The signing bonuses, first reported by The Athletic, were $2.3 million for Romero and $1.85 million for Coffey.

Romero and Coffey were at Fenway Park on Monday taking batting practice. Romero, a left-handed hitter, said he cleared the bullpens in right field several times while Coffey, a right-handed hitter, was aiming for the Green Monster.

“It’s been awesome,” Coffey said. “Growing up a Red Sox fan, coming all the way from California, being able to hear my name called by the Red Sox … I’m ready to get to work.”