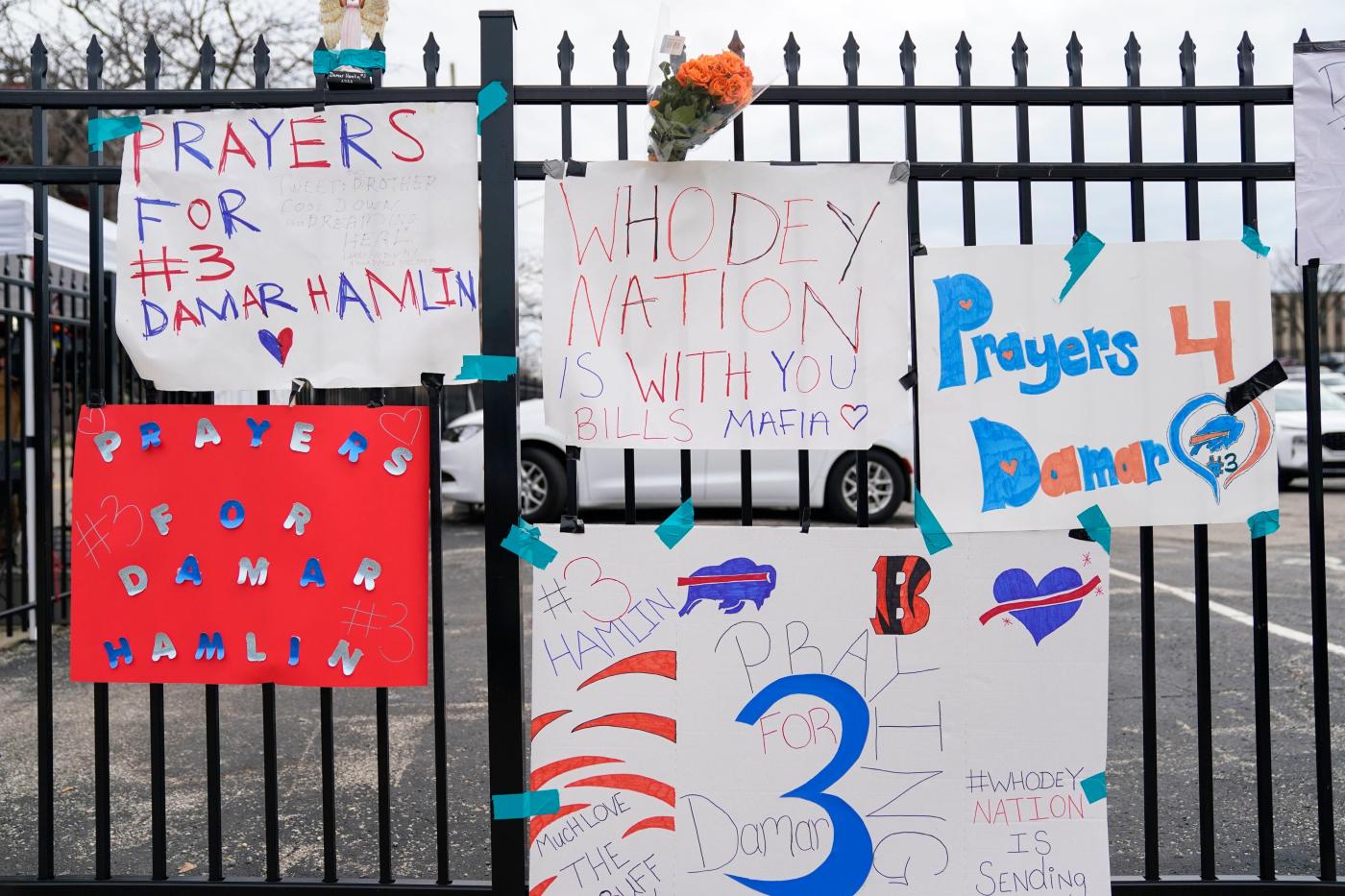 The Free World got to know Damar Hamlin under the worst possible circumstances.

It took an on-field catastrophe, the Bills safety suffering cardiac arrest in the middle of a nationally televised game with the Bengals, to find out what Hamlin is about.

To find out he is a giving person, a guy who cares about the less fortunate. A young man who never forgot where he came from while trying to make it in the world of professional football.

Yet as he fought for his life in a Cincinnati hospital room, it was reasonable to wonder how many other good guys, with compelling backstories, are working anonymously in the National Football League, reduced to faceless pawns on a violent chess board?

Will their only spotlight come in the aftermath of a serious injury?

This was not given much consideration in the wake of the Hamlin situation. While it might try, the NFL fails to humanize its players. And we mean all season long, not just the stuff served up around Christmas or Thanksgiving.

The NFL can’t count on its network TV partners, or even on its owned and operated NFL Network, to find the Hamlin’s of the league. Instead, the stories those outlets trumpet have singular commonality. They are designed to help fuel the NFL’s ratings/money machine. Or continue emphasizing and glamorizing the violence, which is used to sell the game.

Also, week after week all the billboards, promos and features are about the five or six elite quarterbacks who drive the league’s Star Making Machinery. The story about a backup defensive lineman who goes above and beyond to serve his community, is either downplayed or not-even-played.

A consensus has apparently been reached in NFL TV Land that the public doesn’t — or shouldn’t — care about the forgotten guys: Players whose only publicity comes from a last name stenciled on their jersey.

In the minds of NFL marketers, “obscure” players with “feel good” tales, or unusual back-stories, don’t help juice the ratings.

Instead, the public is fed a steady diet of Aaron Rodgers latest pronouncements (why else are the Packers playing the Lions on Sunday Night Football in what could be a meaningless game?) or another story about an NFL star who already is overexposed.

And allowing a human-interest story to get in the way of a Fantasy Football report is out of the question. The same holds true for a pregame show “picks” segment, sponsored by a legalized gambling operation.

But the public embraced the story of Damar Hamlin — the whole story. Will that overwhelming positive sentiment provide an opportunity to alter the way NFL players are covered?

Could it really inspire change?

Bad enough Kayvon Thibodeaux had no regrets for his snow angel celebration after sacking Colts quarterback Nick Foles late in the second quarter last Sunday on CBS, but neither of the broadcasters — Kevin Harlan/Trent Green — said a word about the Giants rookie’s mindless routine.

The “best” Harlan could do was say Thibodeaux “came in like a torpedo” to sack Foles who was left pained and prone on the turf before being carted off the field. Is it possible Green/Harlan 1) Didn’t see what the 6-5, 258-pound linebacker was doing? 2) Didn’t think there was anything wrong with the Goofball’s celebratory routine? 3) Didn’t have the onions to criticize Thibodeaux?

CBS did have a chance to rectify the situation during its halftime report when Colts-Giants highlights aired, but failed to. None of the esteemed panel said a discouraging word about Thibodeaux’s cold-hearted display.

While the football media had a come-together moment in the aftermath of Damar Hamlin’s on-field cardiac arrest, one analyst injected another form of reality into the conversation.

In case anyone forgot, Domonique Foxworth reminded them the football media is not always as concerned with the best interest of players, including health and safety issues negotiated during collective bargaining.

“I also remember people in the media who were outpouring and caring last night,” Foxworth, a former President of the NFL Players Association said on Tuesday’s edition of “First Take.” “They were calling us greedy [during negotiations].”

Foxworth said the Hamlin situation only reinforced the inequity of the NFL’s financial system and the cloak of danger it casts on all players.

“… As we were reminded last night, there is no limit on the risk of players,” Foxworth said, “but there’s a salary cap on what they can make.”

In the week leading up to Sunday’s game with Miami, Jets coach Robert Saleh has engaged in some whacked spin.

Like last Tuesday, during his paid spot on ESPN-98.7′s “The Michael Kay Show.” Kay asked Saleh if he thought beleaguered QB Zach Wilson is “fragile.” The coach verbally danced before concluding: “He [Wilson] is as tough as nails.” At the least, this contradicts what boss Jets scribes have been reporting on the state of Wilson’s confidence or lack thereof. The answer needed some follow-up. None was forthcoming.

Yet it’s not like either of Kay’s cohorts didn’t want to jump in. On the air Wednesday, Peter Rosenberg claimed he wanted to tell Saleh that he was talking “gobbledygook,” but was too old to be a “shock jock.” Don La Greca, said he “thought about jumping in too” but didn’t.

The trio then went on to criticize Saleh. There is a solution to this: Take it up with Saleh next week during his spot. Don’t hesitate. It’s the right thing to do.

On his Monday mid-day guest WFAN spot, Joe Benigno suggested Woody Johnson place a call to Sean Payton. Co-host Brandon Tierney responded, saying: “I said that on Dec. 23rd.” Who knew Tierney was keeping score? … During the same appearance, Joe B claimed Rex Ryan is using his ESPN gig to “lobby for the Jets job.” Not that Benigno sees anything wrong with that. With Ryan back on the Jets sideline, JB said: “Immediately, the Jets would have an identity.” And a Dr. Scholl’s sponsorship. … Throughout ESPN’s coverage of N.C. State-Maryland in the Duke’s Mayo Bowl, the crew reminded viewers to stay tuned to watch the winning coach get a vat of mayonnaise dumped over his head. Yet when it came time for Maryland coach Mike Locksley to be doused, viewers were told the mayo dump could only be seen on the ESPN app. Why was such a celebratory moment made so complicated? … Responding to a published report that he is considering retiring from his radio show when his ESPN-98.7 contract expires in September, Michael Kay told listeners: “When a decision is made, one way or the other, you, the listeners of the show will be the first to know. I can honestly tell you that no decision has been made.” And we can “honestly tell you,” the always-keep-them-guessing statement sounds like it came straight from Mike (Sports Pope) Francesa’s playbook.

Hosting live, trying to provide breaking news and perspective to the frightening Damar Hamlin story late Monday night on ESPN, SVP’s performance was enhanced. Saying he rose to the occasion is an understatement. Ryan Clark added greatly to the proceedings providing a player’s insight.

DWEEB OF THE WEEK: KAYVON THIBODEAUX

For his lack of class. Not only did the Giants rookie linebacker mock an injured Nick Foles with a snow angel celebration, but he refused to do the right thing (obviously not subscribing to the “Giants Way”). He didn’t show any remorse or apologize to the Colts QB. Foles suffered a rib injury while being sacked by Thibodeaux.

What Robert Saleh said: “It starts with knowing one’s self, call it ‘zen-ish’ if you want.”

What Robert Saleh meant to say: “It starts with knowing one’s self, call it ‘same old Jets’ if you want.”