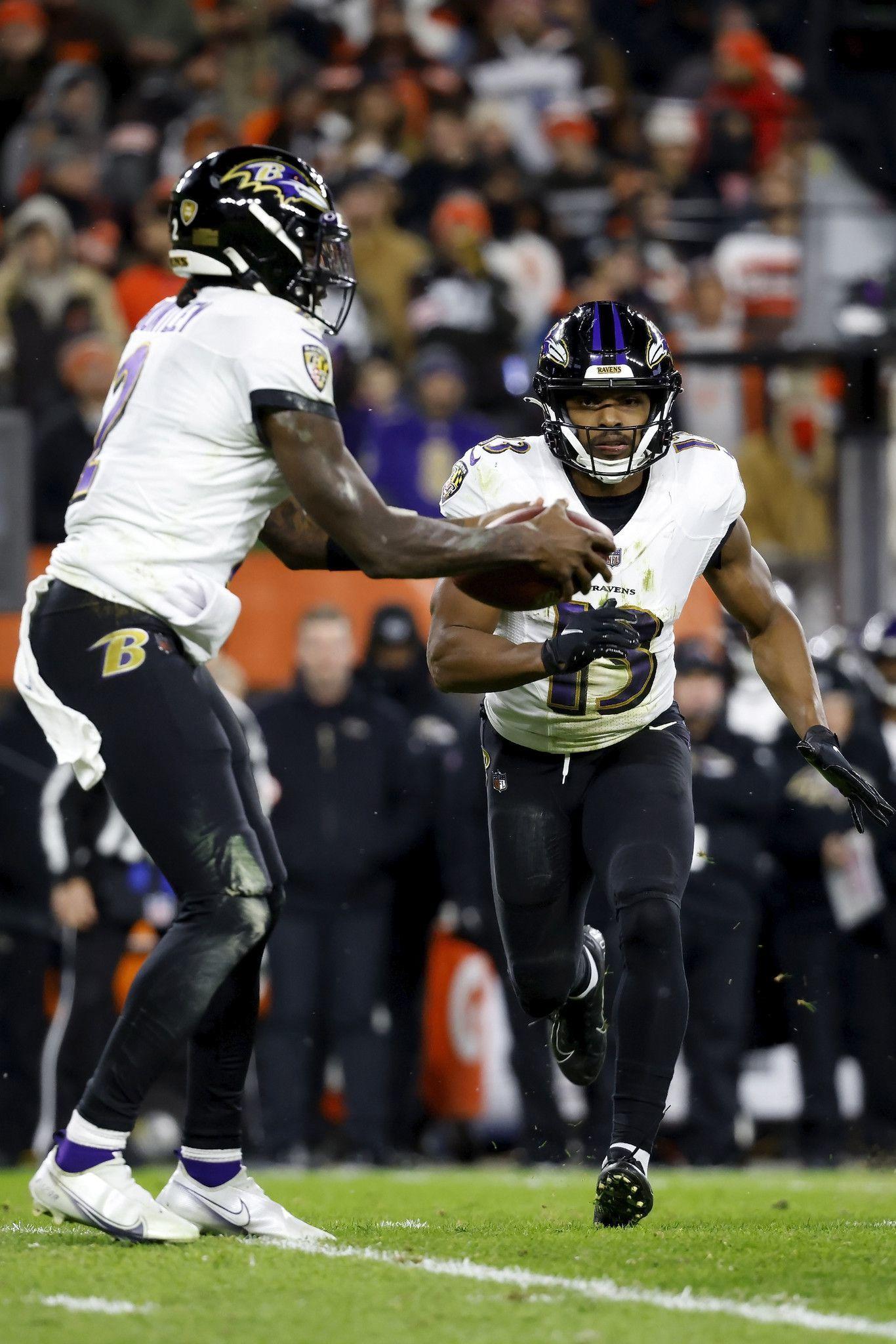 As John Harbaugh reflected on one of the Ravens’ worst offensive games of his tenure Saturday night, quarterback Tyler Huntley sat on a chair in a news conference room inside FirstEnergy Stadium, absorbing the weight of what was to come: questions about the defeat, about his red-zone interception, about the game plan.

The Ravens had just lost to the Cleveland Browns, 13-3, finishing with their fewest points in a regular-season game in 14 years. They’d scored just two touchdowns in the 11 quarters since Lamar Jackson was knocked out of a Week 13 win over the Denver Broncos with a knee injury. All of this despite having a marauding running game. Who or what could fix the offense?

“We have a heck of a quarterback sitting right here,” Harbaugh said, motioning to Huntley. “This guy knows what he’s doing. He plays with his heart. He’s very much capable of doing all the things that we need to do in the passing game. It’s not that; it’s everything else. We just have to improve on all of those things.”

There’s a lot of room for improvement. Over the past three weeks, the Ravens’ passing attack is 30th in the NFL in efficiency, according to Football Outsiders, and 31st in expected points added per play, according to TruMedia. (EPA is a measure of efficiency that accounts for situational factors such as down, distance and field position.)

Huntley in that span is 52-for-74 (70.3%) for 413 yards, no touchdowns and two interceptions (72.6 passer rating), hamstrung by missed reads, dropped passes, and far-from-ideal downfield spacing and separation. Now he and Jackson will also be without wide receiver Devin Duvernay, who was placed on injured reserve Tuesday with a foot injury.

As the Ravens (9-5) prepare for Saturday’s game against the Atlanta Falcons (5-9), they know there’ll be no change at offensive coordinator; Harbaugh gave Greg Roman a vote of confidence at Monday’s news conference. There could be a change at quarterback; if Jackson practices this week, he could return to action this weekend after two weeks of inactivity.

For now, the Ravens’ most urgent priority is their passing game production. There, something has to change. Here’s a look at what’s been missing since Huntley took over.

Under Huntley, there’s been a disconnect between the Ravens’ rushing success and their play-action failures.

When he’s been on the field, the Ravens have averaged 5.7 yards per carry and 0.18 EPA per rush, according to TruMedia, both of which would easily lead the NFL. The Chicago Bears rank first in yards per carry (5.4) this season, and the Philadelphia Eagles average an NFL-best 0.14 EPA per rush.

But the Ravens’ ground game production hasn’t translated to production off run fakes. While researchers have found little to no correlation between rushing success and play-action success, Huntley’s shortcomings are especially notable.

On his 18 play-action drop-backs, he’s 11-for-15 (73.3%) for 97 yards, no touchdowns and one interception (62.4 passer rating). On one first-and-10 play Saturday early in the second quarter against Cleveland, Huntley faked a handoff and had tight end Mark Andrews breaking to the sideline for a potential first down, fullback Patrick Ricard wide-open in the flat and tight end Josh Oliver wide-open over the middle, having leaked out after a block. Huntley threw a looping pass to Andrews that was knocked incomplete.

Play-action passes have long been an easy-money play call for the Ravens. But Huntley’s EPA per drop-back on them is minus-0.37, according to TruMedia, fourth worst among the 51 quarterbacks with at least 50 total attempts this season. Jackson ranks 15th.

“I’m not making any grand statements about it,” Harbaugh said Monday of the Ravens’ play-action game. “You expect those things to pop open, and we’ll be looking to try to get that done on Saturday, for sure.”

The Ravens’ two longest passes Saturday went for 19 yards. The first was a sideline throw to Andrews near the end of the first half that helped set up kicker Justin Tucker for his ultimately unsuccessful 48-yard field goal attempt as time expired.

The second was a relative rarity: a run-pass option. With the Browns stacking the box late in the third quarter, Huntley faked a shotgun handoff to Dobbins before throwing a quick-hitting screen to Duvernay, who cruised to Cleveland’s 35 behind Andrews and Ricard’s blocks. Three plays later, though, Tucker came on for his second missed field goal, this one a 50-yard attempt that was blocked.

For an offense with the Ravens’ structure, run threats and passing struggles, RPOs have sometimes been conspicuously absent. Against aggressive run defenses, they can be an effective countermeasure, punishing second- and third-level defenders who might be overly eager to make their run fits. But Jackson has passed just 23 times out of an RPO look this season, according to Sports Info Solutions, eighth most in the NFL, with 21 completions for 169 yards. Asked about the Ravens’ RPO tendencies in October, Roman pointed to the defenses they were facing.

“There are some teams that are playing certain coverages to maybe take away RPOs, and that’s fine with us,” he said. “We’re fine with that, but it’s pretty obvious that that’s what they’re doing. If that’s the case, then we move on to something else. It’s really that simple.”

If man-to-man coverage, which is generally less conducive to RPOs, was a deterrent then, it can’t be an excuse now. Huntley’s faced zone coverage on 76 of his 90 drop-backs over the past three weeks, according to Pro Football Focus. He’s thrown just four RPOs in that span.

And when Huntley has faced man-to-man coverage? It hasn’t gone well.

On his 13 drop-backs against man looks, Huntley is 3-for-8 for 20 yards, according to Pro Football Focus. Against the Browns, he was 1-for-5 for 6 yards. Huntley has taken advantage of defenses’ more aggressive coverages with his legs, scrambling four times for 27 yards. But with opponents rarely pairing their man coverage with a blitz, Huntley’s usually found a safety denying a field-flipping run downfield.

Because of the scrambling threat that Jackson and Huntley present, as well as league-wide defensive tendencies, the Ravens will likely see man-to-man coverage sparingly in the coming weeks. The Falcons, for instance, have one of the NFL’s highest zone rates this year.

But when defenses do test the Ravens with man coverage, the offense’s success (or lack thereof) will be as much a referendum on the players themselves as it will be on the coaching staff.

“I refer to man coverage as disrespect; that’s just how we talk,” wide receivers coach Tee Martin said in November. “It’s disrespectful to us in our room, and if you don’t think that way, something is wrong anyway. We see it as a challenge. It’s tough to play man against Lamar Jackson, because if you don’t pass rush with the right lanes, we can get explosive plays with him as well. So our tight ends do a great job versus man-to-man, our running backs are winning on the perimeter and running routes versus man. At wide receiver, we love that opportunity to go out and compete mano a mano against a person that feels like they can play us man-to-man.”