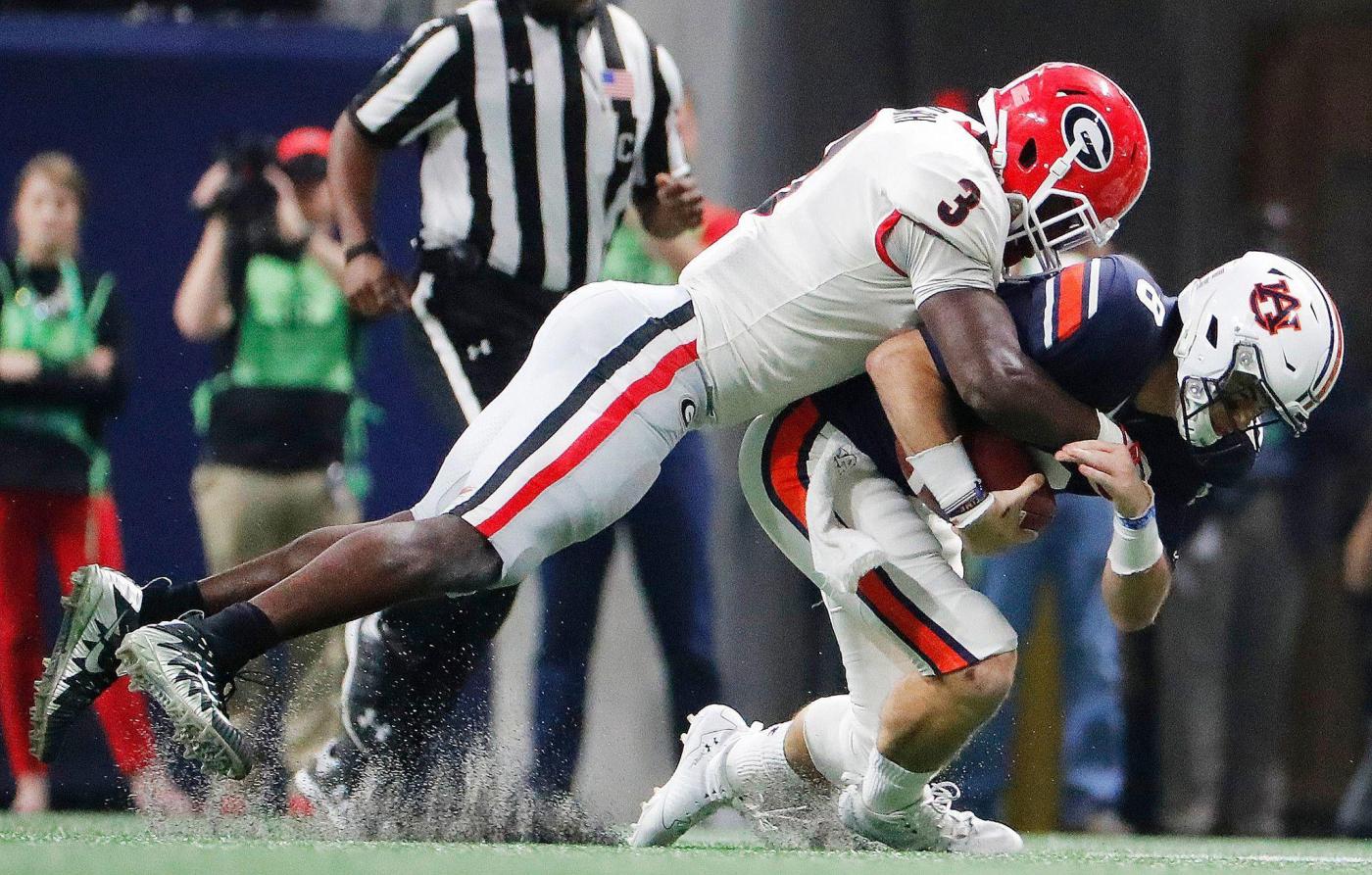 Eight minutes remained in the Chicago Bears’ Monday night game against the New England Patriots on Oct. 24 when rookie Dominique Robinson got his right hand on a Bailey Zappe pass and deflected it high into the air.

Smith took that interception, his second of the season and the seventh of his career, and returned it 15 yards. Then he took himself to the cameras behind the end zone at Gillette Stadium and began acting as if he were shuffling money out of his hands.

“I knew we had the game wrapped up,” Smith said, “and just let it rain a little bit.”

Figuratively, Smith had cashed in, capitalizing on an opportunity to make a big play in a big win in a big-stage game. His hope, deep down, was that such moments would help him cash in literally, allowing him to become one of the highest-paid linebackers in league history.

But that won’t happen with the team that drafted him. After a summer of strained contract talks that led to Smith’s public trade request more than two months ago, the Bears dealt Smith to the Baltimore Ravens on Monday.

With a second-round pick, a fifth-round selection and veteran linebacker A.J. Klein coming back from Baltimore, general manager Ryan Poles and assistant GM Ian Cunningham made another decision to sacrifice current success for the prospect of a brighter future.

By doing so, they removed one of the most talented players from the roster, deciding that Smith — a 25-year-old two-time second-team All-Pro recently voted as the 84th-best player on the NFL Top 100 list — was no longer a foundation piece in the team’s championship pursuit.

Was that decision primarily financial for Poles, with the first-year GM determining that a costly long-term extension for an inside linebacker was impractical to his plans?

Did Poles realize there was little way the Bears and Smith could reach a fair compromise in the appraisal of his skills?

Or was this simply another opportunity for the Bears to add draft currency to their wallet for next spring, even if it meant sending a proven young playmaker out the door?

Trading Smith on Monday, a week after the Bears’ biggest win of the season and a day after a defensive unraveling in a blowout loss to the Dallas Cowboys, created a long list of questions. There’s plenty to consider about how this deal will affect the Bears, what it means for Smith and what’s next as the franchise continues steering in a new direction.

Here are five questions worth pondering.

1. Are Poles and Cunningham considering additional deals before the league’s trade market closes?

The deadline is 3 p.m. Tuesday, and the buzz inside league circles after Smith’s exit was that the Bears might not be finished. As one league source noted, if Poles was willing to deal away another of the team’s best players and a respected team captain in Smith, the Bears should anticipate incoming calls regarding just about anyone on their roster. That’s the signal others in the league saw beaming from the roof at Halas Hall on Monday.

Perhaps Poles and Cunningham were making a bunch of calls themselves to stimulate conversations about other quality players.

Running back David Montgomery, in the final season of his rookie contract, qualifies as a trade candidate about whom the Bears might listen to offers. Montgomery is averaging 3.9 yards per carry this season and has been a key cog in the league’s No. 1 rushing attack. He is also a tone-setting worker behind the scenes who embodies the culture Poles and coach Matt Eberflus are trying to establish.

But with second-year running back Khalil Herbert emerging this season with 6.2 yards per carry and a team-best 563 rushing yards, Montgomery might not be untouchable if a suitor came knocking with an appealing trade package.

Safety Eddie Jackson, the final link to the Bears’ championship defense of 2018, also has been at the center of trade speculation the last couple of weeks. But Jackson is having a strong bounce-back season with four interceptions. He has become an influential mentor to rookie Jaquan Brisker and was promoted last weekend to become a team captain for the rest of the season. So the idea of moving Jackson seems less likely.

Trade chatter was also prevalent in July and August regarding offensive lineman Teven Jenkins, enough so that Jenkins expressed uncertainty about his job security even after the Bears kept him on the 53-man roster at the end of the preseason. Poles said he later spoke directly with Jenkins to put his mind at ease. But in this league? With the Bears at this stage of a sell-off? Never say never.

2. How will trading Smith affect the Bears locker room?

If you need a reminder of what Smith meant to Bears defensive players, consider what they were saying about him in August immediately after he ended his training camp “hold-in” and returned to practice.

“Everybody has a different sense of confidence when he’s out there,” cornerback Jaylon Johnson said.

Added Jackson: “It’s like a missing piece to the puzzle. Now you’ve got all your pieces. Everybody’s here. It’s like, ‘All right, let’s go!’”

Johnson knows Monday’s move leaves the Bears with another leadership void and, in his words, will require others to help replace Smith’s “it factor.”

“He’s definitely not somebody you can just replace,” Johnson said on “The Parkins & Spiegel Show” on WSCR-AM 670 on Monday afternoon, just a couple of hours after the trade. “He’s not somebody who can be duplicated. He is who he is. And we lost a big thing today.”

That’s where the trade really rocks the boat, with potential to undermine all the buy-in Eberflus and Poles have obtained from players over the past nine months. For a coach who puts a daily emphasis on his H.I.T.S. principle and pushes his team to be an effort-based group, it will be interesting to see how Eberflus retains the attention of the room with this newest declaration from the front office that the results of this season don’t mean a ton.

With Smith gone, the Bears instantly become less competitive overall. And when a bottom-tier team becomes less competitive, human-nature disinterest comes charging to the door, requiring a pack of trusted leaders to serve as bouncers to keep it from getting in.

Johnson is one such player the coaching staff and front office will lean on to keep setting a proper tone. Even he acknowledged, though, that the team’s chances of success have diminished in the last week with the trades of Smith and Robert Quinn.

“It was difficult to win with those guys,” Johnson said. “Of course now that their presence isn’t going to be on the field, it definitely makes it a lot harder. Those are great players.

“But at the end of the day, there’s more to it, I feel like, than just trading and giving guys away. I don’t think it’s ever as simple as that. I feel like there are decisions that need to be made that aren’t easy decisions, and I feel like the front office is doing what they feel is best for the future of the Bears organization.”

Some Bears players will recalibrate their minds to trust in Poles’ vision. Some might not.

Don’t be surprised if there’s a dip in focus and investment in the weeks to come. Business decisions soon might take precedence for some players over team-first, all-in sacrifice.

Injured players, for example, now have less incentive to rush back to play for a team that isn’t devoting its resources to this season’s success — albeit for understandable reasons.

Planning for the future sometimes comes with a present-day cost.

Smith joins a 5-3 Ravens squad that sits in first place in the AFC North and has the league’s 24th-ranked defense. His first game will come in New Orleans against the Saints — once again on the “Monday Night Football” stage.

The bigger-picture question is how Ravens GM Eric DeCosta sees Smith fitting into his team’s future beyond this year. Sending away two draft picks plus a veteran defender is a high price to pay for a nine-game rental of an inside linebacker. So you would imagine DeCosta has thought through his options of how to handle extension talks with Smith.

Will DeCosta be willing to give Smith a new deal with a total value of more than $100 million and an annual average near $20 million? Would he consider using the franchise tag next spring — currently estimated at about $17.5 million — either to buy more time in negotiations or to exercise a handy 2023 tool? Would he let Smith walk in free agency with the likelihood the Ravens would recoup a third-round compensatory pick in 2024?

Whatever the case, DeCosta’s handling of Smith’s contract will be worth monitoring from afar as the standout linebacker gets his first opportunity to see how another organization values him.

4. How much did Smith’s training camp discontent affect his relationship with Poles and the Bears front office?

There’s no question that contract disagreements became tense enough to cause a fracture. When summer extension talks stalled, Smith’s hold-in approach for the opening of camp came as a surprise to his bosses.

Still, that was something the team thought it could handle gracefully. Then on Aug. 9, Smith issued a trade request through NFL Network’s Ian Rapoport while accusing the Bears of refusing to negotiate in good faith and attempting to take advantage of him.

“As of right now, I don’t see a path back to the organization I truly love,” Smith wrote in a statement, while also making a plea to the McCaskey family to salvage things.

That tactic seemed to agitate Poles. And even after Smith returned to practice and pushed his contract squabble to the side, he held strong to a belief that the negotiations had been “distasteful.”

“I feel like I’ve busted my ass for so long here and (was) not being rewarded with something I thought I rightfully deserved,” Smith said Aug. 20.

A week before the season, Poles acknowledged his relationship with Smith needed repair.

“When things happen and two sides don’t agree on something, it’s going to take a little time to do that,” he said. “I’ve got a lot of faith that’s going to happen. And I’m excited for it.”

Smith, meanwhile, expressed his intent to play out the final year of his contract.

“And whatever happens, happens,” he said. “Whatever it is I have to go through this season, I’ll do it chin up, chest out. Sun sets, no regrets, baby.”

On Monday, the sun set on Smith’s time as a Bear. He’s off to Baltimore now, the latest in a long line of Bears first-round picks who didn’t become the long-term star for the organization that they envisioned. The last Bears first-round pick to earn a second contract with the team was cornerback Kyle Fuller, who was drafted by former GM Phil Emery in 2014

The Bears own nine selections with the return from the Smith trade added to the fourth-round pick they got from the Philadelphia Eagles in last week’s Quinn trade. They now have two picks in Rounds 2, 4 and 5 and their original selections in Rounds 1, 3 and 7. Former GM Ryan Pace traded away their sixth-round pick for 2023 in an October 2021 deal to acquire receiver/returner Jakeem Grant.

In addition to the draft currency the Bears have added, they are projected to have more than $100 million in salary-cap space when the new league year begins in March. That should make Poles a busy man during free agency and the draft, with plenty of flexibility and freedom to continue molding the Bears roster to fit his vision.

That means the talent evaluation staff, on both the pro and college scouting sides, must do a lot of heavy lifting through the rest of this season and into the winter and spring.