Todays Though > News > Is the Patriots offense broken heading into the bye?
News

Is the Patriots offense broken heading into the bye? 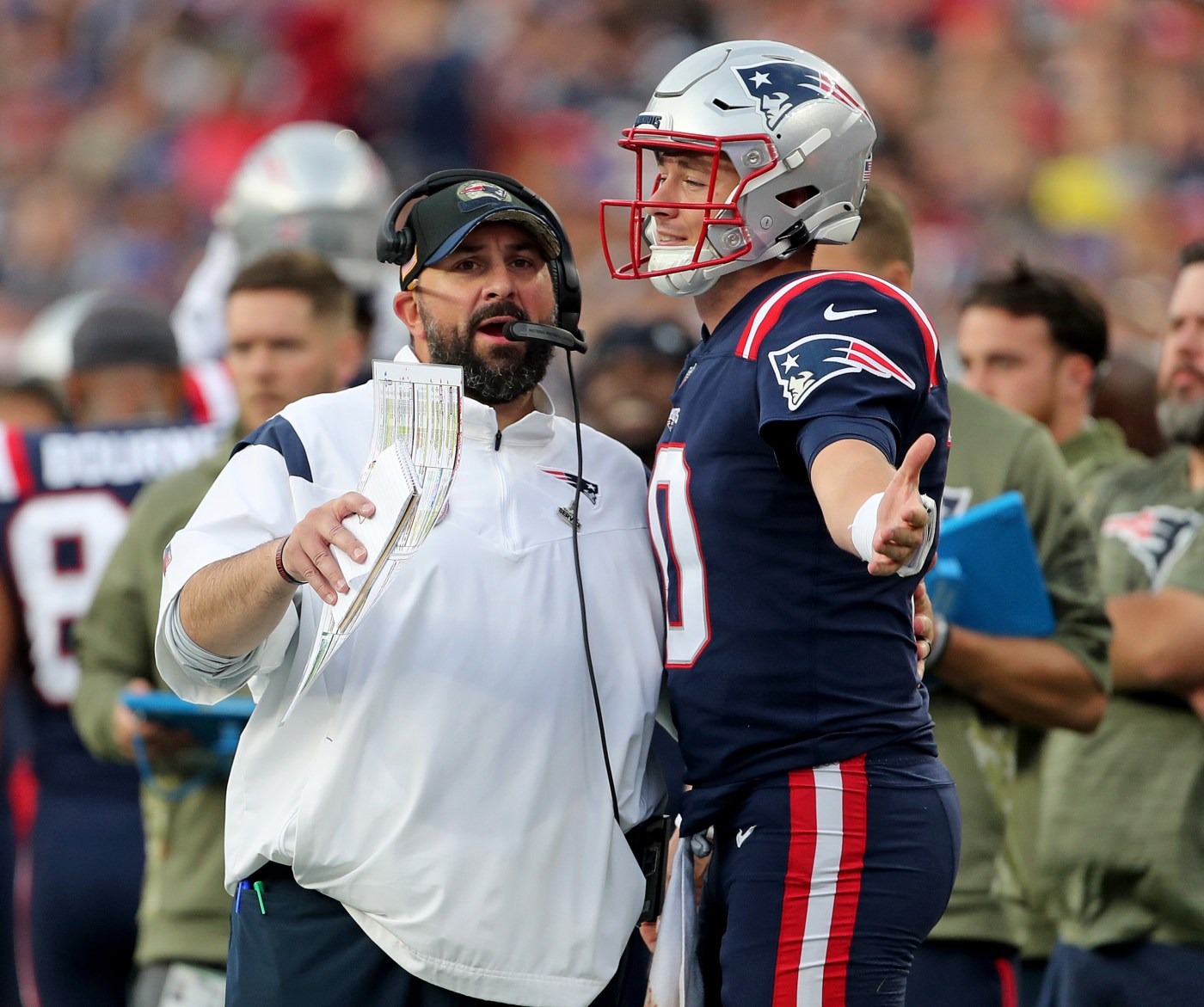 FOXBORO — Heading into the bye week, what’s the best way to describe Mac Jones and the Patriots offense?

While the Patriots slipped above .500, producing a much-needed win over the Colts, there’s still plenty to worry about on one side of the football as the team heads for a break.

Nine games in, it’s hard to feel very confident about what we’re watching when it comes to Jones, and by extension, the offense.

Watching them from one series to the next has almost become as irritating as fingernails scraping on a chalkboard.

Jones continues to regress, continues to look uncomfortable in the pocket. Of course, it doesn’t help that his offensive line is woeful, and doesn’t measure up against the better defensive lines. Much of Jones’ pocket jitters are the result of constantly having pressure and pass-rushers in his grill.

But even when there’s time, Jones’ two best assets – his mind and accuracy – have been lost in the shuffle.

And play-caller Matt Patricia doesn’t seem to know what to do to fix it. The offense is basic, boring, predictable.

There’s one word for that, too: Yuck!

Don’t be fooled by the 26-3 score. One touchdown was scored on a pick-six by Jonathan Jones. And the other touchdown came after Jones set up the offense on the three-yard line after a blocked punt.

So counting that, the Patriots offense is basically Nick Folk.

He added four more field goals to the five he had the previous week against the New York Jets.

Yes, the Patriots have gotten the job done for two straight weeks, but it’s hard to believe the offense will be able to carry the day against Cincinnati, Buffalo (twice) and Miami following the bye week.

Winning isn’t sustainable when the offense consists of running the ball and throwing check-downs. At the outset, it seemed as if this might be a good game to get Jones and the offense back into a rhythm.

But Jones & Co. could do next to nothing against Gus Bradley’s Cover-3 defense, the same type of defense the Patriots used to pick apart at will with Tom Brady under center.

While Jones hit on 20 of 30 passes, the sum total of those completions was 147 yards. The longest play from scrimmage was a 30-yard completion to Hunter Henry. Take that away, and the Pats gained under four yards per pass play.

That’s not going to get it done after the bye. And the players know it.

“I think there was a lot of plays left out there. We just gotta be better,” said tight end Jonnu Smith. “You look at the score of the game, and you’d think there’s a lot of complementary football. But from the offensive side of things, we know there was a lot of meat left on the bone … we have to capitalize when the opportunities present.”

If there’s one bit of good news, Jones stopped his interception streak. He had thrown at least one pick in each of his past six games (dating back to last season), which was the longest active streak in the NFL.

But that came to an end, which was one positive takeaway.

His receivers (Jakobi Meyers, Kendrick Bourne) on the other hand, put the ball on the ground twice, losing just one, so the turnovers continue.

And so does an impotent offense, as the Patriots gained just 203 yards of offense overall. It was the fourth time, since 2010, the Patriots totaled that amount or fewer.

“I think we definitely want to move the ball. And when we get the ball as an offense, we want to score on every possession, and we want to score touchdowns,” said Jones. “And sometimes when we don’t do that, we get a little frustrated, myself included. But at the end of the day, it’s about controlling the ball.

“When we don’t turn the ball over, our statistics are really good to win the game.”

In other words, take what the defense gives you, don’t make mistakes, and that’s a good place to start.

That all sounds good. But it sure doesn’t look good.

Fortunately for the offense, the defense and special teams rose to the occasion against a Colts football team that just isn’t very good.

Rhamondre Stevenson also fought for every inch of the 60 yards he gained rushing on 15 attempts. He also caught Jones’ lone touchdown pass with a terrific one-handed grab with the Patriots facing a second-and-goal from the three.

The Patriots defense, thankfully, rolled. As many suspected, Sam Ehlinger, who was making his second NFL start, was no match for Bill Belichick. Actually, he was no match for the pass rush, which got to Ehlinger for nine sacks.

But even given all the good field position from the defense, from blocked kicks, and from Marcus Jones returning punts, the offense sputtered.

Jones & Co. constantly faced second-and-long, or third-and-long, and had a hard time converting (6-for-17 on third down).

“We just gotta finish better, execute better,” said Bourne, who had three catches for 11 yards. “Obviously, we’re just not finishing especially after the position the defense put us in. We just need to finish better. Hopefully this bye week, we can draw some stuff up, and score more touchdowns.”

Jones, who was sacked four times and harassed countless other times, needs more time in the pocket. Not having it has led to him being sped up, and in salvage mode, just trying to avoid making a mistake.

He also isn’t trying to gain extra yards for fear of being hit and fumbling, or getting hurt again. He made sure to slide well before being hit. So obviously, he’s well aware of the turnover bugaboo.

After the game, Jones tried to sound upbeat, and confident he and the offense would eventually figure it out.

“We want to play our best team ball. Our defense and special teams are playing really well,” said Jones. “We’re playing good at spots, but we need to continue to go up here and stop riding the wave, you know, which we will.”

“It’s the bye week, I’m sure we’ll address all of those issues and get back on track,” said the tight end. “Hey, I would rather have a win like we did today, than have 500 yards of offense and lose. But there’s a lot of football left, and a lot of improvement for us to achieve.”

That much is obvious.