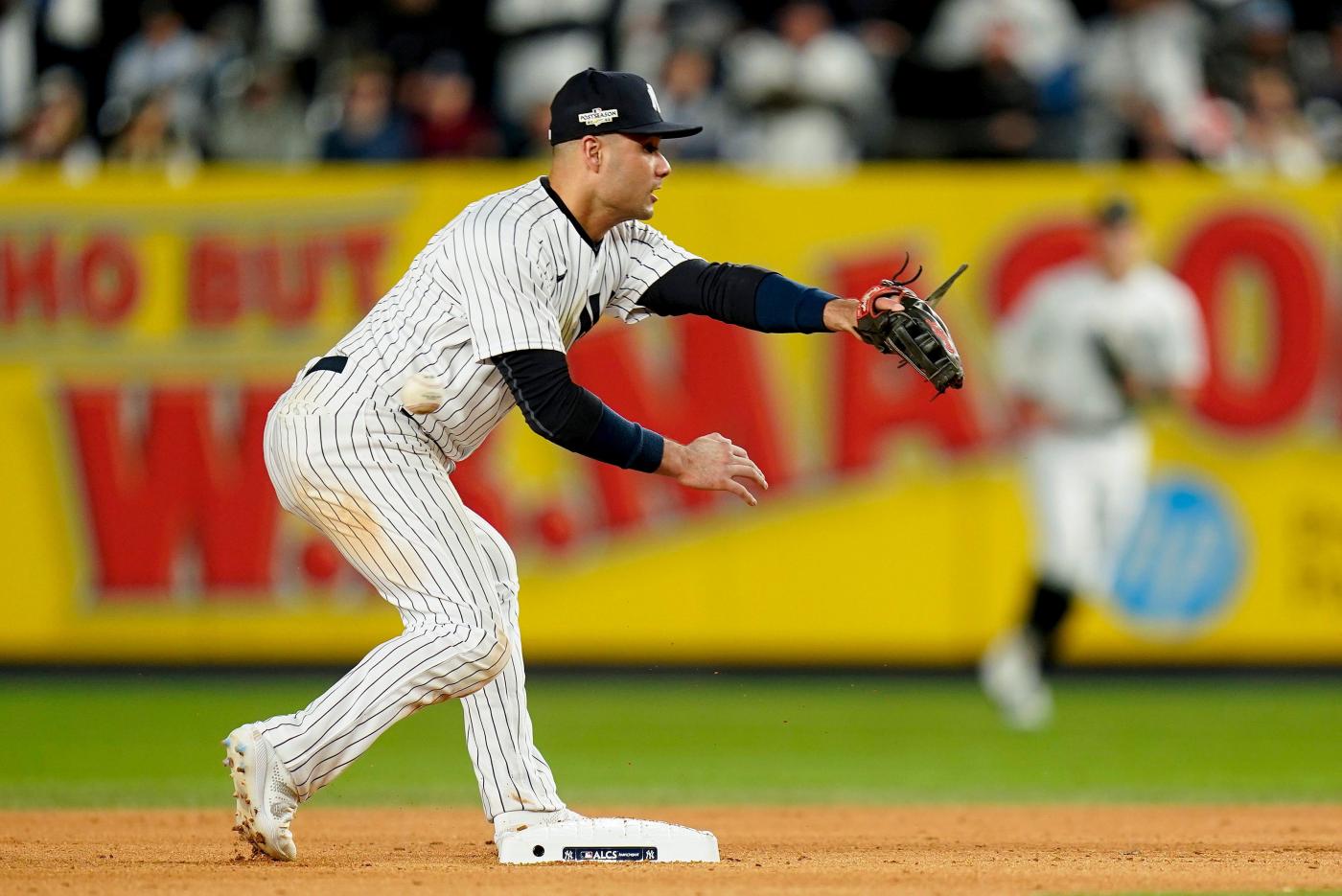 Yet another defensive misplay doomed the Yankees in the 6-5 loss to the Houston Astros on Sunday night at Yankee Stadium. This time, Isiah Kiner-Falefa wasn’t charged with the error, but may still be partially to blame.

With one out and one on and the Yankees up 5-4 in the seventh inning of Game 4 of the ALCS, Jeremy Peña hit what should have been an easy double-play ball. Second baseman Gleyber Torres bobbled the flip to Kiner-Falefa at the bag and the runners were safe. Yordan Alvarez then singled to right to score Jose Altuve from second to tie the game. There was some debate as to whether it was Torres’ fault for not flipping it properly or whether Kiner-Falefa was ready to receive. Regardless, it was yet another mistake the Astros were able to take advantage of. A pitching change and a go-ahead single by Alex Bregman later, the Yankees were once again trailing.

“I was covering second base, it was a little off the line and I wasn’t able to catch it. It was too far away with the runner going up the line,” Kiner-Falefa said. “So there’s nothing we could really do about it. It’s a tough, tough situation.”

This was the second time in as many games an easy out became an error and the error resulted in two runs. The Yankees defense was somewhat defenseless throughout the postseason with bloop hits, fly balls and routine groundouts ending in disaster. The outfield was down Andrew Benintendi and Aaron Hicks was injured in Game 5 of the ALDS, forcing Giancarlo Stanton to play in left field for the first three games of the ALCS.

But Kiner-Falefa’s defense has been scrutinized all season. With a top crop of shortstops on the free agent market last winter, the Yankees instead took a half-measure and acquired Kiner-Falefa from the Minnesota Twins. He seemed to struggle with the spotlight in New York and was benched late in the season and twice in the playoffs.

Still, he was happy with his performance in Game 4, going 1-for-3 with a run.

“I thought I bounced back from being benched,” he said. “It’s a tough, tough place. And I was able to make the routine plays and whatnot. I could have folded and let things beat up on me or could have just sat on the side and not worked. But after I got benched, I was out there early every day. Just wanted to help the team in any way possible. I had an opportunity in Game 1 and Game 4 and I was able to play good defense — way better than the LDS — and swing it when I had the opportunity.”

The 28-year-old Kiner-Falefa has one more year of team control left but he knows he may have fallen out of favor in the Bronx. The club has Peraza and Anthony Volpe coming up and they may choose to go in another direction with someone like free agent Carlos Correa.

Though fans might remember him for the October defense, Kiner-Falefa is happy with the character he felt he displayed in what could have been his final game in pinstripes.

“I’m definitely happy with not giving up and still working, even though I could have just quit and sat on the side and just been a grump and, and whatnot,” he said. “I was just happy that I kept my head up and just waited for another opportunity and didn’t botch any balls tonight.”