Todays Though > News > ‘It was simple mistakes, but they cost us big’ – Boston Herald
News

‘It was simple mistakes, but they cost us big’ – Boston Herald 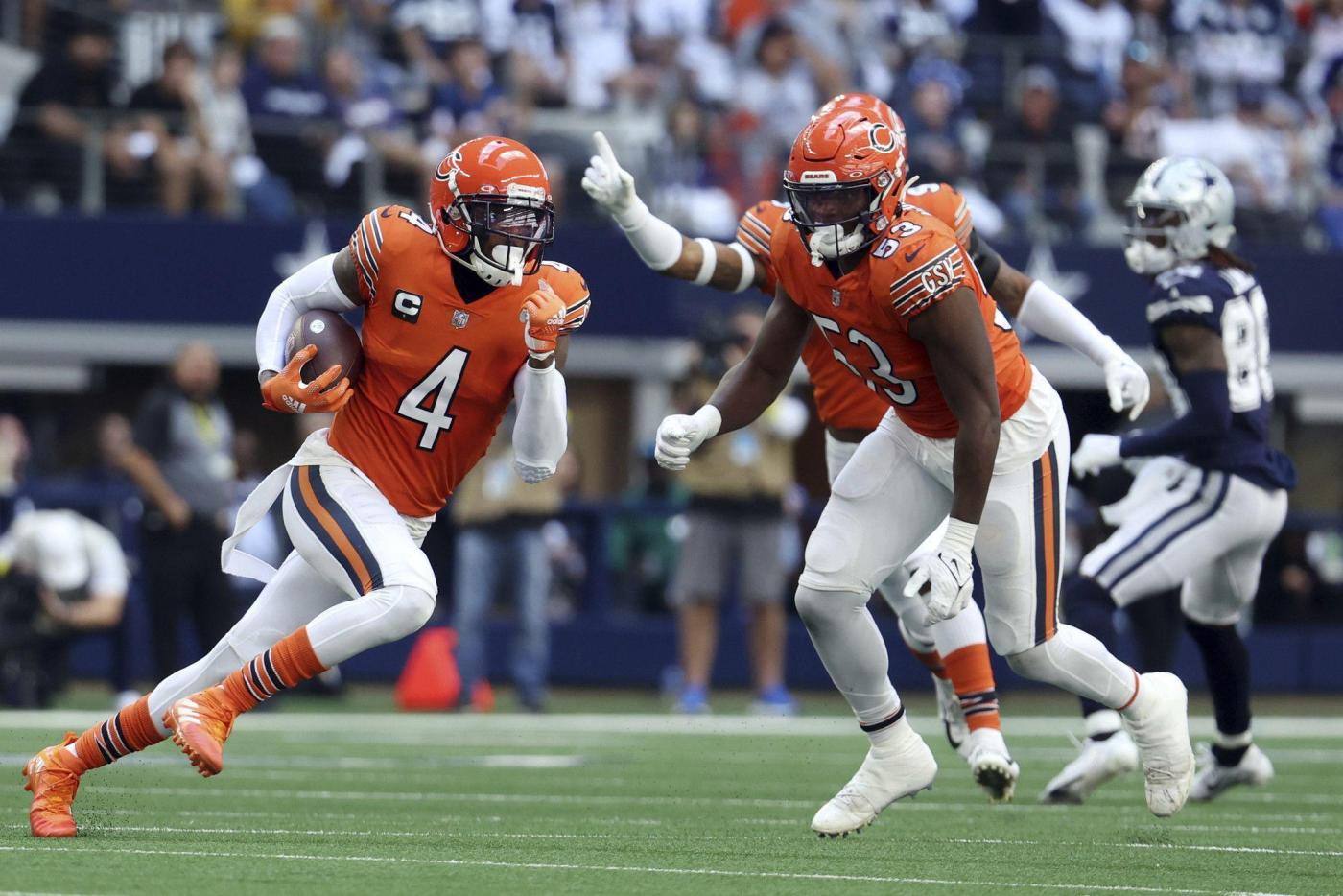 Of the many stats that showed the inability of the Chicago Bears defense to stop the Dallas Cowboys on Sunday at AT&T Stadium, here’s one that didn’t make the game book.

In the visitors locker room after the Cowboys’ 49-29 victory, Bears linebacker Roquan Smith used the word “embarrassing” three times and “unacceptable” three times, with one “inexcusable” and one “frustrating” mixed in.

“That’s what it is — it’s embarrassing,” Jackson said. “The offense put up (almost) 30 points. It’s like, what more can you really expect?”

On an afternoon when the Bears offense showed continued signs of growth, the defense was nearly powerless from the start to stop quarterback Dak Prescott and running back Tony Pollard.

The Cowboys got in the end zone on their first four drives and 6 of 9 overall before the final kneel-down. They punted twice, and Jackson intercepted Prescott on the other drive, one of the few big plays from the defense. The Cowboys converted 9 of 11 third downs, with Bears coach Matt Eberflus saying the Cowboys had too many third-and-short situations.

“Everyone has to look themselves in the mirror and we just have to grow from this and get better,” Smith said. “Because there were mistakes out there. It was simple mistakes, but they cost us big.”

Prescott was playing in his second game after a thumb injury kept him out for five games, but he didn’t show any of the rust he had in Week 7. He completed 21 of 27 passes for 250 yards and two touchdowns and rushed for 34 yards and a touchdown.

“There was nothing where we said, ‘Oh, they can’t handle it,’” Cowboys coach Mike McCarthy said of going up-tempo. “It was just really we’ve been averaging, what, 58 plays a game? So we wanted to get up and get as many punches as possible regardless of who the opponent was. I think it speaks to the confidence that we have as an offense.”

While the Cowboys showed injured running back Ezekiel Elliott cheering on the sideline on their massive video board above the field, Pollard made sure they hardly missed Elliott. Pollard rushed for 131 yards and three touchdowns on 14 carries — 9.4 yards per carry.

Pollard’s 54-yard touchdown run on third-and-1 early in the fourth quarter was the Cowboys’ final dagger. Jackson got behind the line of scrimmage to chase Pollard, but Jackson and Smith got tripped up on each other. Pollard left linebacker Nicholas Morrow diving at his ankles at the 50-yard line and safety Jaquan Brisker grasping at his feet at the 5.

It was far from the only time Pollard evaded Bears defenders, including a nasty cut to get by Jackson on an 18-yard, second-quarter touchdown run.

“He’s a shifty guy, speedy guy,” Jackson said. “Hits holes, gets to the second level good and tries to make guys miss. Today he did that. We saw that on film, what he does. We didn’t do a great job keeping him under control.”

The Bears defense had an emotional week. After a 33-14 upset victory over the New England Patriots on Monday, general manager Ryan Poles traded respected veteran and team captain Robert Quinn to the Philadelphia Eagles on Wednesday. Bears players admitted during the week that the trade was tough for them on and off the field.

But Jackson, who was named a captain to replace Quinn, wasn’t using that as an excuse.

“I’m not going to blame this on that,” Jackson said. “We’ve got a job to do as men. We’ve got to come out here and prepare well and we’ve got to execute. I felt like today it wasn’t good execution.

“To come out and let them score the first (four) drives, that’s not us. So we’ve got to get that fixed — and fast.”

Jackson’s fourth interception of the season — on the drive after a Justin Fields touchdown pass — seemed to give the Bears momentum going into halftime. Kicker Cairo Santos made a field goal to cut the Cowboys lead to 28-17.

But after the Bears cut that lead to five points in the third quarter, the Cowboys put together a 75-yard touchdown drive, fueled by Prescott hitting tight end Dalton Schultz for 30 and 14 yards. Pollard capped it with his second touchdown run, a 7-yarder.

Three plays later, linebacker Micah Parsons returned a fumble 36 yards for a touchdown to swing the momentum solidly back in the Cowboys’ favor.

The performance came after the Bears held the Washington Commanders and New England Patriots to 12 and 14 points in back-to-back weeks. Eberflus stressed that Bears defenders need to get back to fundamentals as they look to bounce back from the rough outing.

“I told the guys after the game, guys are going to look at the tape and you’re going to see it. You’re going to see there’s no mystery here. It’s about good fundamentals, technique. And you’ve got to do that down in and down out to play good defense.”