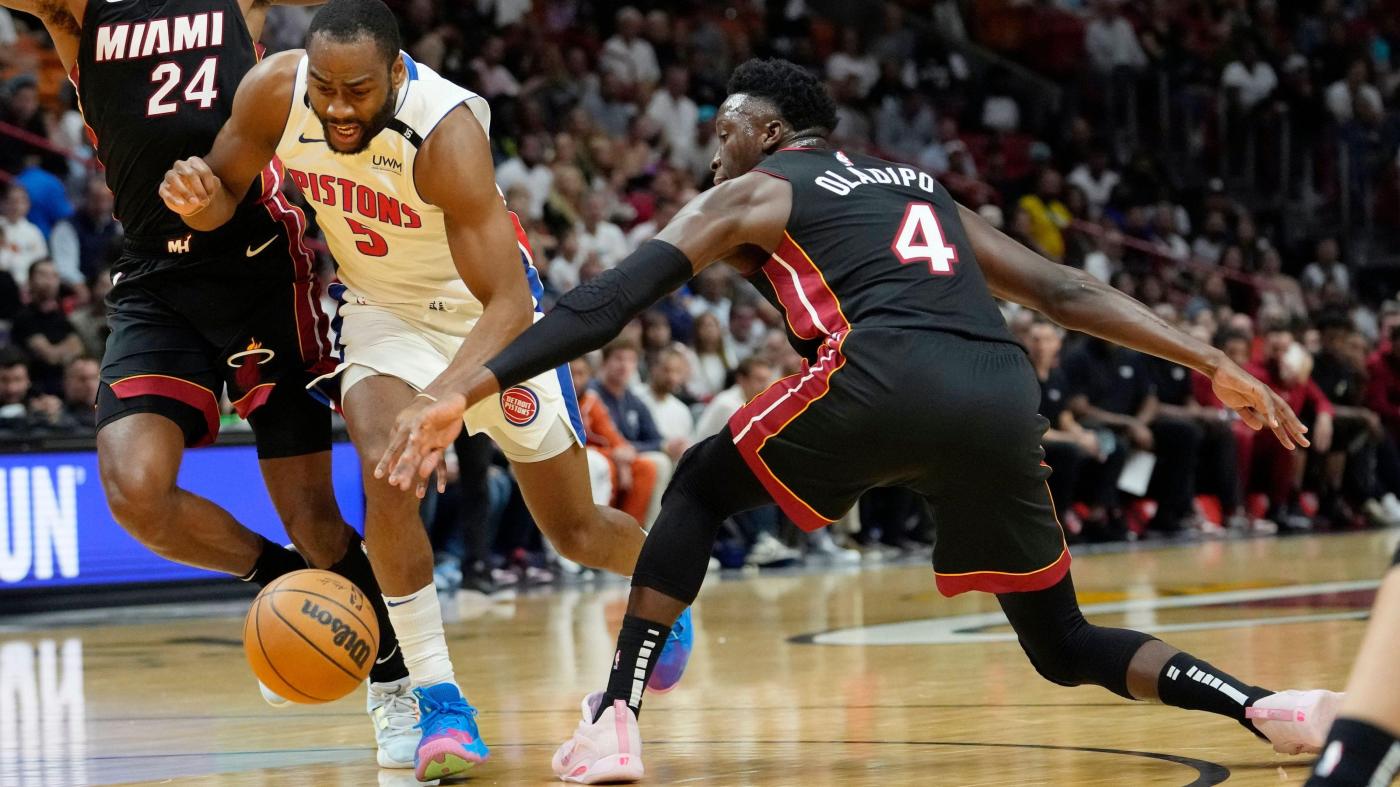 Observations and other notes of interest from Tuesday’s 116-96 loss to the Detroit Pistons:

– It is going to take more than the return of Victor Oladipo.

– Because this Miami Heat bench is not very good.

– Not good enough at all.

– Yes, the Heat were without Gabe Vincent and Dewayne Dedmon.

– And, yes, that limited the bench.

– But both also have struggled this season.

– This is the toll exacted by moving Tyler Herro and Caleb Martin into the starting lineup.

– With the depth simply not there this season for Erik Spoelstra’s team.

– Which was the case again Tuesday night.

– But that clearly will take time.

– And maybe they miss Omer Yurtseven more than thought.

– But right now, when it comes to the Heat bench, there’s hardly any there there.

– With luxury-tax prudence very much part of the equation.

– With Jimmy Butler given the night off for rest, Max Strus moved back into the starting lineup.

– Expected to play as sixth man this season, Strus has now started 14 games and played nine off the bench.

– The starting lineup was rounded out by Bam Adebayo, Martin, Kyle Lowry and Herro.

– Lowry remains the lone Heat player to appear in every game this season.

– Still without much in the way of trust.

– And then Oladipo in his season debut.

– Duncan Robinson, who had been held out of the previous two games, made it nine deep.

– Adebayo’s first assist moved him past Sherman Douglas for seventh on the Heat all-time list.

– Adebayo’s first defensive rebound moved him past Chris Bosh for sixth on the Heat all-time list.

– Strus’ second 3-point attempt moved him past Keith Askins for 17th on the Heat all-time list.

– Lowry’s fourth steal moved him past Dominique Wilkins for 64th on the NBA all-time list.

– Martin’s first 3-point attempt was the 400th of his career.

– Spoelstra said the time was right for Oladipo’s return.

– “Obviously he’s been really ramping it up in the last few weeks,” he said. “I think it’s been appropriate.”

– “There will be some, I don’t want to say minute restriction, but he’s certainly not going to play full, normal game minutes,” Spoelstra said.

– Spoelstra added, “I think this process will continue for the next X-amount of whatever.”

– Without Vincent, the only current relief for Lowry is two-way neophyte Dru Smith.

– And without Dedmon, the only relief for Adebayo basically is no one, with Yurtseven recovering from ankle surgery.

– Such is life when carrying Udonis Haslem and prioritizing remaining below the luxury tax.

– Casey, on Lowry, who he coached in Toronto, “He’s stubborn, which if he wasn’t stubborn, he wouldn’t be the great player he is.”

– Floyd Mayweather Jr. was among those in attendance.

– As was Weston McKennie.