Italy shifts to the right as voters reward Meloni’s party 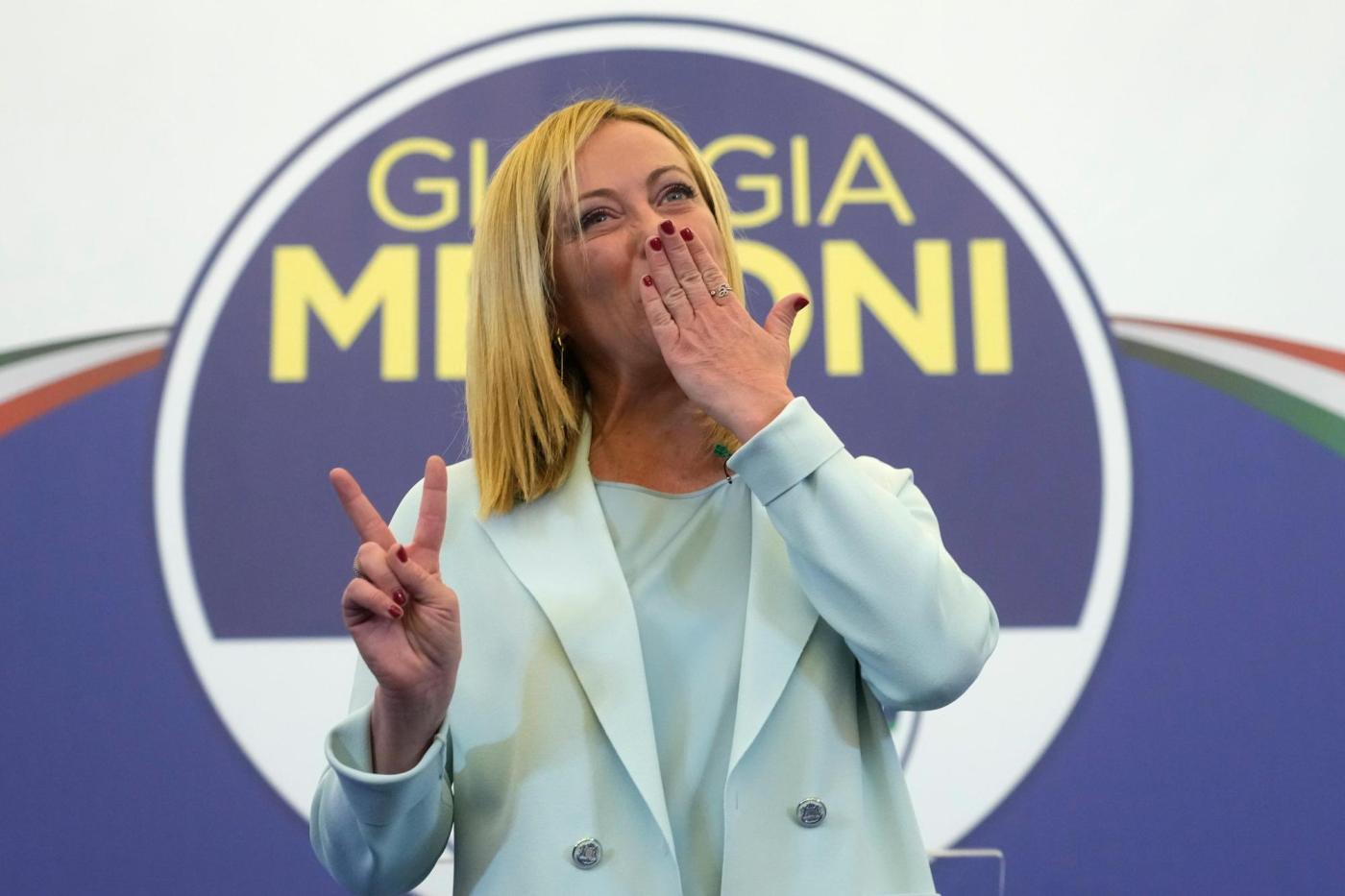 ROME (AP) — A party with neo-fascist roots won the most votes in Italy’s national election, setting the stage Monday for talks to form the country’s first far right-led government since World War II, with Giorgia Meloni at the helm as Italy’s first female premier.

Italy’s lurch to the far right immediately shifted Europe’s geopolitics, placing Meloni’s euroskeptic Brothers of Italy in a position to lead a founding member of the European Union and its third-largest economy. Italy’s left warned of “dark days” ahead and vowed to keep Italy in the heart of Europe.

Right-wing leaders across Europe immediately hailed 45-year-old Meloni’s victory as sending a historic, nationalist message to Brussels. It followed a right-wing victory in Sweden and recent gains by the far-right in France and Spain.

Still, turnout in the Italian election Sunday was a historic low of 64%, and pollsters suggested voters stayed home in protest, disenchanted by the backroom deals that had created the country’s last three governments and the mash-up of parties in outgoing Premier Mario Draghi’s national unity government.

By contrast, Meloni was viewed as a new face in the merry-go-round of Italian governments and many Italians appeared to be voting for change, analysts said.

The victory of Meloni’s just 10-year-old Brothers of Italy was more about Italian dissatisfaction with the decades-long status quo than any surge in neo-fascist or far-right sentiment, said Nathalie Tocci, director of the Rome-based Institute of International Affairs.

“I would say the main reason why a big chunk of (voters) … will vote for this party is simply because it’s the new kid on the block,” she said.

The election’s sharp swing to the right, “confirms that the Italian electorate remains fickle,″ said London-based political analyst Wolfango Piccoli, noting that an estimated 30% of voters went for a different party than their choice in 2018 elections.

Meloni, whose party traces its origins to the postwar, neo-fascist Italian Social Movement, tried to sound a unifying tone, noting that Italians had finally been able to determine their leaders.

Near-final results showed the center-right coalition netting 44% of the parliamentary vote, with Meloni’s Brothers of Italy snatching 26% in its biggest win in its decade-long meteoric rise. Her coalition partners divided up the remainder, with the anti-immigrant League party led by Matteo Salvini winning 9% and Forza Italia of ex-Premier Silvio Berlusconi taking around 8% of the vote.

The center-left Democratic Party and its allies had around 26% support, while the populist 5-Star Movement — which had been the biggest vote-getter in the 2018 parliamentary election — saw its share of the vote halved to 15%.

While the center-right was the clear winner, the formation of a government is still weeks away and will involve consultations among party leaders and with President Sergio Mattarella. In the meantime, Draghi remains in a caretaker role.

The elections, which took place six months early after Draghi’s government collapsed, came at a crucial time for Europe as it faces Russia’s war in Ukraine and related soaring energy costs that have hit ordinary Italians as well as industry.

A Meloni-led government is largely expected to follow Italy’s current foreign policy, including her pro-NATO stance and strong support for supplying Ukraine with weapons to defend itself against Russia’s invasion, even as her coalition allies take a different tone.

Both Berlusconi and Salvini have ties to Russian President Vladimir Putin. While both have distanced themselves from his invasion of Ukraine, Salvini has warned that EU sanctions against Moscow are hurting Italian industry. Berlusconi has even excused Putin’s invasion as an event foisted upon him by pro-Moscow separatists in the Donbas.

A bigger shift and one likely to cause friction with other EU nations is likely to come over migration. Meloni has called for a naval blockade to prevent migrant boats from leaving North African shores, and has proposed screening potential asylum-seekers in Africa, not Europe.

Salvini has made clear he wants the League to recapture the interior minister post, where he once imposed a tough anti-migrant policy. But he may face an internal leadership challenge, with Meloni’s party outperforming the League even in its northeastern stronghold.

On relations with the EU, analysts note that for all her euroskeptic rhetoric, Meloni moderated her message during the campaign and has little room to maneuver, given the economic windfall Italy is receiving from Brussels in coronavirus recovery funds. Italy secured 191.5 billion euros, the biggest chunk of the EU’s 750 billion-euro recovery package, and is bound by certain reform and investment milestones to receive it all.

That said, Meloni has criticized the EU’s recent recommendation to suspend 7.5 billion euros in funding to Hungary over concerns about democratic backsliding, defending autocratic Prime Minister Viktor Orban as the elected leader in a democratic system.

French far-right leader Marine Le Pen praised Meloni for having “resisted the threats of an anti-democratic and arrogant European Union.”

Santiago Abascal, the leader of Spain’s far-right Vox opposition party, tweeted that Meloni “has shown the way for a proud and free Europe of sovereign nations that can cooperate on behalf of everybody’s security and prosperity.”

Meloni is chair of the right-wing European Conservative and Reformist group in the European Parliament, which includes her Brothers of Italy, Poland’s nationalist Law and Justice Party, Spain’s far-right Vox and the right-wing Sweden Democrats, which just won big there on a platform of cracking down on crime and limiting immigration.

“The trend that emerged two weeks ago in Sweden was confirmed in Italy,” acknowledged Democratic Party leader Enrico Letta, calling Monday a “sad day for Italy, for Europe.”

“We expect dark days. We fought in every way to avoid this outcome,″ Letta said at a somber news conference. “(The Democratic Party) will not allow Italy to leave the heart of Europe.”

Thomas Christiansen, professor of political science at Rome’s Luiss University and the executive editor of the Journal of European Integration, noted that Italy has a tradition of pursuing a consistent foreign and European policy that is bigger than individual party interests.

“Whatever Meloni might be up to will have to be moderated by her coalition partners and indeed with the established consensus of Italian foreign policy,” Christiansen said.