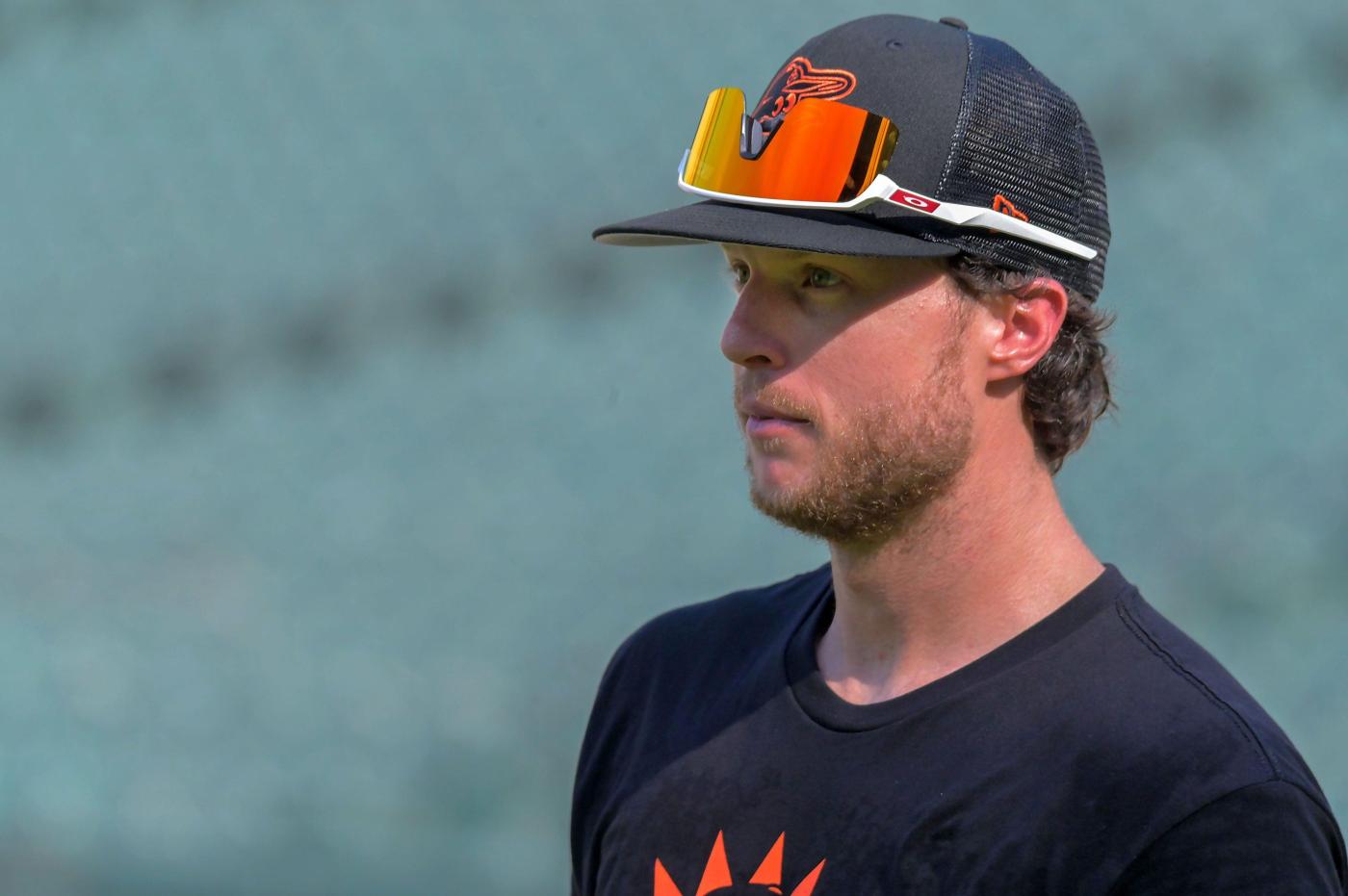 Back then, everyone knew Joey Krehbiel as “The Rocket.” No one threw faster than the 10-year-old right-hander did in Florida’s Seminole Youth Athletic Association, nor looked as cool skateboarding around the parking lot before and after games or flipping his flowing hair in perfect Justin Bieber fashion.

Brett Phillips was in awe.

Krehbiel was a rising star. Phillips, one year younger, was an admirer following close behind, but it didn’t take long to make himself known through his own accomplishments.

“He’s the one that would beat the records I would put up the year before,” Krehbiel said.

That competitive spirit blossomed into a friendship, one that carried through Seminole High School and travel baseball leagues and eventually made its way to Baltimore. . To this day, Phillips, an Orioles outfielder, remembers Krehbiel, an Orioles reliever, as “the best player that I grew up playing against and with.” Krehbiel agreed: “Some things don’t change.”

But plenty of other things have, apart from the sport they play and the friendship they share.

Last year on Twitter, Phillips shared a collage of photos from their baseball careers, starting with their time together in Florida at Seminole before overlapping in the minor leagues and, eventually, the majors. As the years go by, Krehbiel’s tattooed arm fills out, as do both of their beards.

It’s a journey neither expected to happen when they were just two friends playing a game. But that journey has led them here, now as teammates with the Orioles after a midseason trade brought Phillips to Baltimore. As they sat inside the dugout together Wednesday at Camden Yards, reminiscing on this path, they had to laugh at all that’s happened since they were 10 years old.

“Now I don’t have hair and can’t skateboard,” quipped Krehbiel, who reached the majors in 2018 with the Arizona Diamondbacks. “One extreme to the other.”

But they still have each other.

“I sometimes have to pinch myself, regardless of the circumstances of performance,” said Phillips, an outfielder who made his major league debut in 2017 with the Milwaukee Brewers. “Like, dude, you’re so freaking blessed. What the heck? You’re playing professional baseball with your best friend, we’re living together. It’s the coolest thing ever.”

When the Orioles arrive in Florida to play the Rays on Friday, the reunion goes beyond an early return for Phillips, who spent three years with Tampa Bay before the trade. It’s another chance to play baseball near their hometown just outside of St. Petersburg.

Krehbiel, 29, bet $20 that Phillips, 28, would have tears in his eyes when Phillips comes up to the plate at Tropicana Field and hears the anticipated ovation for a fan favorite and local product. And while Krehbiel lives “under the radar,” the former Rays pitcher is still excited to meet with his friends and family near the bullpen before each game of the series — a pivotal one between two teams fighting for an American League wild-card berth.

Each time he returns to St. Petersburg, Krehbiel hears from far more than just familiar faces. Residents of Seminole rally around him and Phillips, because that’s where this all began.

“Oh, we’re going to be good,” Phillips said of his expectations for that high school team.

“We never accomplished exactly what we were looking for, but we definitely had fun,” Krehbiel said.

“We won a lot,” Phillips added, jumping in when Krehbiel trailed off, before beginning a retelling of the time they “choked” in the playoffs during Krehbiel’s senior year and Phillips’ junior season. That was about the time the scouts began to line up routinely for games, watching Krehbiel pitch and play third base.

It jump-started the next stage of their careers — one they never saw coming. Each knew they were good at baseball, “but I had no idea what college was, draft, nothing,” Krehbiel said. “What are these steps?”

But Krehbiel would learn after being selected in the 12th round of the 2011 draft by the Los Angeles Angels. Phillips was there when Krehbiel was drafted, there when the scouts flocked to Seminole High School to see a late-rising prospect. And just as he watched Krehbiel skateboard after rolling through the competition in youth baseball, Phillips followed closely behind. A year later, he was picked in the sixth round by the Houston Astros.

“Especially our hometown, people thought it was easy,” Phillips said. “Like, what Joey did, people were like, ‘Oh, everyone’s going to get drafted now.’ I never thought that, because I saw how good he had to play and I respected it. But the people around us, did you get that vibe?”

“Yeah, the parents and stuff thought their kids, ‘Oh, Joey got drafted,’” Phillips continued. “And then when I went through the process and had the scouts lined up, I was like, ‘Wow, this may happen.’ But no one’s gotten drafted since. I obviously saw Joey go about his business every day. I saw what he had to do to get drafted and perform, and I wanted that for myself and to follow in his footsteps.”

Following Krehbiel’s footsteps has led Phillips to the same Orioles dugout, giving the lifelong friends a chance to sit next to each other and reminisce about every twist and turn of their journey.

What is it about the other that makes them so close? After all this time and so many teams, how are they still like the 9- and 10-year-olds with the Bieber hair, just beginning to form a bond?

“We’re very similar,” Krehbiel said. “Sharp-minded, always thinking, always finishing each other’s sentences kind of friendship. And what I lack, he has. And what he lacks, I have. It’s kind of like a —”

“It’s easy,” Phillips said, jumping in. “I’ve never gotten tired of hanging out with Joey, no matter how many times we have spent, it’s that friendship that fuels you.”

“We also treat it as a friendship, as if we were going to work at another job,” Krehbiel concluded. “It’s not like we’re friends through baseball or because of baseball.”

But baseball has played a central role regardless, and they’ve done what few other best friends have — made it to the top of the game with each other by their sides.