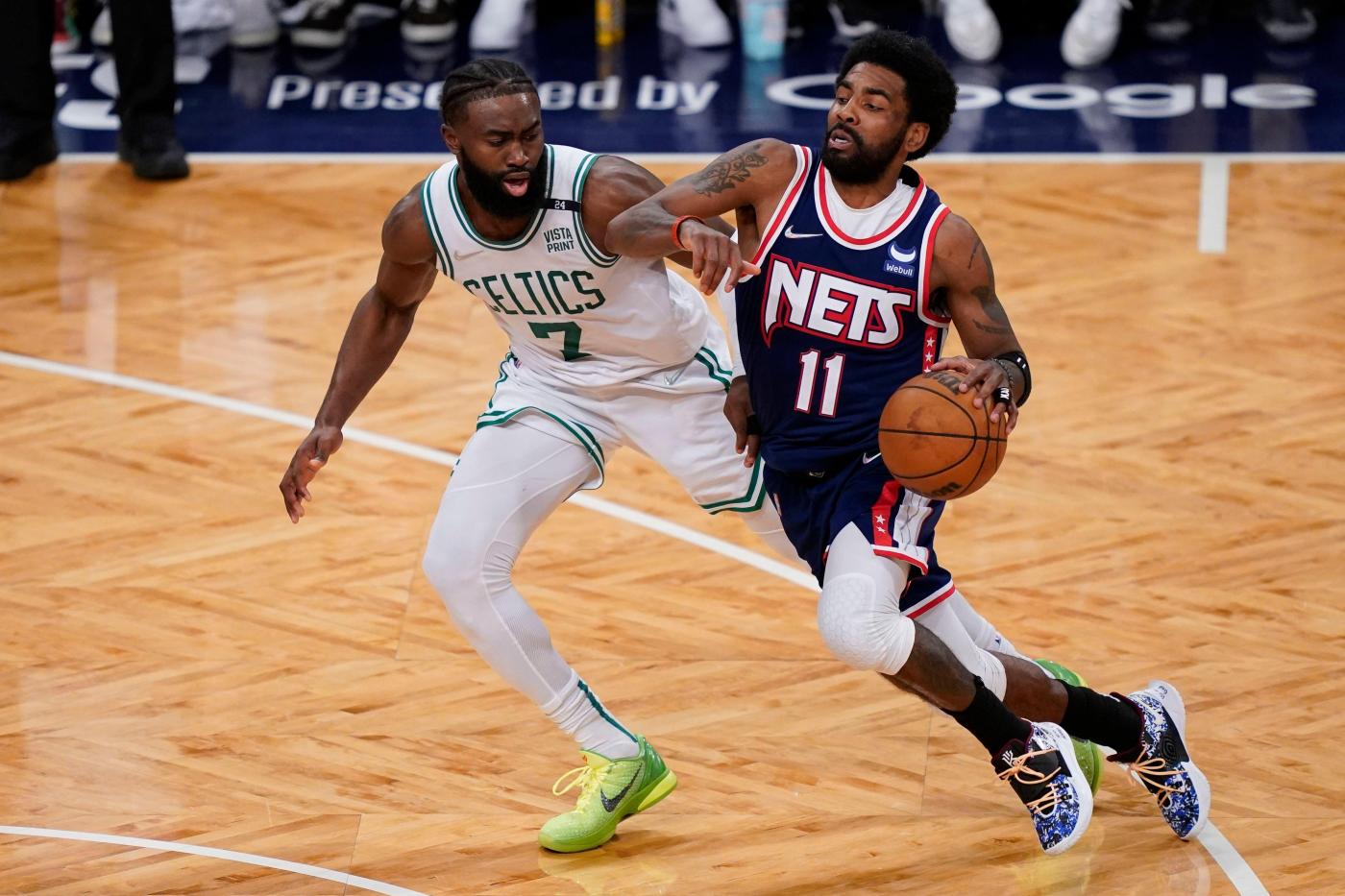 Irving has been ruled out for what will be his seventh consecutive missed game after the Nets deemed him “unfit to be associated with the” franchise for “failure to disavow antisemitism” following the controversial post of a movie rife with antisemitic tropes on his social media feeds.

Over the weekend Nets owner Joe Tsai told a local reporter Irving “still has a lot of work to do” to get back onto the basketball court. Brown quote-tweeted the report and called it alarming for multiple reasons.

“He didn’t say that the organization was working together to get Kyrie back on the floor. He said that he had more work to do,” Brown said Monday night. “And our society has more work to do.

“Including Joe Tsai,” Brown continued. “It’s 2022. It takes 10 minutes of time to see who these business owners, corporations, etc., who they’re associated with and who they’re doing business with, who they’re affiliated with.”

That line was a direct shot at Tsai, whose company Alibaba, reportedly supported China’s cultural genocide of the Uyghur Muslims.

Specifically, according to the ESPN report, Alibaba funded technology used by China to track its citizens. That technology was “used widely” in the area where over one million Uyghur Muslims and other ethnic minorities were forced into barber-wire camps for “re-education.”

Tsai’s quote came after sneaker giant Nike announced its plans to cut ties with Irving after the fallout surround his five-game suspension. Nike founder Phil Knight said Irving “stepped out of line” by sharing the film “Hebrews to Negroes: Wake Up Black America” on his social media channels.

Brown responded to Knight’s quote, tweeting: “Since when does Nike care about ethics?”

“I’m vice president of the union, and it’s part of my job to protect our players legally, Brown said Monday night. “And to see Phil Knight first come out and condemn Kyrie, and also see Joe Tsai say he has more work to do, I think it’s time for a larger conversation.”

As part of his suspension, the Nets listed six criteria Irving had to fulfill at part of the process to return back to the court. Those criteria included condemning the film, completing both sensitivity and antisemitic training, meeting with both the Anti-Defamation League and Brooklyn’s Jewish leadership, donating $500,000 to anti-hate causes and meeting with Tsai again.

Last week, Irving met with both Tsai and NBA commissioner Adam Silver. Silver, who is Jewish, told The New York Times he doesn’t believe Irving is antisemitic, but he also said: “Whether or not [Kyrie Irving] is antisemitic is not relevant to the damage caused by the posting of hateful content.”

Tsai reportedly said Irving “has to show people he’s sorry” and that “What’s important — and what people miss — is he only apologized after he was suspended.”

Brown said Irving is in a gray area because he posted the link to the controversial film without any caption.

“I think it’s uncharted territory,” Brown said. “I think it’s no distinction between what somebody says vs. what somebody posts, and I guess that’s what they are trying to figure out. The terms that the Brooklyn Nets instituted for his return, I voiced my discomfort.

Brown suggested Irving might not be willing to do much more apologizing than he has already done. He also suggested he’s willing to dig deeper into Tsai’s off-court history if terms surrounding Irving’s suspension stay the same.

“I’m not sure if [showing contrition] is something that Kyrie is looking to do,” Brown said. “I don’t think he meant any harm by posting it. Obviously, it came off as insensitive to a lot of people, but Adam came out with a statement: He doesn’t believe Kyrie Irving is antisemitic,” Brown said. “Joe Tsai came out and said a statement that they don’t believe he is antisemitic. Those are their words, so he has already apologized formally through his IG post.

Irving will miss the Nets’ matchup against the Sacramento Kings on Tuesday. Brooklyn travels to Portland next to complete its four-game West Coast road trip against the Trail Blazers on Thursday then returns home to host the Memphis Grizzlies on Sunday.