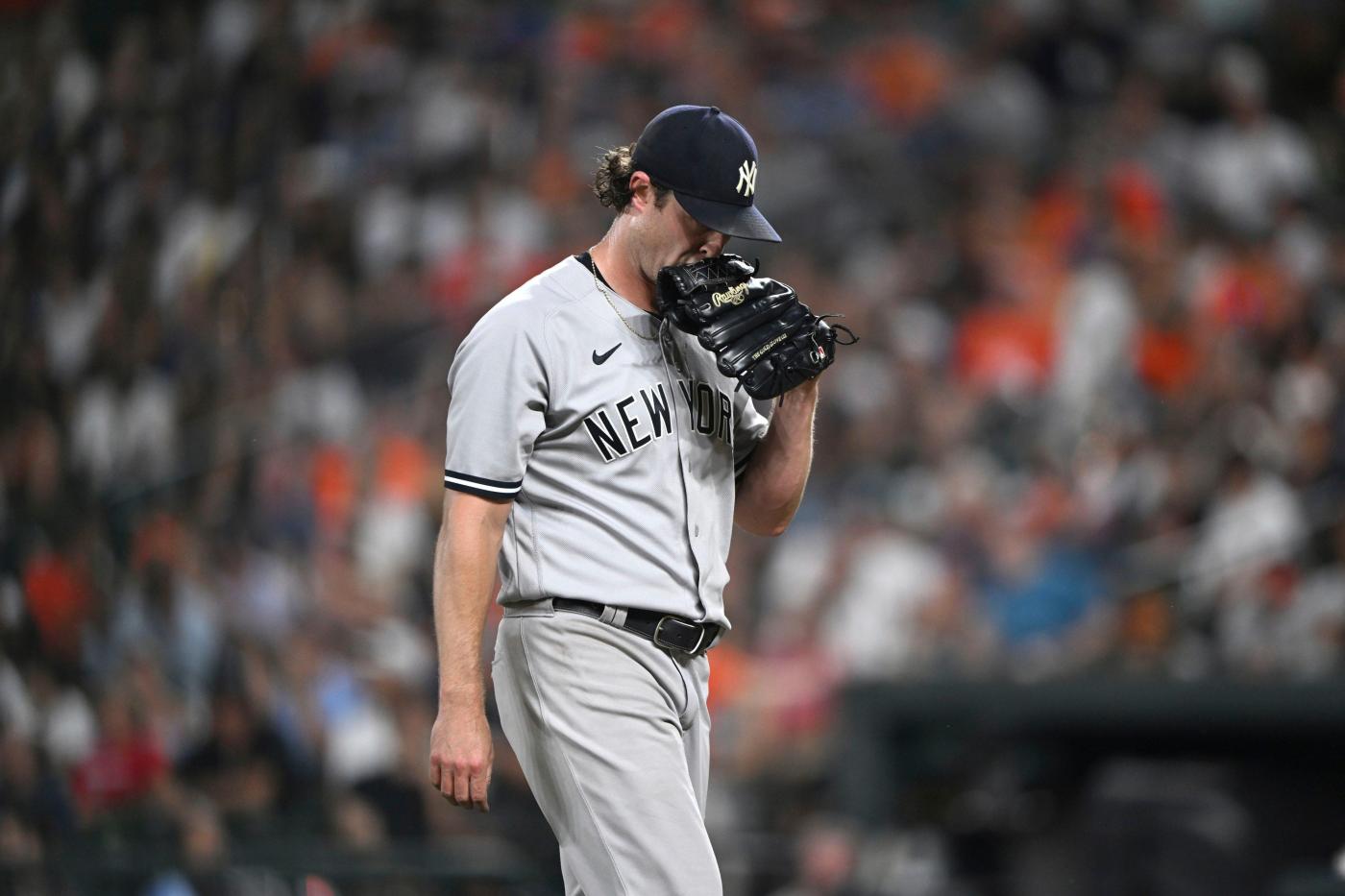 The Yankees paid Gerrit Cole $324 million to be one of Those Guys. Only he’s not, at least not so far.

Cole is a big guy and obviously has a big arm. He has shown flashes when he does make you recall Buck Showalter’s definition of an ace: “You know one when you see one.” But how often do you really feel that way when you see Cole, who has already had five starts this year when he gave up five runs, and another game in Detroit one cold night when he didn’t make it out of the second inning?

It’s not all Cole’s fault that he hasn’t been the kind of stud game-changer that his old teammate in Houston, Justin Verlander, continues to be. Cole showed a lot of heart and stuff and arm the night the Yankees lost Game 5 to the Rays in 2020, at the end of that short season. But when Cole was once again asked to win the kind of game he was hired to win, against the Red Sox in the Wild Card game last October at Fenway, he didn’t make it out of the third inning.

To be sure, nobody is writing him off, that would be nuts. He is going to be around, for a very long time. But off what we have seen so far, he is not the Yankee ace CC Sabathia was back in 2009, the last time the Yankees won it all. He is not the Game 6 starter that Verlander pitched against the Yankees in the American League Championship Series of 2017.

There are going to be other chances for Cole this October, because the Yankees, despite looking as wobbly as they have over the past 30 games — it’s a lot — are going to win the AL East. So when Cole gets the ball in his first postseason start this time, he’s going to get it at the Stadium.

But let’s say it is him against Verlander with all the money on the table in another Astros-Yankees ALCS showdown. Who would you put your money on?

You already know the answer to that one.

You know who Cole has been so far in pinstripes? He’s been a better Masahiro Tanaka, whom the Yankees once paid half the money they paid Cole, but was brought to the Stadium to be exactly that kind of game-changer.

This week the Yankees had a chance to win a series against the Mariners, a team they might have to face in the postseason, and whose own Game 1 playoff starter will be Luis Castillo, whom the Yankees coveted, and mightily, at the trade deadline (and why did they? Because Brian Cashman, and stop me if you’ve heard this one before, doesn’t think he has enough starting pitching). Cole got the ball. It was 6-0, Seattle, after the top of the first. It was the second time this season that Cole has given up three home runs in an inning.

“There were bad pitch selections,” Cole said. “There were some bad pitches and we got punished for it again.”

When you look back at Cole’s season you see that a quarter of his starts have gone like this, when he and the Yankees have gotten sunk by one bad inning. But guess what? Those bad innings count. The good news, if there is any? In what have been six Hefty-bag starts for their ace, the Yankees have only lost two of those games, because the Yankees have hit themselves past Cole’s bad pitches and bad pitch selections. But you know when they couldn’t? In that Wild Card game against the Red Sox.

There is so much more season to be played. So many more chances for Cole in big spots, maybe even when the Mets come to Yankee Stadium. It is not that he is having a bad year. He is just not having a great year; not having a $324 million year. Is it unfair to judge him against his contract? No, it is not. You are what your record says you are on payday. His record for now is 9-4 this season, with a 3.56 earned run average, on what is still one of the best teams in the sport this season.

“Thought he was awesome. Couldn’t be any more excited about what he’s going to bring to our ballclub, the stability, taking the ball every fifth day and the confidence and the stuff.”

And here is what Aaron Boone said about Cole’s first six-run first inning:

“Just a tough inning where he was struggling to just find his command and his rhythm and getting all his pitches. Unfortunately, we’re behind the eight ball there and then [he] pitched really well from there.”

Again: That is fine in August. Doesn’t work that way in October. My Yankee-fan friend PC, hardly an alarmist, emailed this to me after the Seattle game:

“Would you be shocked if Cole started to pitch them right out of things in Game 1 of an ALDS?”

Cole is still just 31 years old, about to turn 32 in September, which means six years younger than Mr. Scherzer of the Mets, who absolutely showed you what one of Those Guys look like in Game 1 between the Mets and Yankees last week. Cole has the arm to go out in a big game and pitch the way someone like Josh Beckett did against the Yankees in Game 6 of the 2003 World Series, Yankees against the Marlins, when Beckett basically said, “Here it comes, see if you can hit it.”

Nobody is writing off Gerrit Cole, not with his talent. He has shown flashes of brilliance, and at his best seemed capable of striking out the world.

Again: Whole lot of season left, the way there’s a whole lot of his contract left with the Yankees. He isn’t just talented, he is always accountable, and that matters in the big city, more than somewhat. He is going to get a lot of chances to be one of Those Guys, to be what Scherzer so clearly is across town. But to paraphrase an old line from the late, great George Young, it is about time for the Yankee ace to start ace-ing.

A TREASURED EMAIL FROM VIN, NOTHING TO LOVE WITH PHIL & JUDGE WRONG ON DESHAUN …

Here is another email I received once from my friend Vin Scully, from a collection of emails that I will always treasure now that he’s gone.

I asked him to compare the experience of fans coming out to have the Shohei Ohtani experience to the way fans had once flocked to Dodger Stadium to watch Fernando Mania with Mr. Valenzuela:

“FERNANDO FAN TREATED A TRIP TO DODGER STADIUM LIKE A RELIGIOUS EXPERIENCE. THERE WAS A FEELING THAT A MEXICAN FAMILY TOOK THEIR CHILDREN TO THE GAME TO BE INSPIRED BY A POOR MEXICAN BOY WHO BECAME GREAT. AT LEAST THAT’S THE WAY I SAW IT BACK IN THE 80′S. AS FOR OHTANI, IT REMAINS TO BE SEEN.”

As always, you look at his words and hear them immediately, in the most unforgettable baseball voice of them all.

Is Kevin Durant happy yet?

I’m just going to keep asking until I’m sure that he is.

So much of Tuesday night’s election results, especially in places like Arizona and Michigan, felt like the Bottom Feeders Ball.

So, wait, these Yankees might not turn out to be the ‘27 Yankees?

Hey, we kid because we love.

So now these grifters from the Blood Money Tour want their blood money and they want to participate in the FedEx playoffs?

It doesn’t work that way.

Or at least it shouldn’t.

It is worth noting that Phil Mickelson has lent his name to the lawsuit filed by the grifters against the PGA Tour.

It is just one more event to move Mickelson further and further away from the goodwill and even the love he generated after he won the PGA at the age of 50.

One more thing on the Saudi Tour, which has about as much drama as your country club’s member-guest:

Name a single player on it whose best golf is ahead of him.

Pretty quiet on the Daniel Jones front so far at Giants training camp.

I am going to remind all the people who think the Mets didn’t do enough at the trade deadline to please remember that when the Red Sox won it all in 2004, here were the two players they picked up at the Deadline:

I know what the rules say about tampering, but it makes no sense that the tamperers in this case — Dolphins — get clipped the way they do and the tamperee — Tom Brady — walks away without a scratch.

It is usually difficult to side with the National Football League, on almost anything, but Roger Goodell is on the right side of the league’s appeal of Deshaun Watson’s suspension.

Just because a judge gave Watson a soft place to land doesn’t mean she was right.

Calvin Ridley, wide receiver, gets a whole season because of $1,500 in legal parlay wagers on games in which he wasn’t involved, and Watson gets six games for inappropriate conduct with over two dozen masseuses.

That’s not a righteous judgment.

Watson ought to go for the whole season.

My friend Stanton wants to know something: If you think Watson is getting this kind of pass, at least for the time being, what about the pass Washington owner Daniel Snyder keeps getting?

My parents celebrate their 72nd wedding anniversary this Friday.

It is a number that perfectly fits the two of them, which means a miracle and blessing worth celebrating, for a grand married life that began in 1950.